The sound of touchdown

Sensors in the feet of Rosetta’s lander Philae have recorded the sound of touchdown as it first came into contact with Comet 67P/Churyumov-Gerasimenko. The instrument, SESAME-CASSE, was turned on during the descent and clearly registered the first touchdown as Philae came into contact with the comet, in the form of vibrations detected in the soles of the lander’s feet.

Note that this is an actual sound file; i.e. it is a recording of mechanical vibrations at acoustic frequencies. No modification was necessary except for some technical adjustments (e.g. the .wav format requires amplitude normalisation). Actual frequency content and duration are unchanged. 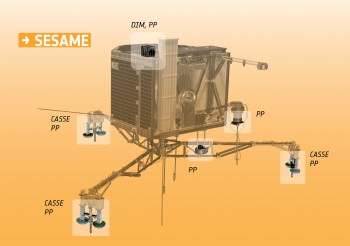 Focus on SESAME. Sensors are located in the three feet as well as in the units of the APXS (centre) and MUPUS-Pen (to the upper right of centre) instruments. Credits: ESA/ATG medialab

Data from the SESAME-DIM instrument meanwhile suggest that current cometary activity at the final landing site is low, while preliminary data from SESAME-PP are consistent with a large amount of water ice under the lander. Combined with additional data from other instruments, the goal is to derive mechanical properties of the comet. However, first impressions already suggest that the surface of 67P/C-G is significantly structured, mixing soft and hard aspects.

Klaus adds: “At the moment, we are also supporting the effort to reconstruct the flight path of the lander after first touchdown, collecting all available data across the various instruments. This is important for SESAME, especially CASSE, as we need to know the speed, impact angle, and rotation rate before the first touchdown, but also the final landing place.”