Did Philae drill the comet?

Philae’s Sampling, Drilling and Distribution (SD2) subsystem was activated towards the end of the surface operations that Philae performed on Comet 67P/Churyumov-Gerasimenko last week, despite fears that it might alter the lander’s precarious position following its third touchdown. Here we present the latest update from the SD2 team.

SD2’s goal was to drill into the comet surface in order to collect and deliver samples to the COSAC and Ptolemy instruments inside the lander (Click here for our introductory post on SD2). It was the last of the lander’s ten instruments to be operated. 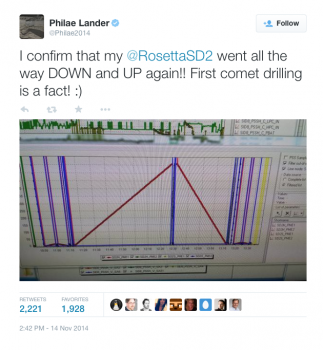 @Philae2014 tweeted that the drill was activated as planned

SD2 principal investigator Amalia Finzi has reported that the drill was deployed as planned, extending 46.9 cm below the balcony of the lander and 56.0 cm from its reference point.

Although the ovens worked correctly, the scientists do not yet know how much – if any – material was actually delivered to the ovens by SD2, or whether the instruments sampled dust or gas that entered the chamber during the touchdown.

Because Philae was not anchored to the comet surface, it is also possible that, if the drill touched a particularly hard surface material, it moved the lander instead of drilling into the surface. Furthermore, the SD2 instrument lacks dedicated sensors to determine whether or not the surface has been reached, whether a sample was then collected in the sample tube, or if it was then discharged into the oven.

But other instruments on board Philae can help understand what actually happened. For example, the downward-looking ROLIS camera obtained two images of the surface under the balcony, one before and one after the lander’s main body was lifted and rotated. Because of those movements, the SD2 ‘footprint’ may be included in those images and thus may be able to provide visual evidence that the drill interacted with the surface. We hope to be able to provide an update on this soon.

As for whether COSAC received a sample from the drill, the analysis is on-going.

“As far as we can see at the moment, SD2 and COSAC telemetry cannot reliably discern between lack of sample and insufficient gas generation from it,” says Amalia. “A CIVA-MV/MI image would have been needed for this purpose, which was not available for the first sample.”

Meanwhile, COSAC’s analyses on the data acquired from its surface measurements are on-going. But it is apparent that COSAC already ‘sniffed’ the comet’s atmosphere during the first touchdown, detecting organic molecules. The Ptolemy instrument is also reported to have successfully collected the ambient gases of the comet. Analysis of the spectra and identification of the molecules detected by both instruments are continuing.

Mario Salatti, Philae Program Manager for ASI adds: “We are all hoping that Philae wakes up and we can perform many more measurements on the surface of the comet, including the chance to drill again with SD2. The final site where Philae landed does not enjoy long exposure to sunlight, but on the other hand, it opens new perspectives. As the lander appears to be currently shielded by walls, the local temperature may be lower than it would have been at the chosen landing site. So if Philae wakes up, it might remain operative much longer than expected, possibly until perihelion, which is extremely exciting.” 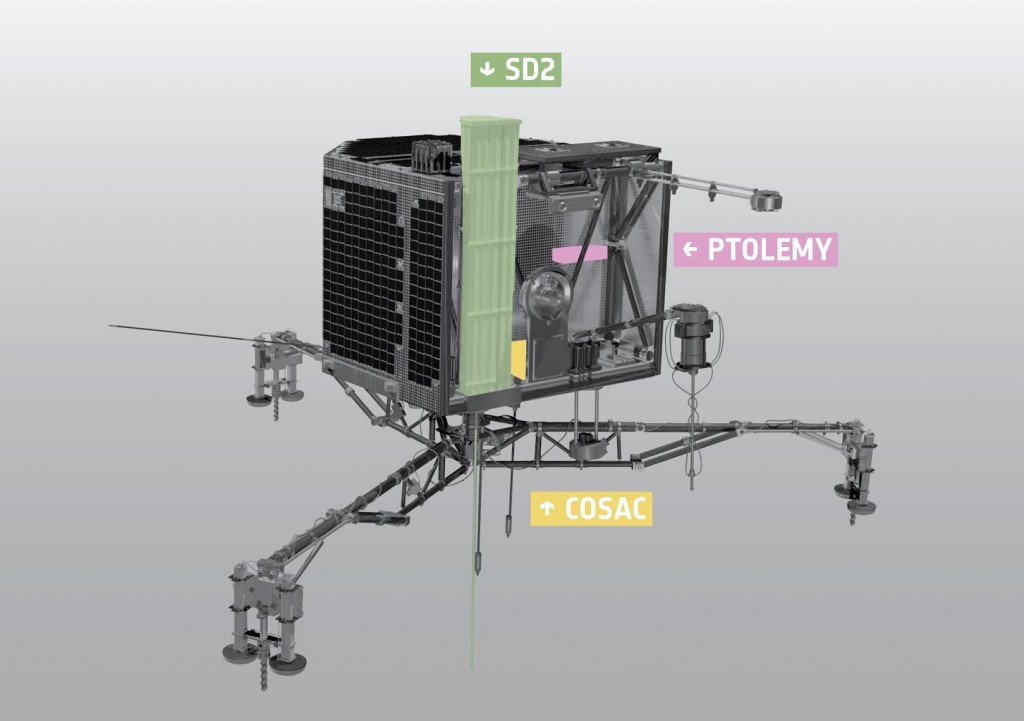 The SD2 (Sample Drilling & Distribution) instrument was conceived by technologists at the Italian Space Agency, designed and developed by the SELEX ES in Milan, under the scientific responsibility of the Principal Investigator Prof. Amalia Ercoli Finzi from Politecnico di Milano: for more than 10 years, SD2 team has been planning SD2 operation sequences and validated them with the unit spare available at their institution’s laboratories.