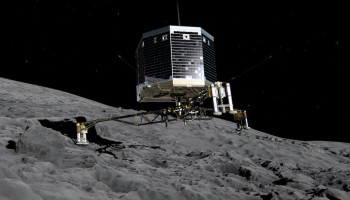 ESA’s Rosetta mission has soft-landed its Philae probe on a comet, the first time in history that such an extraordinary feat has been achieved.

After a tense wait during the seven-hour descent to the surface of Comet 67P/Churyumov–Gerasimenko, the signal confirming the successful touchdown arrived on Earth at 16:03 GMT (17:03 CET).

The confirmation was relayed via the Rosetta orbiter to Earth and picked up simultaneously by ESA’s ground station in Malargüe, Argentina and NASA’s station in Madrid, Spain. The signal was immediately confirmed at ESA’s Space Operations Centre, ESOC, in Darmstadt, and DLR’s Lander Control Centre in Cologne, both in Germany.