Rosetta lined up for lander delivery

Rosetta conducted an important manoeuvre this morning that shifted it onto the orbit it will maintain until 12 November, when Philae is set for dispatch to the surface of comet 67P/C-G.

The thruster burn took place starting at 02:09:55 UTC (03:09:55 CET), ran for 90 seconds and, based on an initial analysis of spacecraft radiometric data, delivered a delta-v – change in speed – of 9.3 cm/sec, as confirmed by the Rosetta Flight Dynamics team.

It was the second and final of two ‘deterministic’ (i.e. direction and thrust are prepared in advance) manoeuvres that moved Rosetta onto the planned lander delivery orbit, now at a height of about 30 km, which will be maintained right up until the pre-delivery manoeuvre at two hours before separation at 08:35 UTC (09:35 CET) on the morning of 12 November.

Note that mission control team at ESOC expect to conduct some additional, minor ‘touch-up’ burns between now and then just to maintain Rosetta on this orbit; these will not significantly change the orbit.

It’s also interesting to note, as mentioned by mission scientist Matt Taylor, that this moves Rosetta away from the closest bound orbits (10km) we will ever achieve during the mission.

“From now on, the closest distances we will achieve will be via flybys to provide the science instruments on the orbiter the closest look at the comet.”

As mentioned, the next planed orbit-changing manoeuvres will occur on the 12th at (a) 2 hours before separation and (b) about 40 minutes after (see animation below), in between which Philae will be released.

The pre-delivery manoeuvre will shift Rosetta’s trajectory so that the orbiter would be on a path so as to pass over the comet at a distance of 5 km, while the separation will occur at 08:35 UTC on board the spacecraft about 22 km (the confirmation signal will arrive on Earth at 09:03 UTC).

The second manoeuvre will cause a deflection of the Rosetta trajectory away from the comet; it will occur 40 minutes after separation, and help guarantee visibility of Philae at touchdown.

Lined up for lander delivery

All in all, today’s burn means that the mission is lined up for lander delivery!

One of the questions frequently posted here in the blog (and via other channels) asks about the delivery height. Why is it set for 22.5km?

We passed the query to Rosetta Flight Director Andrea Accomazzo at ESOC, and he provided the answer below, with inputs from Vicente Companys from the Flight Dynamics team.

There were many constraints to take into account when designing a viable descent trajectory for Philae.

The accuracy of the landing does not depend on the distance to the comet, but rather is a combination of the position and velocity errors of Rosetta at the last time its orbit is controlled (two hours before separation in the selected strategy) and their propagation up to touch-down time.

Flying closer to the comet is not necessarily more accurate than further away; thus initial navigation errors and time to touch-down have to be accurately balanced.

Further to this, the selected separation strategy foresees a fixed separation velocity of approximately 0.187 m/s. This imposes limitations on the capability of directing Philae towards the comet, i.e. it restricts the domain of possible positions and velocities for Rosetta at the time of separation.

If Rosetta were to release Philae from any closer distances, then it would have to fly with lower velocity to be able to direct Philae towards the comet (and still maintain the minimum safety distance). By reducing the velocity of Rosetta, however, we would have two negative effects:

•    Rosetta would not fly on an hyperbolic trajectory with respect to the comet; therefore the spacecraft would potentially fly towards the night side of the comet, which we want to prevent
•    The time from last orbit control manoeuvre to touch-down would increase, thus increasing the time over which navigation errors would propagate, affecting landing accuracy

In preparing the delivery operation, several options were analysed and the selected one is the one giving the best results in terms of landing accuracy and fulfilment of constraints.

•     Rosetta will start off on a slightly elliptical orbit at about 30 km distance from the comet centre
•     About two hours before separation, a manoeuvre will move Rosetta onto an hyperbolic orbit flying in front of the comet and with a miss-distance of about 5 km from the comet centre
•    Forty minutes after Philae separation, when Rosetta is at about 20 km distance from the comet, another manoeuvre will move Rosetta away from this orbit and move it to a region that guarantees visibility of Philae at touch-down 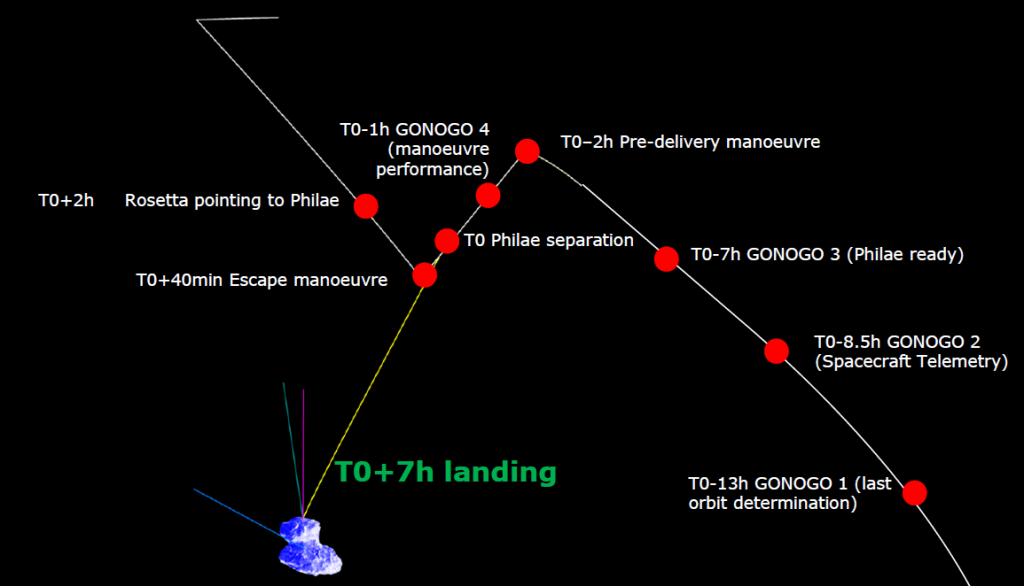