Editor’s note: The Rosetta mission control team are transitioning Europe’s intrepid craft onto the next stage of cometary operations: the Global Mapping Phase (GMP). The update below is based on inputs provided by Flight Director Andrea Accomazzo at ESOC and Project Scientist Matt Taylor at ESTEC.

Before you read today’s post, take a quick look at our trajectory video to refresh your memory (we know you’ve already seen this – but it’s a very helpful aide memoire), which illustrates what Rosetta is doing now (skip through to the 00:58 – Global Mapping)

We are now in the Transition to Global Mapping (TGM) phase, that is, the two hyperbolic segments of the trajectory that move us from the 50km pyramid of the Close Approach Phase (CAT) to the 30-km gravitationally bound orbit of the Global Mapping Phase (GMP).

“The aim of GMP is to get as close as we can and gather as high-res science data as we can to best characterise the potential landing sites – helping us to make the best decision on prime and backup and really start to understand what kind of thing we’re dealing with,” says Fred Jansen, ESA’s Rosetta Mission Manager.

“It’s a real synthesis of operations, science and analysis that is a first in many ways.”

On Wednesday, 10 September, 09:00 UTC (11:00 CEST) the spacecraft will be at the terminator plane (the plane passing through the centre of the comet and perpendicular to the Sun direction) and will perform a 19-cm/s manoeuvre (thruster burn) to insert the spacecraft onto the 30-km circular orbit.

“The orbital plane is 60 degrees away from the Sun’s direction and is such that we will orbit over areas of the comet in their ‘morning hours’,” says Andrea Accomazzo, Rosetta Flight Director.

“This results in orbits with periods of exactly 14 days. However, we will not fly all of each orbit!” 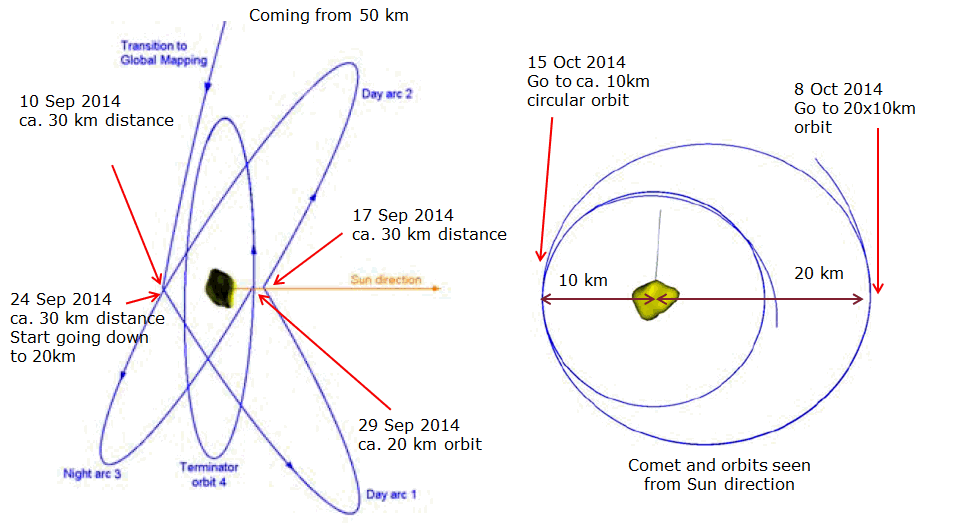 Andrea explains that, instead, after 7 days (i.e. when we are again on the terminator plane) we will conduct a manoeuvre (thruster burn)that  will change the orbital plane such that it will have the same characteristics as the previous orbit – but flying over ‘afternoon areas’ of the comet.

This will be the last time we fly bound orbits in front of the comet (see explanation below).

At the end of this second 30-km arc, we will let the spacecraft go onto the night side, just before dawn, to afford the instruments a look at the thermal characteristics of the comet.

Just before entering ‘night’ arc, we will do a small manoeuvre to lower the orbit such that when we come out again, that is crossing the terminator plane five days later, we will be at just 20km.

This manoeuvre, set to take place on 29 September, is actually subject to a GO/NOGO decision to be made on Thursday, 18 September, because we want to see how the spacecraft flies, and what conditions we encounter, at 30km for a week before we decide to go down any further.

If conditions and performance dictate that we should not go any closer, we will continue until just before lander delivery in our 30-km orbits.

“Once we reach the terminator plane at 20km, another small manoeuvre will set the orbital plane to coincide therewith,” says Andrea.

This is done in order to expose the minimum spacecraft surface (body plus leading edge of the arrays) to the gas flow emanating radially from the comet (if we were flying, for example in front of the comet, then the big 16-m long solar arrays would be exposed face-on to the flow).

Similarly, on 6 October (after having been for one week at 20km), we will again have a GO/NOGO decision as to whether we go down to 10km.

If so, on 8 October, another manoeuvre will change the orbit to 20x10km and once down to 10km on 15 October, we will circularise there.

This orbit would then be the one maintained until 26 October when we will start phasing the orbit for the lander delivery.

ESA’s most intense science operations ever

While the description so far of the spacecraft’s operational orbit evolution may sound relatively straightforward (we’ve left off many details on the intensive flight control and flight dynamics team work going on behind the scenes), it is especially important to understand that there is a related and massive level of science operations activity taking place.

The multiplicity of possible orbits (the aforementioned 30- 20- and 10-km orbital levels) make the planning for scientific observations immensely challenging since, given the lead time necessary for science operations planning, the Rosetta Science Operations Centre (RSOC) at ESAC, Madrid, Spain, will have to provide a separate plan, for all instruments, for each case.

“We are in the most intense science operations activity ever for ESA,” says Matt Taylor.

“The workload and the need to coordinate science planning with potential spacecraft orbits – all while venturing into the unknown of an entirely new comet – are challenging to say the least.”

“We are working on two parallel plans for post-landing also.”