Half way through the burns!

Five down, five to go! We’re now half way through the rendezvous burn manoeuvres needed to put Rosetta on course with comet 67P/Churyumov-Gerasimenko, and tomorrow will check off the sixth.

Tomorrow’s burn is also the second of four so-called ‘Far Approach Trajectory’ (FAT) burns that are being conducted once a week in the period 2-23 July.

Last week’s FAT burn performed well: it ended about one minute earlier than expected but the target change in velocity of 58.7 m/s was achieved. 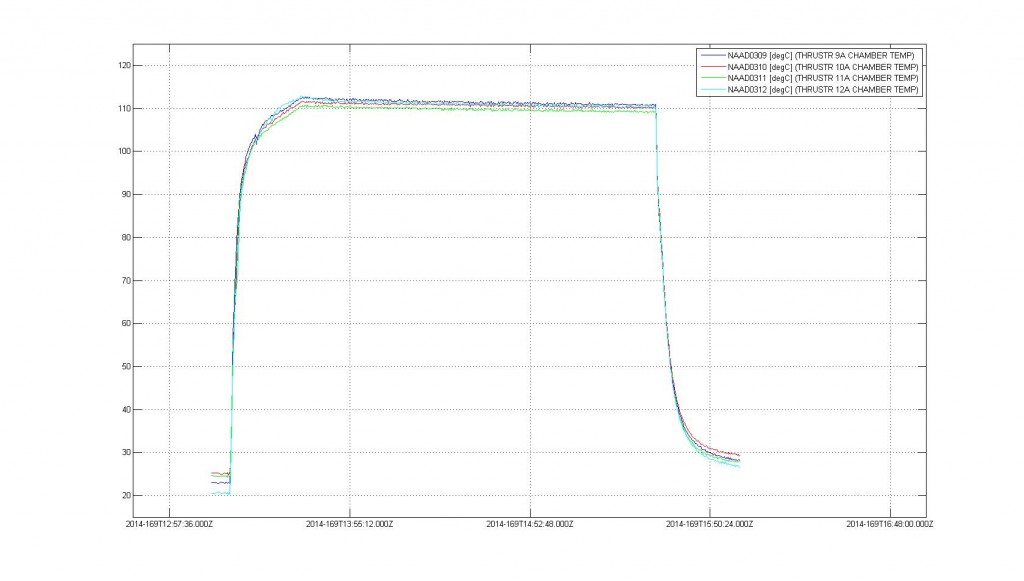 The team will be looking for the rise in thruster temperature to indicate that the burn has begun; similarly, a decrease indicates it is complete. The plot shown above is from the last of the three “big burn” manoeuvres, on 18 June.

Tomorrow’s burn will reduce Rosetta’s velocity relative to the comet by 25.7 m/s. In total, Rosetta has to slow down by 775 m/s to reach a relatively velocity of less then 1 m/s by 6 August.

Today, 8 July, there’s 25 000 kilometres between the spacecraft and the comet, and the relative velocity is 44.4 m/s; the remaining 18.7 m/s will be reduced in smaller and smaller increments between now and arrival. However, despite their diminishing size, the remaining burns are no less important; if no further manoeuvres were carried out, the closest approach to the comet would occur on 14 July at distance of 4912 km, that is, we would have a flyby!

We’ll let you know how the burn went as soon as we can afterwards via our twitter spacecraft @ESA_Rosetta. And we’ll have a new image of the comet to share on Thursday!

More about the FAT burns in last week’s post: Burning down to comet rendezvous