One week of Rosetta Truckin’

The Rosetta Truck has been on the road for one week, covering two cities in Finland, two in Norway, more than 2000 km of driving and receiving about 3600 people – Space Trucker Jari Makinen has the first report from the road:

The tour has so far been a great success! The first city visited, Vaasa, in Finland, was bathed in sunlight and in addition to general public, the media also visited the truck and the Rosetta and the tour were featured on TV news and local media. In Oulu the truck met the dinosaurs in the new exhibition called Age of the Dinosaur that opened in the Tietomaa Science Centre just a day before. Especially families flooded ito the truck and two guest stars form the Finnish Meteorological Institute had a full day of explaining their participation in Rosetta and the mission in general. Meanwhile Space Trucker Tuukka and I ‘cooked’ comets with dry ice. 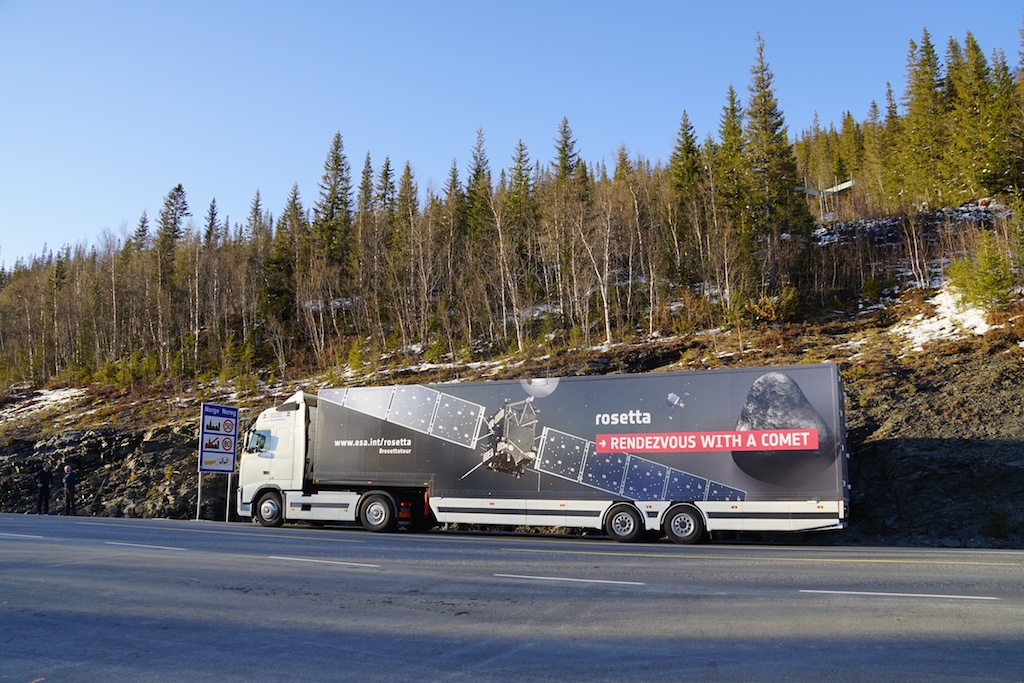 We left Oulu in the evening for a long trek towards Norway. Kari, the driver, took the truck through the Norwegian highlands to the campus of the Technical University of Trondheim on Sunday and the doors were opened on Monday morning – still in striking sunshine – for the students and general public. Gerhard Schwehm, a leading scientist of the Rosetta mission, met the truck in Trondheim and gave three lectures during the day. 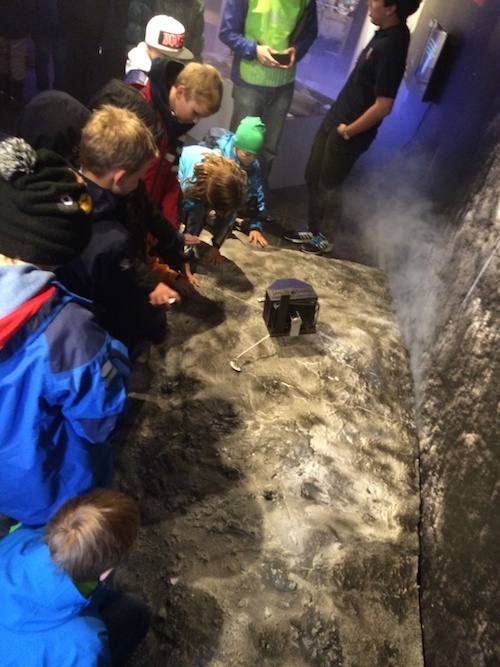 Young visitors learning about comets and the Philae lander. (Onboard the truck is a 1:4 scale model of Philae)

After another day in Trondheim the truck continued towards Oslo and during the drive through spectacular landscapes the truck entered rain and cold weather that persisted during the whole visit in Oslo. But the warm atmosphere of the University of Oslo made the visit not only pleasant, but also very hectic. During the first day, Wednesday, the lectures and presentations were held at the university, but the truck was the centre point of the campus square and around 800 people visited. Students from the physics and astronomy departments of the University took care of the guiding and comet cooking, making the day surely unforgettable also for them. The doors opened with a live radio programme on national network and closed at 8pm.

The second day, Thursday, was shorter and the truck was prepared again for a transfer in afternoon. But still about 500 people came in to learn about the mission, cook the comets and wish “god tur” for Rosetta and the Rosetta truck.

We also received a special addition to the tour: ESA Kid’s mascot Paxi, who is looking forward to meeting young Rosetta fans.

This weekend and next week the truck will tour Sweden and Denmark, with the highlight of the tour in Gothenburg Science Festival on Saturday and Sunday.

More info and schedule – now updated with “open truck” times – here. Don’t forget to tweet us your photos using the #RosettaTour hashtag if you spy the truck on the road!

Credit for all images: Jari Makinen.