A light-speed voyage to the distant future

In January, over 200 of you sent us video ‘selfies’ as part of ESA’s Wake Up Rosetta campaign, with the videos collectively receiving some 75 000 votes. It was a genuine pleasure for us to award some cool prizes to the top winners.

As the final step in the prize awards, we’re preparing to transmit the top 10 video selfies into space, using one of ESA’s tracking stations that regularly communicates with Rosetta, sending them on a light-speed journey far into deep space. 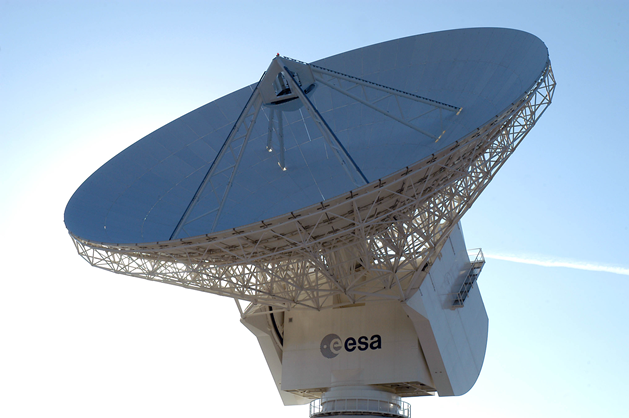 Here’s how it’s going to work

On 15 May, ESA’s 35m deep-space tracking station located at Cebreros, 77 kms west of Madrid, Spain, will transmit a 35MB archive file containing the Top 10 video selfies submitted during the Rosetta Wake Up campaign. (If you’d like, you can download the actual file that will be transmitted here.)

Cebreros is part of our Estrack network and is normally used to send telecommands to, and receive scientific data from, missions such as Mars Express, Venus Express, Rosetta and Gaia. In the future, it will be used for missions like BepiColombo, ExoMars and Juice, that are going to Mercury, Mars and Jupiter, respectively.

All Estrack stations are remote controlled from a specialised control room, the ECC (Estrack Control Centre), at ESOC. A team of station operators are on shift 365 days per year, ensuring receipt of precious data from spacecraft operated by ESA and numerous partner agencies.

For the purposes of this transmission into space, the station will be configured as follows:

For 15 May, since Cebreros isn’t actually transmitting to a spacecraft, the bitrate can be set as high as possible for the station, to 250 kbps – this is just a fraction of the bitrate of a typical home DSL Internet connection (~ 5000-10000 kbps), but for space, it’s pretty darn fast!

Since they’re located in Spain – and they were one of our Top 10 Wake Up Rosetta participants – we’ve invited a group of students from Colegio Público (Peñaluenga) De El Castillo De Las Guardas, near Seville, to make a bus trip to ESA’s ESAC Establishment, near Madrid, to help our Estrack engineers send the signal.

The students and their accompanying teachers, by the way, are totally excited and looking forward to the trip. The school has a very active science studies programme and focuses on STEM, so we are really pleased to be able to have them as guests. It’s not every day you get to send a transmission into the future!

Upon their arrival on the morning of 15 May, we’ve planned a guided tour of the Rosetta Science Operations facilities and the Villafranca 15m Estrack station. After lunch, at 14:00, the Cebreros station manager, Lionel Hernandez, will meet the students and provide a briefing on how we communicate with spacecraft in deep space and how Estrack stations help ESA gather scientific date from the Solar System.

At about 14:40, we’ll gather the students into one of the Villafranca station engineering rooms, and they’ll go on the voice loop with the Estrack Control Room at ESOC. After a short count-down, we’ll get the students to give the SEND command, and the ECC team will switch Cebreros transmit ON.

Where will the signal go?

It’s difficult to say with any certainty how far the signal will go, given the low-ish transmit power and the probability of being attenuated to undetectable levels in the future.

But here’s a quick listing of where the signal may go, put together by Markus Landgraf from ESA’s Mission Analysis team.

Below I have put together a table of times and objects that lie approximately along the path of the signal, assuming it is emitted from CEB on 15 May 2015 12:40 UTC.

OK – even if the signal doesn’t reach any where near the edge of the Universe, it’s pretty cool to think that it might!

Cebreros station (DSA 2) was inaugurated in 2005 and is the second in the Agency’s trio of 35-metre deep space stations; the other two are in New Norcia, Australia (DSA 1), and Malargüe, Argentina (DSA 3). The three are some of the world’s most sophisticated and technically advanced tracking stations used for satellite control, and are capable of communicating with missions orbiting as far away as Jupiter, i.e. up to about 3 to 4 AU.

They are part of ESA’s Estrack network, a worldwide system of ground stations providing links between satellites in orbit and our ESOC operations centre in Darmstadt. The core Estrack network comprises 10 stations in seven countries.

Watch Cebreros station in action via our dedicated webcam (offline for maintenance 8-9 May).

Here’s a low-qual (but very nice, IMHO) video I shot several years ago showing Cebreros station swinging into action for a pass with Mars Express: