On 22 November 2016, the NASA radio system on ESA’s Trace Gas Orbiter (TGO), which arrived at Mars in October, succeeded in its first test of receiving data transmitted from NASA Mars rovers, both Opportunity and Curiosity. Below we’ve posted an extract from the JPL web news article with some additional tech details from the TGO mission team at ESOC. 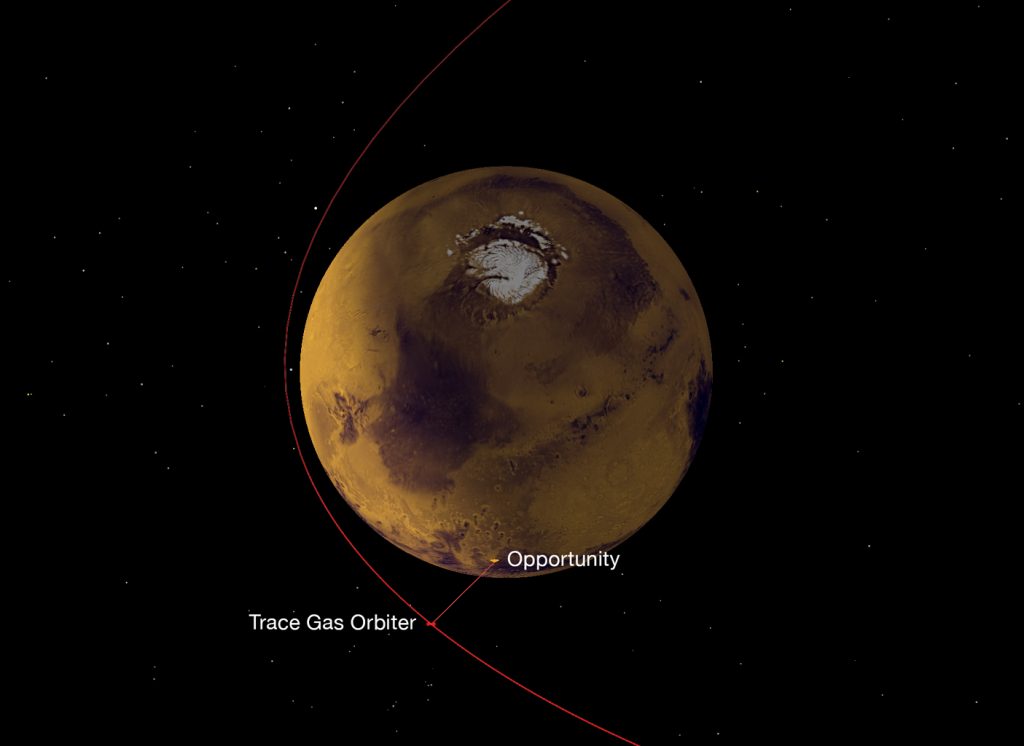 Here’s an extract from the NASA/JPL news article:

The transmissions from NASA rovers Opportunity and Curiosity, received by one of the twin Electra radios on the orbiter on Nov. 22, mark a strengthening of the international telecommunications network supporting Mars exploration. The orbiter’s main radio for communications with Earth subsequently relayed onward to Earth the data received by Electra. 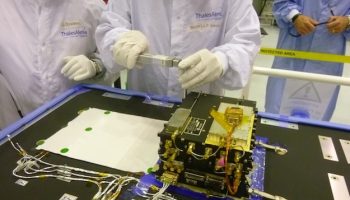 ESA’s ExoMars Trace Gas Orbiter (TGO) carries two Electra radios provided by NASA. This image shows a step in installation and testing of the first of the two radios, inside a clean room at Thales Alenia Space, in Cannes, France, in June 2014. Credit: NASA/JPL-Caltech/ESA/TAS

The European Space Agency’s (ESA’s) ExoMars/Trace Gas Orbiter reached Mars on Oct. 19, 2016. As planned, its initial orbit shape is highly elliptical, ranging from as far as 60,000 miles (98,000 kilometres) above the surface to less than 200 miles (less than 310 kilometres). Each loop takes 4.2 days to complete.

Frequent use of TGO’s relay capability to support Mars rover operations is planned to begin more than a year from now. That’s after the orbiter finishes adjusting its orbit to a near-circular path about 250 miles (400 kilometres) above Mars’ surface.

“The arrival of ESA’s Trace Gas Orbiter at Mars, with its NASA-provided Electra relay payload on board, represents a significant step forward in our Mars relay capabilities,” said Chad Edwards, manager of the Mars Relay Network Office within the Mars Exploration Program at NASA’s Jet Propulsion Laboratory, Pasadena, California. “In concert with our three existing NASA orbiters and ESA’s earlier Mars Express orbiter, we now have a truly international Mars relay network that will greatly increase the amount of data that future Mars landers and rovers can return from the surface of the Red Planet.”

The JPL-designed Electra radios include special features for relaying data from a rover or stationary lander to an orbiter passing overhead. Relay of information from Mars-surface craft to Mars orbiters, then from the Mars orbiters to Earth, enables receiving much more data from the surface missions than would be possible with a direct-to-Earth radio link from the rovers or landers.

“We already have almost 13 years’ experience using ESA’s Mars Express as an on-call backup for data relay from active Mars rovers, and TGO will greatly expand this to routine science-data relay,” said Michel Denis, TGO flight director at ESA’s European Space Operations Centre, Darmstadt, Germany. “In 2020, TGO will extend this relay support to ESA’s ExoMars rover and the Russian Surface Platform, an important capability together with its science mission that enhances the international data network at Mars.”

As an example of Electra capabilities, during a relay session between an Electra on the surface and one on an orbiter, the radios can maximize data volume by actively adjusting the data rate to be slower when the orbiter is near the horizon from the surface robot’s perspective, faster when it is overhead.

Here are some tech details on the successful test, contributed by the TGO mission team at ESOC. 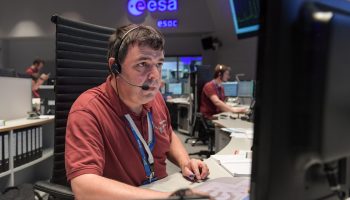 Scenes at ESA/ESOC, Darmstadt, Germany, on 19 October 2016 during the arrival of ExoMars. Credit: ESA/J. Mai

TGO’s Electra radio system was already put through some initial testing while the spacecraft was enroute to Mars, and was successfully used in the so-called ‘Open Loop’ recording mode to record signals from Schiaparelli during the test module’s separation from TGO and during Schiaparelli’s Entry, Descent and Landing on Mars on 19 October.

The purpose of the two tests performed on 22 November was to receive, for the first time, data transmitted from the NASA rovers on the surface of Mars.

Both tests enabled maintaining a continuous and uninterrupted rover-to-orbiter radio data link that can be used for future relay activities. The two overflights happened outside of real-time visibility from ground stations, and used TGO’s prime Electra unit (there is also a back-up unit on board).