The first Orion spacecraft that will fly around the Moon has finished assembly and testing at NASA’s Kennedy Space Center and is all set for its next part of the voyage on Earth. It is set to arrive next week at Mansfield Lahm Airport in Ohio, USA, after a flight on NASA’s ‘Super Guppy’ – one of the few aircraft that can carry the spacecraft that is as tall as a two-story house. 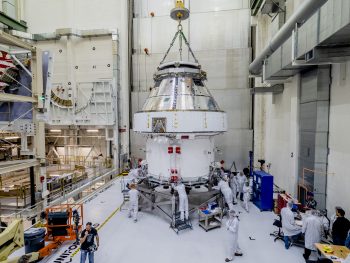 After lifting out of the cell, Orion was attached to a tool called a verticator that rotates the stack to a horizontal for easier transport to NASA’s Plum Brook Station in Sandusky, Ohio.

Orion was then ‘shrink-wrapped’ for its flight where it will be transported in a metallic structural framework, like a cage, with rings holding Orion to the Super Guppy cargo hold.

The European Service Module arrived at Kennedy Space Center one year ago for integration with the Crew Module. Many high-precision welds later the spacecraft became one unit and went down the production line to have its antenna’s installed, an initial power-on to check systems, pressure tests to ensure all the pipes were connected securely, tests to make sure the sun sensors work and acoustic tests to simulate the roar and vibrations it will experience during launch.

After its flight in the Super Guppy, Orion will continue its voyage by truck to arrive at Plum Brook for the next set of tests including vacuum and electromagnetic interference testing that are scheduled to start in December.

The tests will last until at least March 2020.