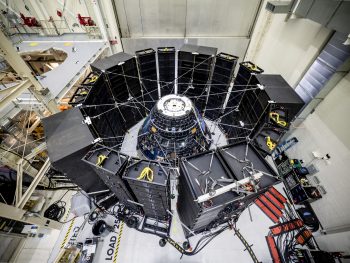 The four Solar Array Wings were connected to the European Service Module with the last installed May 10. The installation was followed by Direct-Field-Acoustic Testing (D-FAT) to simulate the extreme noises of a rocket launch. The European Service Module and Crew Adapter Module were surrounded by large speakers set at full blast to ensure the spacecraft survives the vibrations and loud noise generated from the Space Launch Systems rocket liftoff. After the D-FAT sound bombardment engineers will run a functional test to check the electronics are working correctly.

The Solar Array Wings will not stay attached to the spacecraft and are set for removal as soon the D-FAT tests are complete. It is easier to transport the spacecraft without the 7-m long solar wings attached.

From 13–14 May the water tank was checked for any leaks by adding pressure. The water tank will supply astronauts with drinkable water during their missions, pushed by metallic bellows made from stainless steel just  0.15 mm thick. 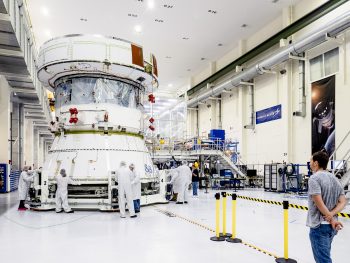 Moving the service module for testing. On 29 April Orion’s Service Module moved to the lift station inside the assembly bay for installation and fastening of systems in preparation for Direct Field Acoustics Test. The Service Module moved down to the east end of the bay where it will be surrounded with speakers and exposed to the acoustic level that will be experienced in space. Credits: NASA

These tests are leading up to a milestone in the Orion development: mating of the Service Module with the Crew Module. Slated for the July, connecting the two modules will show the complete spacecraft (minus solar array wings) for the first time. At 7.3 metres tall, the size of a two-story house, the complete picture will be a sight to see.