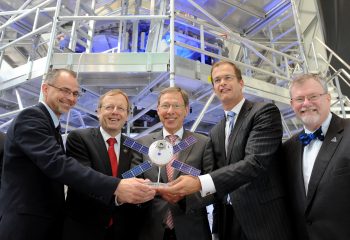 Over 20 000 parts and components in the European Service Module need to be assembled – from electrical equipment to rocket engines, solar arrays, propellant tanks and life-support as well as hundreds of meters of cables.

The first service module to go into space as part of the Orion spacecraft, the Flight Model or FM-1, will fly more than 64 000 km beyond the Moon and back. Thales Alenia Space Italy delivered the structure and assembly is underway at the site of Airbus Defence and Space (Airbus DS) in Bremen, Germany. 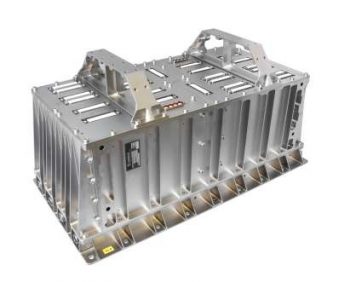 The European Service Module for Orion has a propulsion system to maintain its attitude control and boost. 33 thrusters have to be precisely controlled and monitored using data from more than one hundred pressure and temperature sensor signals. This will be done by the Propulsion Drive Electronic (PDE) which has been designed, developed and built by the Avionics Engineering and Design department of Airbus DS in Bremen. Each Service Module will be equipped by two PDE boxes for required redundancy and failure tolerance.

The PDE is based on ATV’s design and is connected to the Vehicle Management Controller located in the Orion capsule by a time-triggered Ethernet network.

The PDE’s software has been developed to the highest level of ESA standards, with the implementation of a Category A firmware to ensure extreme failure tolerance 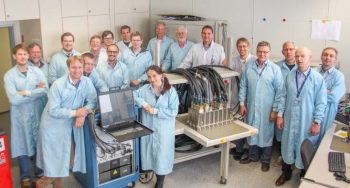 The first three PDE engineering models were delivered to the ESM- Qualification  Facility of Airbus DS in Les Mureaux, France. Each PDE includes dedicated electrical test equipment for checking its operation in the test and simulation environment in Les Mureaux.

In the next weeks and months the PDE’s will be part of extensive test sessions to assure the performance and qualification of the ESM design. The next step for the Airbus PDE team is to manufacture, test and qualify the PDE flight units to be used in the first flight model by end of this year.