Catching up with ATV

We’re approximately half-way through the ATV-3 mission, so it’s a good time to provide an update on what’s been happening with Edoardo Amaldi, and what’s planned in the next few months.

“ATV Edoardo Amaldi is fulfilling its mission in  an excellent manner — and is completing all tasks inherent to its mission to the ISS.”

Now, let’s look at the numbers. As of 20 June, ATV has performed the following ISS servicing activities:

(For details on bringing the ATV power chain back into full operation, scroll to bottom of this post.)

Massimo ended his note with: “Thanks to all of you for the contribution given to the ATV programme in general and Edoardo Amaldi in particular!“

18 June
ATV propellant transfer: ATV tanks and lines were prepared by mission controllers at ATV-CC in Toulouse for a scheduled propellant transfer set for 19 June.
Details via https://www.nasa.gov/directorates/heo/reports/iss_reports/2012/06182012.html 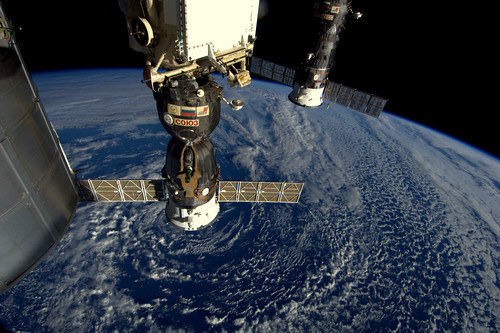 André’s Soyuz that will bring him home.

Note: As always, with an operational mission, these are subject to change:

With regards to the power anomaly, we have some good news from Massimo:

Editor’s note: On 30 March, the command path to one of four RICU units (part of the RECS system that also supports the ATV-to-ISS electrical interface) failed. Later, a second back-up RECS chain was successfully switched on to take over the lost command path and the ATV-to-ISS power bus connection was restored 31 March.
Details via https://blogs.esa.int/atv/2012/03/31/atv-3-on-board-power-anomaly/

A number of in-orbit measurements performed by the ISS crew on 4 June have confirmed that the POTOK equipment did not play any role in the 30 March RECS failure. Therefore, ATV does not need to be ‘electrically isolated’ any longer from the ISS when MCC Moscow activates Potok in the Russian Service Module. The primary RECS chain (that was switched off due to the failure) has been reintegrated on 5 June, thus restoring full redundancy of the ATV electrical connection to the ISS. Engineering investigations to understand what actually happened and why RECS experienced a failure in March are on-going with the active contribution of our Russian colleagues.