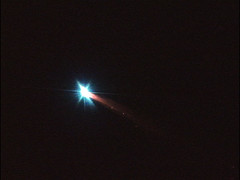 On 21 June, as ATV Johannes Kepler plunges through the upper atmosphere to the destructive end of its mission, a small ‘black box’ recording device will record a wealth of data that will help scientists better understand reentry dynamics.

The Reentry Breakup Recorder (REBR) has a mass of just 4 kg and, thanks to a protective 4.6-kg heat shield, is designed to survive the tremendous aerodynamic, frictional and other forces that will, ultimately, destroy ATV. The REBR will carefully record temperature, acceleration, rotational rate, GPS (location), and other data during the reentry.

“The REBR is designed to be released from the reentering host vehicle during the breakup process, to fly free and reach a subsonic, free-fall velocity at about 18 km altitude, from where it will make an Iridium satellite call to ‘phone home’ its recorded data before it, too, impacts the Earth. Recovery of the device is not required,” says ESA’s Charlotte Beskow, Deputy ATV Programme Head.

This will be the second flight for the tiny device; the first flew on Japan’s HTV cargo vessel, which reentered on 29 March. REBR 1 was hugely successful, not only recording a slew of reentry data but also surviving to splash down in the Pacific, where it floated and continued sending signals for several more hours. The data collected from the ATV’s REBR will be shared with NASA and ESA, and is expected help support future studies in a number of areas, including future space vehicle design, satellite reentry predictions and space debris. 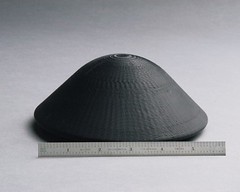 The REBR project team is headed by Dr Bill Ailor, Director of the Center for Orbital and Reentry Debris Studies at the California, USA, Aerospace Corporation, a research house that provides independent technical and scientific research, development, and advisory services to clients such as NASA. He kindly agreed to answer several questions via email.

Editor’s note: If all goes well, the team monitoring tonight’s REBR ‘mission’ expect to receive the first data signals from the still-falling device at around 21:00 UT (23:00 CEST) tonight. We’ll post an update here in the ATV blog as soon as we hear anything. Good luck and best wishes for a successful reentry to the entire team!

Q: Now that you’ve flown the first REBR on HTV, what are we learning from the data?
WA: While we did get good breakup information on [HTV], we don’t have enough data to show consistency in breakup altitude, etc., yet. We have learned that the overall REBR concept (i.e., a rugged device that will survive a reentry break-up event and protect and broadcast its data prior to impact) does work. That enables us to plan more-capable devices that can record fine details of a reentry breakup. These more capable devices might be prototype ‘black boxes’ for space transportation vehicles.

Q: What sort of data will you gather during the ATV2 reentry? Will this differ from HTV in March?
WA: We will collect the same data as we did for HTV2 – accelerations, roll, pitch, and yaw rates, temperature data in the heat shield, GPS data during the free-fall after breakup and pressure data inside the REBR.

Q: The REBR is a NASA payload on board ATV2, but ESA will get the data, too. Who else gets the data? How is it shared?
WA: The data is transmitted to Aerospace Corp. and we will do some initial processing and remove some temperature data that is proprietary to our heat shield manufacturer. Data will then be provided to ESA. Subsequent distribution will require approval of ESA and The Aerospace Corporation. We do plan to publish as much of the data as possible.

Q: Is this a ‘blue-sky’ research project? Are there practical benefits? Have you been contacted by any of the new space vehicle designers?
WA: This research project grew from a desire to make reentry breakup hazard prediction models as accurate as possible. Doing this requires data on reentry breakups that can only be collected during an actual reentry breakup event, hence, the Reentry Breakup Recorder (REBR). Over time, we hope to collect sufficient information that we can confidently design space hardware to be less hazardous to people and property when it reenters the atmosphere. Yes, we have been contacted by several entities interested in reentry breakup.

Q: How does the REBR make a telephone call all the way back up to an Iridium satellite? Doesn’t that require a lot of power?
WA: REBR uses a commercially available Iridium modem that connects to the Iridium satellite system to send its data. This same system can be used to make telephone calls from anywhere on Earth. Power requirements are less than 10 watts; our device only activates its transmitter for the final 5 minutes of flight, and we have plenty of battery power for that.

Q: What will you be doing during ATV2 reentry?
WA: REBR data is sent to us via the web, and we’ll be watching the data as it is received. REBR data is transmitted only after the host vehicle has broken apart during reentry, the REBR has been released, and the REBR has slowed to a subsonic velocity – which occurs at about 18 km altitude. So we’ll know that we have data before debris from ATV2 hits the water, but not immediately as ATV2 breaks apart.

Q: Overall, what are the benefits of having such data, whether from HTV, ATV or any other reentry?
WA: The data will enable us to predict more accurately what happens to space hardware when it reenters and comes apart due to heating and loads, and this will enable us to “design for demise” – or design hardware to come apart into less hazardous fragments when disposed of via reentry. The REBR system may also be a prototype for a black box system for space transportation systems and may also be used for testing new heat shield materials and sensors.

First REBR Reentry a Success
https://www.aero.org/news/newsitems/032911-REBRsuccess.html
The first Reentry Breakup Recorder (REBR), an instrument designed and constructed by engineers at The Aerospace Corporation, successfully recorded data as it plunged through the atmosphere on Tuesday night aboard the disintegrating Japanese HTV-2 spacecraft. The REBR then “phoned home” the data via the Iridium satellite system as it fell into the South Pacific Ocean Tuesday evening. “It performed beautifully,” said Dr. Bill Ailor, director of Aerospace’s Center for Orbital and Reentry Debris Studies and REBR development team leader. “The data we’ve gathered is absolutely unique and will shed new light on the phenomenon of how satellites and launch stages break apart on reentry.” Although it was not designed to survive impact with the water, the REBR did in fact remain intact and continued to transmit data for hours as it bobbed in the ocean between Chile and New Zealand. Analysis of the data will take six to eight weeks. The REBR is a small autonomous device that is designed to record temperature, acceleration, rotation rate, and other data as a spacecraft reenters Earth’s atmosphere. The Aerospace Corporation designed REBR to collect data during atmospheric reentries of space hardware in order to help understand breakup and increase the safety of such reentries. The REBR project was supported by the U.S. Air Force, NASA, and the Boeing Company. The first flight test of the small, autonomous device was coordinated by the Department of Defense’s Space Test Program. A second REBR will reenter the atmosphere aboard the European ATV2 vehicle in early June.

About Bill Ailor
https://swfound.org/about-us/our-advisory-committee/dr-bill-ailor
Dr. Bill Ailor is the director of the Center for Orbital and Reentry Debris Studies at The Aerospace Corporation, located in El Segundo, California. He has worked in the reentry breakup area for over 30 years, and received a NASA Group Achievement Award in 1992 for his work helping to understand the reentry breakup characteristics of the Space Shuttle External Tank. He was chair of the Reentry Subpanel of the Interagency Nuclear Safety Review Panel (INSRP) for the Galileo, Ulysses, Cassini, and Mars Explorer missions (INSRP provides independent assessments to the White House on the safety of space missions containing radioactive materials) and was Reentry Subject Matter Expert for the Mars Exploration Rover and Pluto New Horizons missions.

First spacecraft ‘black box’ survives re-entry
https://www.newscientist.com/blogs/onepercent/2011/03/spacecraft-blackbox-survives-r.html?DCMP=OTC-rss&nsref=online-news
The first black box flight recorder ever made for a spacecraft successfully survived a searing, incandescent re-entry from low Earth orbit on 30 March, according to its manufacturer, The Aerospace Corporation of El Segundo, California. Called the re-entry break-up recorder, the robust, heatproof device transmitted key data about its condition via satellite as it descended towards the Pacific Ocean between Chile and New Zealand. The recorder had been inside the deorbiting HTV2 – the uncrewed Japanese Space Agency cargo spacecraft which left the International Space Station last week – and was jettisoned by the fracture of frangible bolts as the HTV2 disintegrated.
Spacecraft reentry breakup recorder
https://patft.uspto.gov/netacgi/nph-Parser?Sect1=PTO2&Sect2=HITOFF&p=1&u=%2Fnetahtml%2FPTO%2Fsearch-bool.html&r=3&f=G&l=50&co1=AND&d=PTXT&s1=6,895,314&OS=6,895,314&RS=6,895,314
One or more small self-contained reentry breakup recorders are disposed within a spacecraft and each includes a sensor suite for collecting and recording collected and recorded sensory data during reentry breakup of the spacecraft, and includes a communications system for broadcasting the collected and recorded sensory data after breakup and before impact with the surface of the earth to a remote communication system for preserving the sensory data of the breakup as well as data relating to critical events occurring prior to breakup. An internal GPS receiver provides sensory positional data of the reentry and breakup positions.

‘Satellite Phone’ to Record Fiery Death of Japanese Robot Spaceship
https://www.space.com/11237-phone-japan-robot-spaceship-fiery-death.html
A Japanese robot space cargo ship is carrying a device to “phone home” during its planned death plunge into Earth’s atmosphere this week, but the equipment has a more important purpose than calling E.T. for help. The spacecraft, Japan’s unmanned cargo ship Kounotori 2, is due to intentionally burn up tomorrow (March 29 EDT) when it re-enters Earth’s atmosphere one day after leaving the International Space Station. In addition to the station trash packed on Kounotori 2, a high-tech sensor is ready to track the finer details of the spacecraft’s doom. In non-sizzle lingo, the Kounotori 2 is carrying a so-called Re-entry Breakup Recorder – or REBR for short – a small and autonomous sensors built to record temperature, acceleration, rotational rate and other data during Kounotori 2’s high dive into Earth’s atmosphere.
Japan’s HTV cargo freighter proves useful to the end
https://spaceflightnow.com/h2b/htv2/110329entry/
Japan’s HTV cargo craft plunged back to Earth overnight Tuesday with a unique sensor designed to record the heated death throes of the throwaway garbage-filled spaceship. The Re-entry Breakup Recorder, or REBR, was attached to the spacecraft for the ride back to Earth. While the HTV was designed to disintegrate once it hit the atmosphere, the REBR was protected by a heat shield to keep the device intact amid the violent re-entry.