Update on today’s rehearsal from ATV-CC

ESA’s Adam Williams, now sitting on console in the Mission Director’s chair at ATV-CC Toulouse, has sent in a detailed update on today’s rehearsal activities (we had mailed them some questions a bit earlier). Thanks, Adam, for taking time to reply!

Who is sitting on console today?
At ATV-CC, from the ESA Operations Management Team (OMT), Jean-Christophe Ronnet, Jean-Michel Bois and myself are on-console at various times during the day (and night!).

The Vehicle Engineering Team were also on-console during the early part of the rehearsal, for the transfer of the first on-board mission plan (OMP), which is used by ATV when it separates from Ariane. Also supporting the entire rehearsal in ATV-CC are the Ground Control Team, and several other OMT specialists are involved.

What sort of information will you monitor?
We monitor data provided by the Electrical Ground Support Equipment (EGSE) at Kourou, which is connected to ATV-2 by cable. We also check communication links with the international partners (NASA and Roscosmos).

ATV-CC during a launch simulation in January 2011 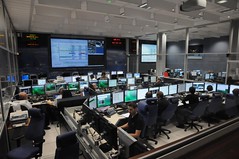 Anything special/critical about today’s rehearsal?
It is important that the rehearsal runs smoothly, and that we get confirmation that all our systems are working properly. Most importantly, by the end of the rehearsal we will know that we are ready for the launch next week.

How does it feel to be less than a week from lift-off?
It is exciting to be this close to launch. Not surprisingly, this is coupled with some nervousness, as we approach probably the most critical phase of the mission – getting into orbit!