The event will mark the spacecraft’s closest flyby of the moon in 2016, and, as a point of comparison, most of the other almost-60 Phobos flybys this year will occur between several hundred up to almost 2000 km. So it’s a real skimmer!

The flyby will enable Mars Express instruments, especially the HRSC – the High Resolution Stereo Camera – to see points of the moon’s surface that have not previously been observed from such a close range.

“This flyby will provide very good viewing, within 1,000 km, of an area previously not seen well,” Dmitri Titov, ESA’s Mars Express project scientist. “HRSC will be taking images; the MARSIS radar and the ASPERA-3 particle instrument will operate as well to sound the subsurface and plasma environment of the moon.”

The “+” in the predicted images (see above) indicates a possible landing site for the future Russian Phobos Grunt sample return mission.

“This flyby is important as it will allow us to finally view this area on Phobos that has yet to be seen at high resolution and excellent lighting,” says Thomas Duxbury, professor in planetary science at George Mason University, USA.

In the past, Mars Express has made closer flybys, but not by much. On 29 December 2013, Mars Express flew by at just 45 km, close enough that the moon’s gravity pulled the spacecraft slightly off its course, enabling new estimates of the Phobos mass and density. 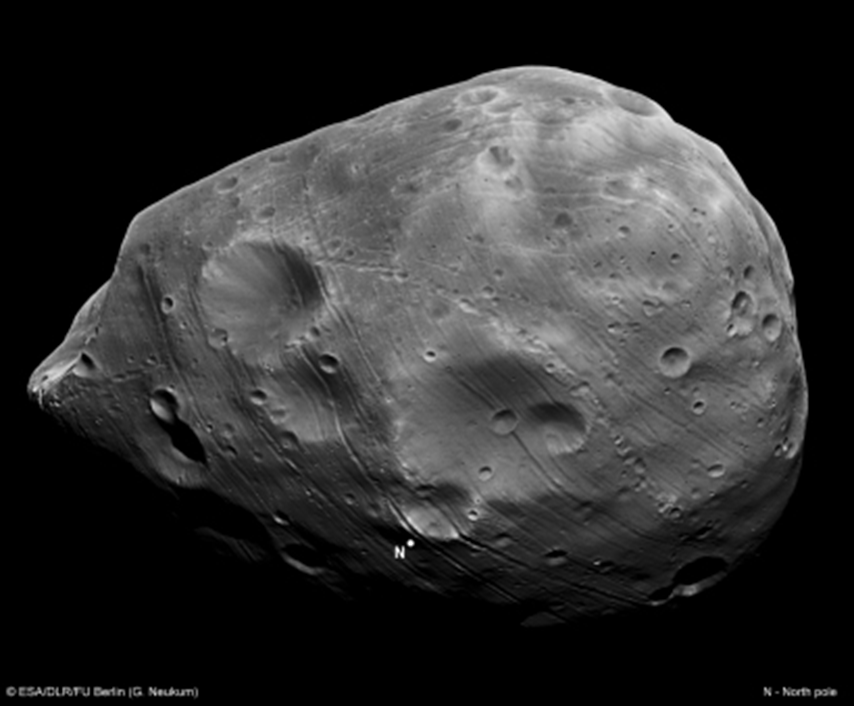 The flyby is an operational challenge as well as a scientific opportunity, as the positions of the moon and Mars Express must be known very, very precisely in order to safely make the ‘skim-by’.

Commands to trigger the instruments’ observations were uploaded  Thursday, 7 January, following last-minute optimisation of the expected position of Phobos relative to the spacecraft provided by the flight dynamics team at ESOC , Darmstadt.

“This is needed due to the high level of precision required to target Phobos with the instruments at such a close distance,” says Mars Express Spacecraft Operations Engineer Simon Wood.

“The activity will then take place fully automated and without intervention by the operations team at ESOC, who will be closely monitoring the flyby.”

Flybys such as this help generate evidence to understand how the moon was formed.

The low density of Phobos is consistent with the moon having a high porosity with an uneven mass distribution; in other words, it is essentially a rubble pile with large empty spaces between the rocky blocks that make up the moon’s interior.

This favours the formation scenario in which Phobos was born in orbit around Mars from a disc of debris and is not a captured asteroid – one of the other leading theories for how Phobos and its sibling Deimos came into existence.

The debris disc could have resulted from a large impact on the surface of Mars, or perhaps Phobos (and maybe Deimos) formed from left-over debris from the formation of Mars itself.

Data from such flybys will also prove valuable in planning future robotic or even human missions to land on the moon, and ideal location from which to observe Mars.

It is expected that the initial results from this flyby will be available in the coming weeks.

Editor’s comment: It is interesting to note that, because the polar orbit of Mars Express intersects the equatorial orbit of Phobos, at some point in the future – long after Mars Express has depleted its fuel and has been shut down – the spacecraft is likely to impact the moon.