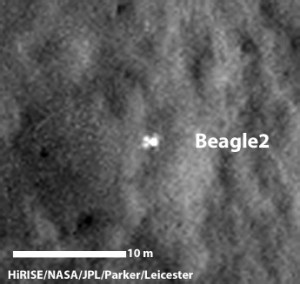 The UK-led Beagle-2 Mars lander, which hitched a ride on ESA’s Mars Express mission and was lost on Mars since 2003, has been found in images taken by NASA’s Mars Reconnaissance Orbiter. This close-up image has been sharpened to show possible details of the Beagle-2 lander on the surface of Mars.Credit: HiRISE/NASA/JPL/Parker/Leicester

The big news today is the discovery, courtesy of NASA’s Mars Reconnaissance Orbiter (MRO), of the UK-led Beagle 2 lander on the surface of Mars.

Beagle 2 was meant to parachute to the surface of Mars in December 2003, but after separation, the small craft was never heard from again.

In 2014, remains of Beagle 2 were spotted by the HiRise camera on board MRO; the images and full details are here.

We thought you might enjoy seeing some archive pics of Beagle, so we gathered a selection of images showing the craft on Earth, during launch and its last-ever view seen from Mars Express from space (by the VMC camera), just after separation on 19 Dec 2003.

The UK-led Beagle 2 was due to land on Mars on 25 December 2003. The spacecraft was ejected from Mars Express on 19 December 2003. Nothing had been heard from Beagle 2 and the mission was presumed lost. Until now.

It has now been announced that the Mars Lander has been identified partially deployed on the surface of Mars by images taken by the HiRISE camera on NASA’s Mars Reconnaissance Orbiter (MRO). These images show potential targets on the surface of Mars for the lander and key entry and descent components within the expected landing area.

Following analysis by members of the Beagle 2 team, which includes Leicester scientists, and NASA, the images show the Beagle 2 lander in what appears to be a partially deployed configuration with the main parachute and what is thought to be the rear cover close by.

Several interpretations of the image of the lander have been identified, consistent with the lander’s size and shape and changes in light reflections suggest that the object is metallic – again consistent with Beagle 2.