The first-ever reception of signal took place at ESA’s new 35m deep space station at Malargüe, Argentina, on 14 June. There’s still a lot of work to be done to have the station fully commissioned, but this is an excellent achievement and an important milestone – and the signal came from our very own Mars Express, orbiting the Red Planet some 193 million km away. 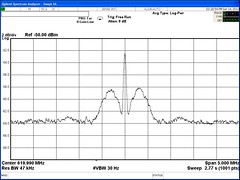 The signal in L-band is shown in the picture (at left). We measured a signal/noise ratio of about 56 dBHz, which matches the levels obtained by ESA’s existing 35m station at Cebreros during the same pass.

Pointing still needs to be optimised (pointing correction for our test was done manually); these tests are still ‘qualitative’. Some quantitative tests (less news-worthy but more useful to understand whether the station is operating within specs) are being done and look promising. Now, the teams on site are recalibrating the beam waveguide mirrors; we’ll have more tests in two weeks. But we need to calibrate the pointing first.

DSA-3 is set to enter regular service later this year.

You can see DSA-3 ‘live’ via our webcam: