We will be posting updates on today’s spacewalk below. All times are CET.

This second spacewalk in the AMS series will see Luca Parmitano and Drew Morgan exit the Station to complete four main stages: setup, preparing and accessing the worksite, tube cutting and clean-up.

12:00 The crew is starting to move Luca and Drew into the Quest airlock, where they will begin the process of depressurisation. Before they head out into space they “prebreathe” to purge their bodies of nitrogen. Luca and Drew have been breathing pure oxygen for two hours – their bodies will no longer have any nitrogen.

12:18 Ground teams give the GO for depressurisation. Inside the International Space Station the astronauts live in air at pressures similar to on Earth. Astronauts go through a depressurisation process before going into outer space – their spacesuits work at a third of the Space Station’s atmospheric pressure. 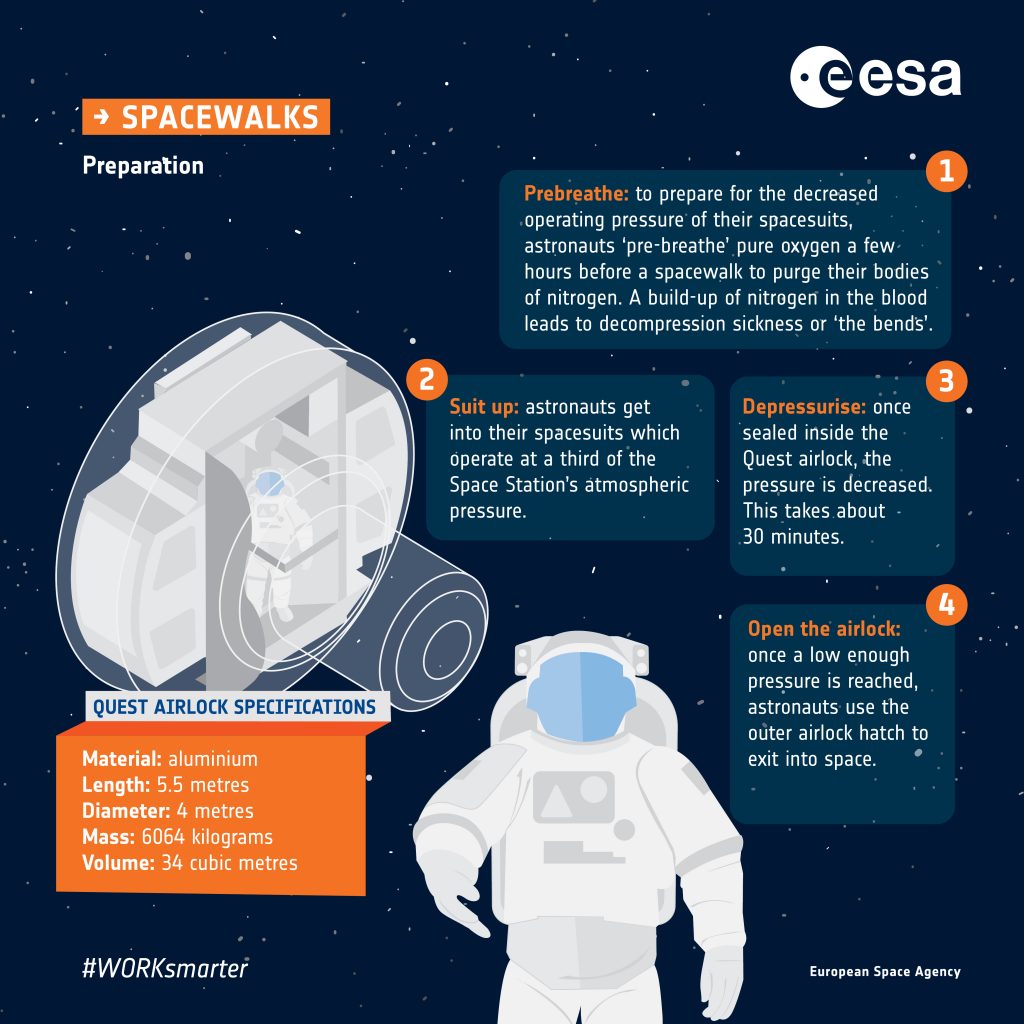 13:02 Switching to battery power for the suits/

13:15 Hatch is open with Luca exiting the Space Station first.

13:20 Luca reaches the Space Station’s robotic arm for his ride to the AMS-02.

15:00 Luca prepares for the next task: installing the Mechanical Attach Device (MAD).

15: 17 Using the pistol grip device to install the MAD. This will hold the upgraded thermal tracker pump system to be installed during the next spacewalk.

15:40 Repositioning to start the second task of the spacewalk – cutting the current CO2 line that has been cooling the AMS. Find out more about this action in this blog entry.

16:15 First depress cut complete. The old AMS cooling system has been permanently disabled in preparation for the new one. 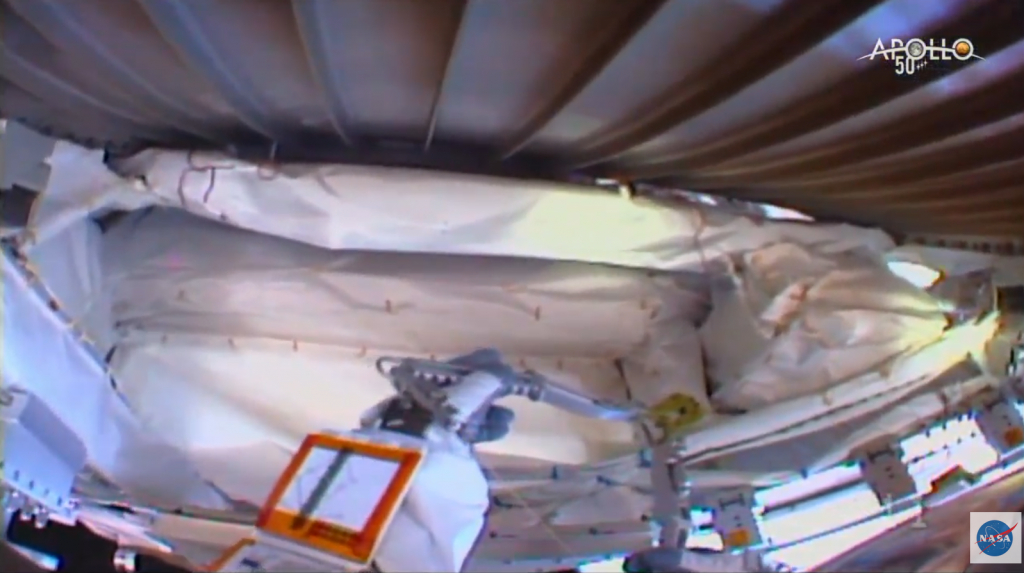 16:35 A second cut was needed to make the pressure drop quicker.

17:30 Luca and Drew clean up and prepare to move to the next area.

18:05 Luca arrives at the new work site and starts removing insulation to access the tubes. 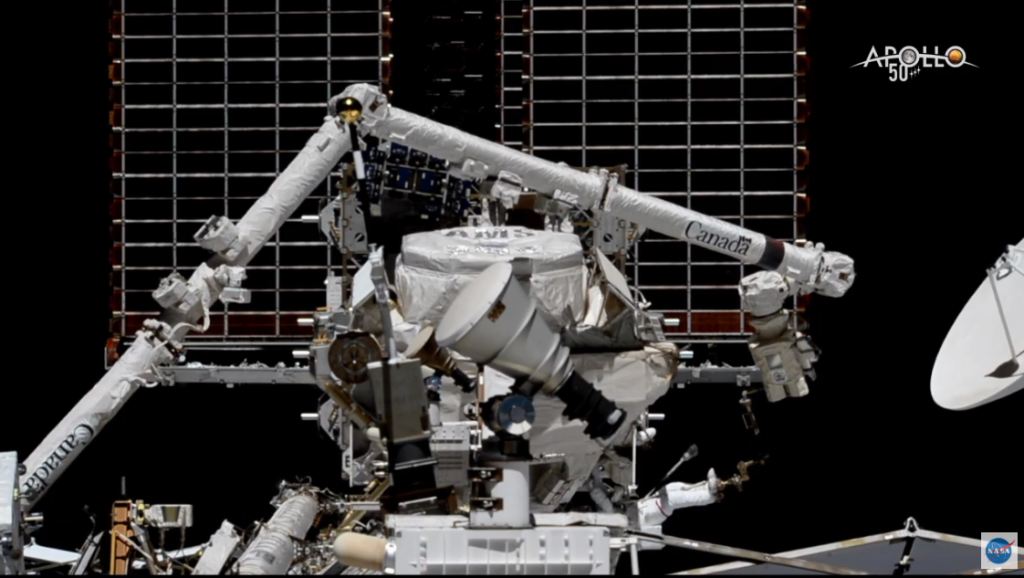 18:39 Mission control: “That wraps it up Luca. Take yourself home”. Luca and Drew complete capping the tubes and start to clean up.

19:10 Luca arrives back at the airlock on the robotic arm

19:29 Luca and Drew are inside the airlock and preparing to close the hatch.

19:36 After six hours and 33 minutes the spacewalk is officially over as the Quest airlock is repressurised.

20:00 The inner hatch of the Quest airlock is opened by Oleg and Christina.

20:18 Oleg and Christina start to remove the EMU spacesuits from Luca and Drew. 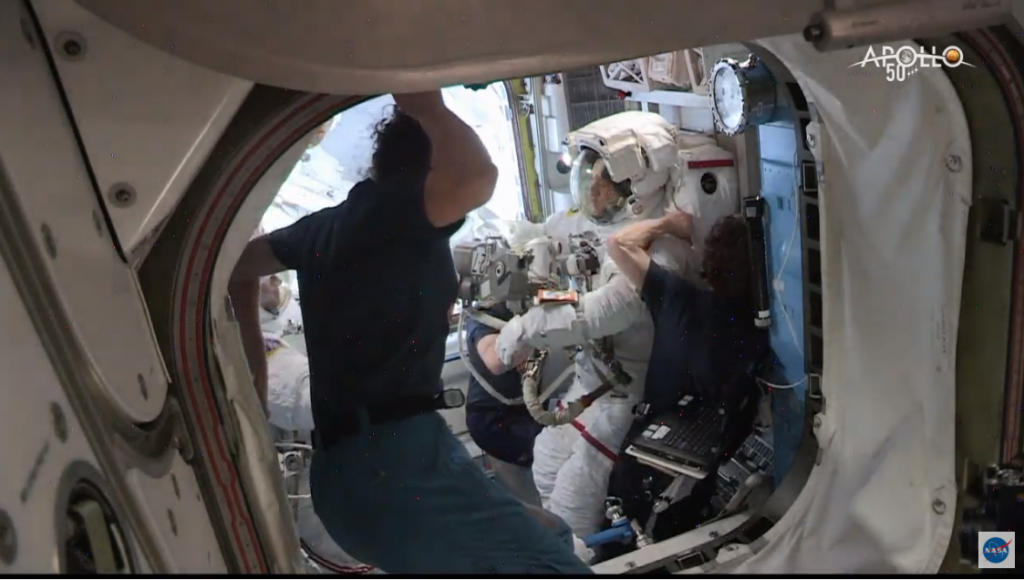 20:30 Coverage ends after a spacewalk completing all tasks. Next spacewalk for AMS-02 planned for 2 December 2019.