Drew and Luca by their spacesuits on the International Space Station. Credits: ESA/NASA

ESA astronaut Luca Parmitano and NASA astronaut Drew Morgan will exit the International Space Station on Friday 15 November on a spacewalk to service the anti-matter hunter AMS-02. A carefully planned and detailed affair, all spacewalks require coordination and lots of work from many people on ground. The four spacewalks for AMS-02 are exceptionally difficult as the bus-sized facility was never designed to be maintained in space.

The cooling pumps for AMS-02 are failing and without them it will no longer be able to collect data on the cosmic rays that are bombarding our planet. The first question spacewalk designers had to answer was “is it even possible?”

The six-hour spacewalk needs to be thought through in detail and is choreographed minutely. Every detail, down to the order in which tools and equipment are attached to the astronaut’s suits is worked-out in advance.

All spacewalks start with “prebreathing” for up to two hours. The pressure inside Luca and Drew’s so-called EMU suits is kept lower than the Space Station atmosphere which is pressurised at sea level – this is to make it easier to move the spacesuit, the lower the difference in pressure the less the astronauts will need to exert themselves. Similar to scuba divers, astronauts would suffer from the ‘bends’: quickly changing pressure can turn the nitrogen in human bodies into bubbles with serious symptoms. To avoid this, astronauts breathe pure oxygen to purge their bodies of nitrogen.

NASA astronauts Jessica Meir and Christina Koch will help the spacewalkers into their suits, which is an ordeal in itself in weightlessness. Once suited up the duo will enter the Quest airlock and  begin lowering the pressure. When they open the outside hatch, scheduled for 13:10 CET (12:10 GMT), their spacewalk will officially begin.

Once out of the airlock the first task is to do a ‘buddy-check’ to ensure all equipment is as it should be and to orient themselves in this new environment. The astronauts must always be tethered to specific Space Station supports, much like rock climbers or cave explorers.

They frequently check their suits and especially their gloves that are the most fragile and come into contact with the most objects. Even a small hole in a pressurised spacesuit in space is not a good idea. This is of special concern for the AMS spacewalks as the facility was not designed for in-orbit maintenance so has small and potentially sharp edges.

Luca strapped to the end of the Station’s robotic arm during his spacewalk in July 2013. Credits: ESA/NASA

Luca and Drew will separate and find their own way to AMS. Luca will attach himself to the 16-m long robotic arm Canadarm while Drew will ferry handrails and equipment to AMS by hand – literally using his hands to move along the Space Station’s exterior.

Luca will install foot restraints to slip into and then wait for Jessica to operate the arm from inside to move him over the Space Station for a wild ride to the AMS-02. 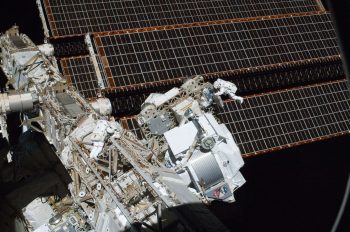 Newly installed AMS-02 in May 2011 with spacewalkers. The debris shield that Luca will remove is visible bottom-right with AMS logo. Credits: NASA

Getting Luca to AMS will take over an hour, when he arrives Luca will start removing the debris shield on AMS that protects the facility from any micro-meteorites that might hit it. Removing the shield will take roughly three hours and is the main task for this spacewalk. As Luca works, Drew will make multiple trips back and forth from the airlock with tools and equipment.

Luca will install a hand-rail to help hang on to the shield before removing about over a dozen fasteners to release the debris shield. Great care must be taken to avoid losing the fasteners. At orbital speeds of 28 800 km/h even small flecks of paint can cause major damage to a spacecraft.

Drew will install a foot restraint near the AMS so he too will have his hands free to take the debris shield once it is removed. Drew has the honour of literally throwing the debris shield away in a controlled manner for it to slowly lose altitude and burn up harmlessly in our atmosphere. Returning the large debris shield inside the Space Station is not practical.

Roughly four hours after the start of the spacewalk the duo will install three more handrails for better access in the next series of spacewalks.

At around the five-hour mark the spacewalkers will start cleaning up and return to the airlock, expected to be around 19:30 CET (18:30 GMT). 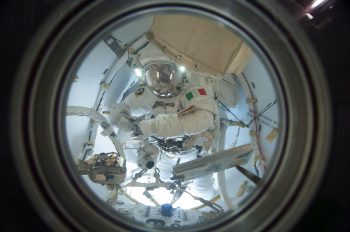 Luca in the Quest airlock during 2013 spacewalk. Credits: ESA/NASA

All these operations will take around six hours. For all this time there will be no food and no toilet break. Water is supplied in a pouch with a drinking straw. The work is tiring as the astronauts fight against the pressurised suit that becomes stiff in the vacuum of space. A spacewalk is a test of patience and alertness.

Throughout the spacewalk they will check their suit and especially their gloves for wear and tear. Every 90 minutes the Space Station orbits Earth so Luca and Drew will be continuously working around half the time daylight the other half in complete darkness. The spacesuits have lights for the dark moments, but as the Sun rises it can be blinding for a few seconds.

Jessica and Christina will be waiting to welcome them and help them out of their suits.

Live coverage starts at 12:50 CET (11:50 GMT). The spacewalkers can be recognised by a red stripe on the suit. Luca will be “extravehicular crew member 1” or EV1 wearing a suit with red stripes while Drew will be EV2 in an all-white spacesuit. Follow the spacewalk on Twitter from @esaspaceflight.