Guide to the International Space Station for the occasional visitor

Last week I spoke to students from three universities in Italy, Germany and Israel. I liked their questions a lot because they allowed me to be playful in my answers, I tried to get them to leave with more questions that their young minds can investigate further.

One deceptively simple question came from a girl who asked me: “What impresses you most about the Space Station?”. She was not referring to my mission, nor to my view of Earth that over the past 150 or so days has reshaped my mind’s geography but she asked about the Station itself. I had never asked myself this question because an orbiting space station is such an extraordinary concept that I find the idea alone impressive. But this was not the right time for me to beat about the bush and, in a few short moments that felt like a long time, I pictured the Space Station and asked myself the same question. What sprang to mind were the moments after opening the hatch of the Soyuz TMA-09M as I entered human’s frontier in the cosmos for the first time. Among the thousands of thoughts that crowded my mind nearly six months ago, one thought in particular stood out and I replied: “Its dimensions …”. Today I would like to welcome you on board the station, and take you through its modules, starting from its tail end…

Quiet and dark, Albert Einstein is a awaiting to depart. To light the spacecraft, you send a command through a computer that controls the on-board systems – in this case with the Russian ones. The four fluorescent lamps, identical to those on the American, European and Japanese segments, give out a very dim light when first turned on before they start gaining power and emit enough light to move freely. We are inside a closed cylinder with a curved surface. Outside the pressurised volume in which we find ourselves lie the spacecraft’s systems along with the pressurised liquids and gas. Beyond those you will find ATV Albert Einstein’s engines. On either side are two valve systems that let water, air and oxygen into the Station. Two racks bays on each wall surround us, above (overhead), under (deck), left (port) and right (starboard), eight in total. The racks are container shelves on which we have placed an enormous amount of waste, practically equal, in volume and weight, to the supplies ATV-4 brought us four months ago. In front of us a cone-shape narrows into the docking system, which  ingeniously doubles as the access hatch to the Russian segment. When we leave the module, we close the hatch for the last time: tomorrow ATV-4 will undock from the Station but we will see Albert one more time from above when it disintegrates as it re-enters the atmosphere. 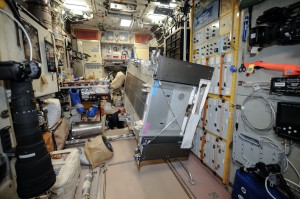 Once through the narrow ATV hatch we find ourselves in a small compartment shaped like a sphere and filled with containers. We use this area as a closet, but is mainly a corridor to access the Zvezda’s operating compartment (Zvezda means star in Russian). This is the central module of the Russian segment where Russian cosmonauts spend most part of their days in orbit.

Immediately to our left is a small compartment: the bathroom. A suction fan that creates an air flow to direct waste away. Solid waste goes to an airtight container, liquid waste goes through a separate tube similar to a vacuum cleaner for recycling separately. The space is really cramped, but the system works well and does not generate unpleasant odours, the space is simple but functional. Moving towards the bow of the Space Station, still inside the Service Module, we find two crew quarters left and right where Fyodor and Sergey sleep. The size of the crew quarters are no bigger than a phone booth. They are similar to those in Node2 where the rest of the crew sleeps, but they have a feature that makes them particularly luxurious: a window to the outside!

The lining of the walls, an opaque cream colour carpet, allows you to fix  anything  directly onto them thanks to the ubiquitous Velcro. There are only very few panels on the station that are not covered by Velcro. 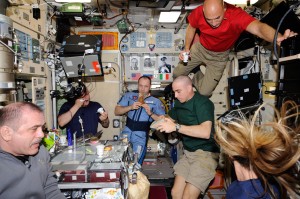 Continuing our journey forward a folding table can be seen where generations of space explorers have dined together. The table includes an element to warm up meals. On the right there is the water dispenser that delivers water hot and at room temperature. On the left there is another water dispenser for long-duration stays . Next to the table, towards the Station’s bow, you will find the system to regenerate our atmosphere. This large apparatus is constantly in motion with the sound of the a clock pendulum in motion. Moving on  the space narrows on both sides and we find our cameras and lenses, sorted by focal length from wide-angle to 600mm zoom. The deck in this area contains a number of windows  with excellent optical properties. To watch the planet go past underneath us is an endless source of entertainment. Two computers with access to the onboard analogue system are located on the sides of the central panel. There are three computers: one to access the Russian systems, one for the American systems  and  one for the onboard network. The ATV control panel,  through which I followed the spacecraft’s docking and I will monitor its undocking, is installed on the right side. Usually TORU, the manual command system for Progress,  is here as well.

We go through another hatch to get into another round compartment , larger and more comfortable than the previous one. This compartment is different from the first one because it is  a node with three docking points to which three modules are docked. 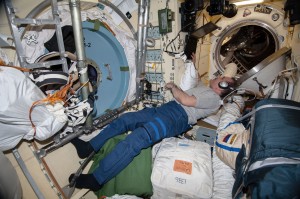 As we float towards the zenith, we enter the Mini Research Module 2. With its elongated bell shape, this module is used as a docking port for logistics modules and for the of Soyuz A line (used for Expeditions with uneven numbers for example now the Expedition 37/38 Soyuz is here). The walls are covered with the same cream-colour carpet but they are newer here and the colour is more vivid. This module has two hatches on the outside, one positioned towards the direction of flight, the other in the opposite direction . Each door has an integrated window. At the zenith we find the Soyuz spacecraft, dark and silent, apart from the never-ending sound of the fans. If we settle  into the Soyuz’ descent module we are at the highest point of the Station: there is no human presence above us. 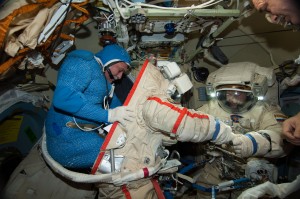 Going in the opposite direction, towards the nadir, we enter the Docking Compartment1. This compartment, identical to the MRM2, is used as a docking port for the Russian Progress cargo vehicle and as an airlock for Russian spacewalks. The two Orlan spacesuits always stowed here and Oleg and Sergey the activation procedures for the two suits some time ago. At the lowest point we can see the Progress shuttle that docked to the Station a few months ago and since emptied. The spacecraft is gradually being filled with waste until it departs. 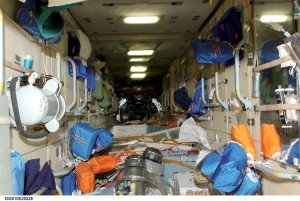 Zarya which means dawn in Russian is the oldest Station module, launched in 1998. Although it holds various systems used during autonomous flight, it is now used for storage. The walls are panels that can be easily opened to access the equipment in storage. Crossing towards the front of the Station, the deck is completely covered by cargo , secured by elastic cords and Velcro. The cargo covers about a third of the walls. If I stretched out straight, the material would come up to my knees. At the front, the module is completely empty: here Fyodor, Oleg and Sergey wash in the morning and after exercise, and three of the walls are covered by their personal items. The best way to quickly cross this module is to use the bars on the walls: they almost look like horizontal boxes. Sometimes coming from the Service Module I have fun crossing FGB with my feet forward , forcing my brain to think vertically:  the feeling is similar to descending into a well.

At the very front we go through another hatch and find ourselves in another rounded compartment, as large as the one on the other end  but with two docking points . 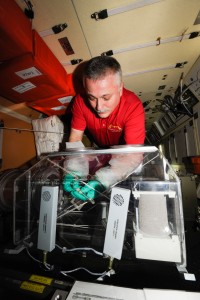 Descending towards the nadir we enter the Mini Research Module 1. It is bigger than Mini Research Module 2 and the Docking Compartment 1. The interior has a square cross-section, and just like the FGB the walls are covered with panels that can be opened to access the equipment stored behind them. The lowest part of the module holds the docking port for the Soyuz line B for Expeditions that start with an even number such as 36/37. My Soyuz is docked there at a 45 degree angle compared to the direction of flight. But not for long in preparation for the arrival of TMA-11M, my crew will undock from Mini Research Module 1, fly around the International Space Station to reposition the vehicle behind the Service Module, and then dock in manual mode. This manoeuvre is rarely done but I am trained for it together with Fyodor and we are pleased to be able to perform it.

END OF PART ONE