@Astro_Luca and the space robots 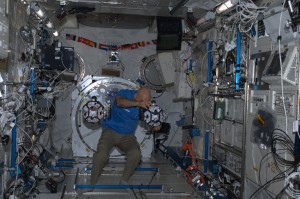 As I prepare to run a new experiment on the Space Station I cannot not help but think, once again, of the movie Star Wars. In one famous scene the young Luke Skywalker is trained to use his powers with a small, cute droid. As it floats in front of him the droid forces Luke to react quickly with his lightsaber to avoid being hit by laser fire.

The same scene must have impressed a professor at the MIT in Boston, USA, as he asked his students to develop the same little robot. Today I am going to work with two of these three droids we have on the Space Station as part of an experiment called SPHERES. The testing program includes a series of experiments in which the red droid (without excessively straining my imagination I have called it Red) will perform a series of manoeuvres around the other, blue-coloured droid (I have called this one Blue!). Red will receive the flight plan through a smartphone that is connected to its electronic brain and my job is to prepare the workspace, send the commands through an interface on a computer and monitor the execution of its flight plan to intervene if necessary. The interface is intuitive and vaguely familiar because it is similar to what I used on K10, the little exploratory rover that is part of another experiment.

The two droids are as big as a football and shaped like a polyhedron that Leonardo da Vinci would have liked. They use high-pressure carbon dioxide for their small engines with a series of nozzles that are placed so they can move in three dimensions. Their operation space is limited by five antennas that communicate with the robot’s sensors.

A first test is used to check the engines. The rhythmic “click-click ” caused by the opening and closing of the valves will become a very familiar sound during the next few hours of testing.

I position the two robots at the centre of the area that has been assigned to them, trying as much as possible to set them perfectly still. When I give the go-ahead to start the flight plan, Blue moves to the centre of its airspace, while Red waits with robotic, infinite patience until its partner is ready. As soon as Blue is in position (it is amazing to watch the droid stay absolutely still in an environment where everything is in constant motion), Red starts to work performing the flight plan. Red orbits its companion following a series of navigation points in three-dimensional space. Its trajectory is visible through the interface and, in real-time, I also see the relative positions of the two droids: the smartphone’s camera allows me to see what Red sees while performing its inspection. Red completes the manoeuvre perfectly and the ground-team following the experiment gives me the OK to go ahead with the rest of the experiment. Over the next 90 minutes Red follows increasingly complex three-dimensional paths around its companion with me intervening only sporadically when the flight plan is not correctly observed by the robots. 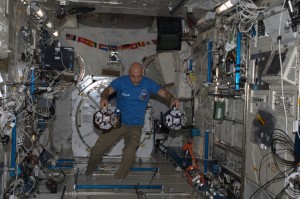 But Red and Blue will not be used to train Luke (or Luca unfortunately). The idea of ​​being able to control robots in space may sound simple (and it is), but when it comes to controlling several coordinated robots the problem is increased exponentially. In today’s case Blue remained perfectly still in the middle of its assigned space, so Red’s trajectory was free of obstacles. But if Blue had failed by only a few millimetres Red would have crashed against the Space Station walls. This is not a problem during an experiment but in an operational environment such risk is unacceptable.

This type of experiment is needed to understand how we can use of robots to perform tasks instead of human beings. A robot that can move independently is highly beneficial for future exploration, from inspections of spaceships to analysing atmospheres. The advantage of using a swarm of small robots is that they could work together to replace a large robot. It is difficult to bring large and heavy objects into orbit but small droids could be transported in otherwise unusable space and travel at very low cost. One could even think of launching the pieces of a spacecraft together with small robots who would assemble spacecraft independently!

Sounds like science fiction, but little more than a hundred years ago so was flying. It may seem very futuristic – but the first day of the future is tomorrow.