Scenes from life in space 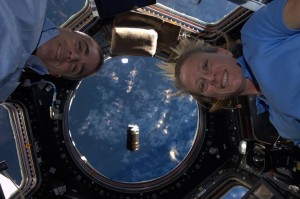 Today Karen and Chris have been busy all morning, first with monitoring the approach of HTV-Kounotori 4 – the “White Stork” that brings us Japanese supplies, experiments and materials – then with its capture, performed with grace and skill by Karen.

As I wrote upon the arrival of ATV-4, the arrival of a cargo vehicle is always exciting. Unlike the cargo ships that automatically dock to the Russian segment, those of the American segment are ‘captured’ by the Canadarm2, which is controlled by an operator. So far, the Japanese freight vehicles have been very stable but the capture operation is still extremely delicate and many hours of training are devoted to resolving potentially disastrous situations. Another difference is that the approach can be followed live from Cupola, which is also where we control the capture from. It is an event with its own particular beauty, which I would describe as ‘elegantly technological’. Kounotori shines as the sunlight reflects on its golden surfaces: it doesn’t have ‘wings’ like ATV but it is a similar size and while it slowly approaches, I can’t help but stand and watch in amazement at this giant machine that moves in such a well-controlled and precise manner. I watch the arrhythmic jets of gas fire from the engine nozzles and HTV begins to rotate to align itself for the docking manoeuver, now just a few meters away from the robotic arm that is ready and waiting. This silent choreography, despite its simplicity, is thrilling. 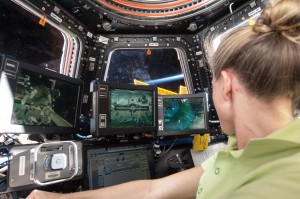 Looking at the monitor, HTV appears perfectly still through the camera mounted on Canadarm2. Karen receives authorization to capture, begins the approach and asks Chris to set the ‘free drift’ command for HTV: from now on, any rotation or movement will no longer be corrected by the engines.

For 99 long seconds Karen deftly guides the robotic arm and once in position, she presses the ‘trigger’ that activates the mechanical system linking the cargo ship’s interface to Canadarm2. Everything happens with precision and the silence is broken only by the communication time and distance punctuated by Chris and Karen’s answers. Chris reads the parameters and calmly confirms the capture of HTV4: the stork has reached its destination and is ready to deliver its ‘bundle’.

Yesterday the ground controllers ‘hooked’ HTV4 up to the station and now it’s down to me and Karen to do the work needed to open the hatch. The process of equalization and reconfiguration is long and complex and it takes us the entire morning to complete it. But when ground control switch the lights on and we get our first glimpse of the immaculate interior of the cargo vehicle through the hatch, an inevitable smile lights up Karen’s face and I’m sure a similar one is printed on my face too. Next, it’s time to open the hatch: I feel really honoured when Chris and Karen tell me to go ahead – a little gift for the ‘younger brother’. Equipped with personal protective gear (mask and goggles, just in case there’s any dust in the HTV’s atmosphere) I execute the procedure: I open the door and lower myself inside the pressurized module. The portable analyser confirms that there are no contaminants in the atmosphere: the rest of the crew can safely enter.

In the afternoon Chris is tasked with starting to open HTV’s cargo. The ‘choreography’ sent to us from the ground details the exact order for opening each container and where the material should be put in the Station. But the first container is special: it contains gifts from our families – all in just a few cubic centimetres but full of the memories, flavours, colours and smells of our planet. 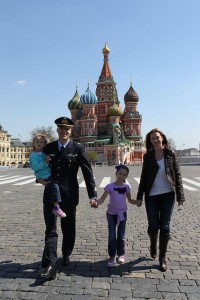 With the same quivering anticipation of a child who is about to open the biggest present on his birthday, one by one I open the packages that my wife Kathy has carefully prepared. With a smile that just keeps growing, I find individual packs of green chilli, a speciality of New Mexico that makes even the blandest meals tasty. Kathy has shipped them in industrial quantities, and there will be enough for everyone, both for this expedition and for the next! Then there are a few cans of a popular hazelnut paste – I don’t normally have a sweet tooth but this very Italian speciality tastes of my childhood, and I’m already thinking about my future breakfasts… Then I find some books that I recognize immediately because I’ve read them dozens of times: full of colours and imagination, I’ve told these stories time and again to my daughters when they were tucked up in bed, my voice keeping them company as they drifted off to sleep.

But, as always, it is the last parcel that instantly whisks me away from this ship and transports me back to Earth in a flurry of emotions that almost overwhelms me, bringing tears to my eyes. Folded inside a simple plastic bag are some colourful pieces of cloth: two squares as big as handkerchiefs, cut from my daughters’ blankets. They are soft and fragrant; I hold them up to my face and lose myself in the sweet, unique, unmistakable scent of my daughters. I can almost feel the warmth of their embrace and I let myself be wrapped up in the tenderness felt by a father through the love of his daughters.