A stroll into space 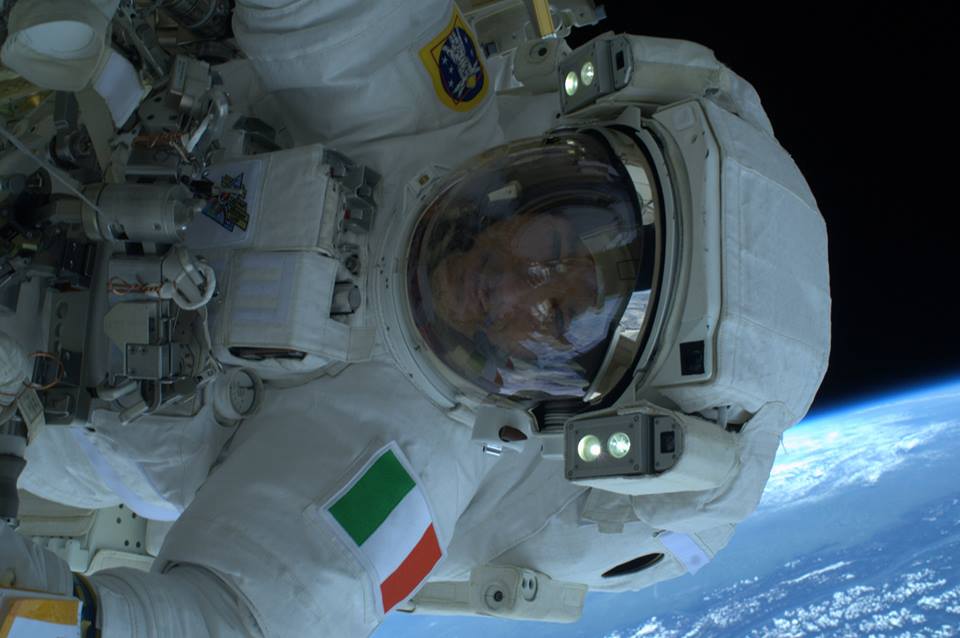 The airlock is dark and silent as a temple, perhaps one dedicated to technology. As I enter, it has the calming effect of a prayer.

It’s still early but I’ve already been up and about for an hour. After shaving more carefully than usual (I don’t want to have any cuts on my head or face), I have a particularly big breakfast – there’ll be no lunch today. Then I turn to Chris, and he must have been able to read the question on my face, because he answers even before I have time to speak: “Yes, let’s do this”. In other words, it’s time. 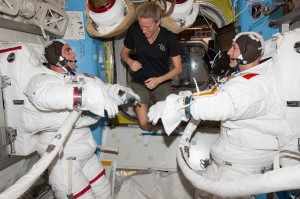 The first step towards an EVA is a very long series of procedures, all designed to keep us safe. After putting on a sub combination (a sort of underwear that covers us from the neck to the ankles) and the LCVG undergarment (Liquid Cooling and Ventilation Garment), we breathe pure oxygen for about 40 minutes to remove nitrogen from our bodies. Meanwhile, the team on the ground takes us through a series of checks on our EMU (Extravehicular Mobility Unit) suits.  We carry out these out meticulously; even though I have followed these choreographed steps so many times on the ground during simulations, now it’s for real and I will soon depend on this cumbersome suit to survive outside the Station. In space. This is such an incredible idea that my brain doesn’t stop to dwell on it, and instead I focus on the activities underway. Time goes by in a flash, and suddenly it’s time for one last snack before we put on the suits. For around 9 hours, I won’t be able to eat anything. All I’ll have is a plastic straw that will allow me to drink while I’m outside.

Putting on the space-suit requires considerable physical effort, especially for the top part. The torso section is stiff and tight, especially for me because I chose a smaller size in order to be more agile. And I will be more agile but the price I pay is having to contort my arms and shoulders while pushing with my feet as hard as I can, until my head fits through the metal collar and my hands pass through the wristbands of the suit. 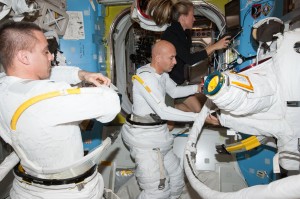 Karen and Chris attach the lower part of my space-suit (the “trousers”) and then it’s Chris’s turn to make a similar effort to get into his suit. As carefully as she can, Karen locks the helmets onto both suits and blocks them, sealing us inside. Then we’re on to the second stage: the desaturation procedure, during which time the suits are flooded with oxygen and the airlock is brought to a pressure of 10.2 psi. While this is happening, Chris and I go over the procedures that we will follow for the umpteenth time, focusing on every aspect of the exit, every movement and every detail of what we are about to perform. The checks continue as planned and the suits are in perfect working order. This is confirmed by Houston, who are following everything via telemetry, even our biomedical data.

Fyodor arrives to help Karen to install our equipment and to help us enter the sealed chamber itself. This area, slightly larger than the two suits we are wearing, must accommodate not only us but also all the tools to be used for maintenance work and instruments that need replacing. I turn on the pump to depressurize the environment to 2 psi; Karen then opens a valve to vent the rest of the atmosphere. I seem to be aware of everything going on around me and it feels as though I’m watching everything in slow motion. Suddenly, I realize that the cacophonous metal din coming from our floating tools has vanished. Sound isn’t travelling anymore and even before Chris tells me, I know that depressurization is complete: we are out in space. 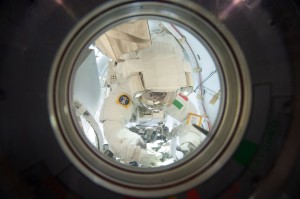 With his characteristic calm, Chris opens the hatch and I have my first view of Earth rolling beneath my eyes. My visor is the only thing both separating me and protecting me from the blazing light. The crystal blue is hypnotic, but there is no time to stop. Chris is ready to exit and he’s out in a few seconds. It’s my turn now. With rehearsed and methodical composure, I perform every movement like a dancer follows his choreography, but I’m not looking for the final applause – I just want to be sure I don’t make any mistakes. When Chris tells me, “OK, you’re out!”, I know he has a smile on his lips, even though I cannot see him because we both have our gold visors down. It’s daylight, and the light is so pure and bright that it hurts.

Suddenly, Chris is gone, and I close the insulating cover that protects the inside of the airlock. Houston tells me that I can take all the time that time I want to adapt, but I have other plans: I’ve already decided that I’ll adapt while I move to my destination: ELC2. And as soon as I start to move, I realize that I’ll have no problems: I feel fine, relaxed – in my element in an environment which should feel totally alien to me. Instead it feels almost familiar. Hundreds of hours underwater have had the desired effect. As I move, I see North America pass under me, tinged with the light of sunset.  I feel so good I can’t stop myself from smiling. But my smile doesn’t last long. When I get to my planned location to anchor the first of the two self-reeling cables that secure me to the Station, my eyes start burning as if I had rubbed them with soap and they become very watery. At first, I don’t understand what’s going on: tears are pouring out of my eyes and it stings so much that I can’t keep them open. I decide to stabilize myself for a moment to think. I shake my head from side to side – in orbit tears don’t roll down your cheeks, they just accumulate on your eyes. Then I understand what is happening: during our preparations, we cleaned the inner part of the visor with an antifogging agent. Because of the low pressure, the product had evaporated and it must have gone into my eyes, irritating them. I know that the effect will last a couple of hours and that there’s nothing I can do. I resign myself to the burning sensation and I have to shake my head time and again to make the tears stop. 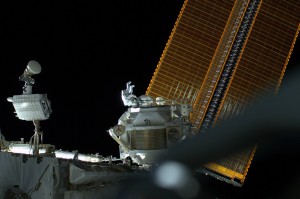 Following the route I studied so many times, I find myself at ELC2, the platform for experiments and equipment installed on the trellis on the right: a huge structure located on the side facing black space. It’s already dark and as I climb I am conscious that at this very moment, I am the furthest man from the surface of the Earth, especially when I find myself “upside down” to take pictures of the two experiments that I have come to collect: ORMATE and PEC – two platforms of materials exposed to the void.

To remove them, I have to use my pressurized gloves with the utmost dexterity. Each time I bend my fingers it’s like squeezing a tennis ball, and I’m very careful not to wear my hands out. Opening one eye at a time – they are still watery – I manage to dismantle the two platforms and place them on my space-suit to bring them back inside. Shane, our radio contact from the ground, tells us that we are 20 minutes ahead of schedule and this gives me a lot of confidence while hooking the two experiments inside the airlock and taking the tools I need for the next task, which is to install the APFR (Adjustable Portable Foot Restraint) on the Canadarm2. Installing the APFR and ingressing into it goes smoothly but even so, before I give Karen the OK – she is at the commands of the robotic arm – to move away from the structure, I ask Chris to confirm that my feet are properly fastened to the platform: they are the only thing keeping me attached to the Canadarm! 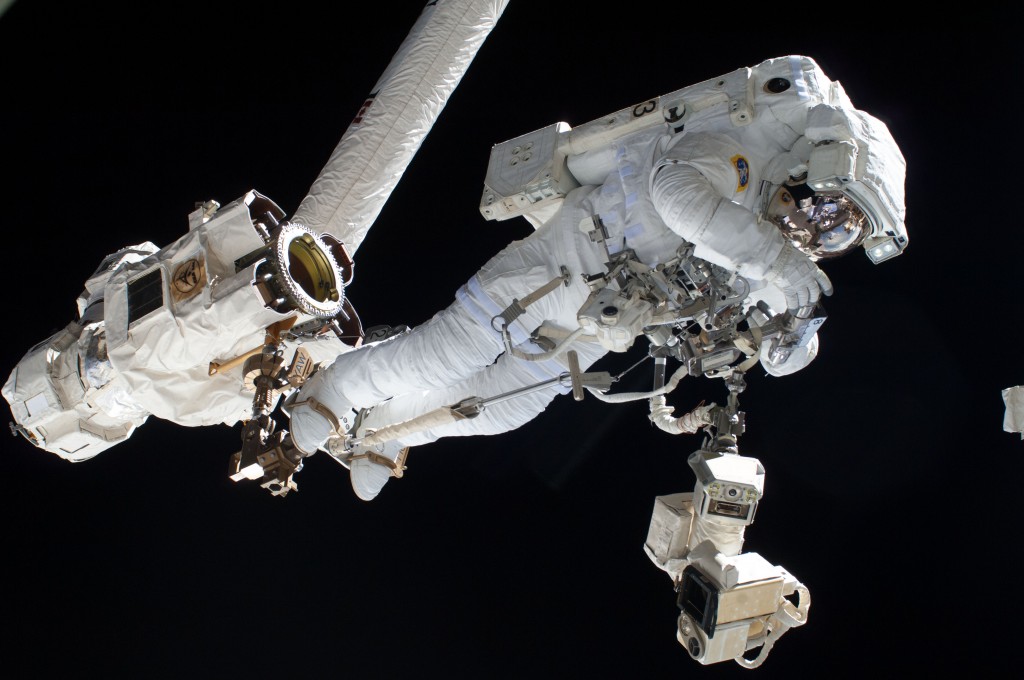 While the arm moves to the first of several repositionings, a display of incomparable beauty unrolls before my eyes: dawn in space. The colours absorb the black, white and grey at incredible speed in a chromatic explosion. We are flying above north Africa and red, yellow, purple and ochre fill my eyes with wonder.

For the hour and half that follows, I am transported from one side of the Station to the other by the robotic arm, both in automatic and manual mode, always with Karen at the controls. The task consists of taking two huge RGBs (Radiator Grapple Bar) from their temporary location to install them at their permanent one. Between stages, I uninstall a broken camera to take inside at the end of the EVA.

In what feels like an instant, it is time to free myself from the arm and return it to its initial state (by removing the APFR). Then I move to the “tip” of the ISS, the PMA2  – the old Shuttle docking point, which needs to be protected by a thermal cover. According to our plan, this task requires two astronauts because of the difficulties encountered on the ground in managing the cover. But Chris has hit a problem: while installing an electrical cable, he has to muster all his force to connect the ends to the structure of the Station. The cable has been rolled up for about 10 years and is now reluctant to straighten out,  so Chris tells me he will need more time. I will have to take care of the cover by myself. Galvanized by the challenge before me, I almost forget where I am: just at the prow of the ship, and with the whole ISS behind me! When the sun rises once again I am almost overwhelmed by what I see. 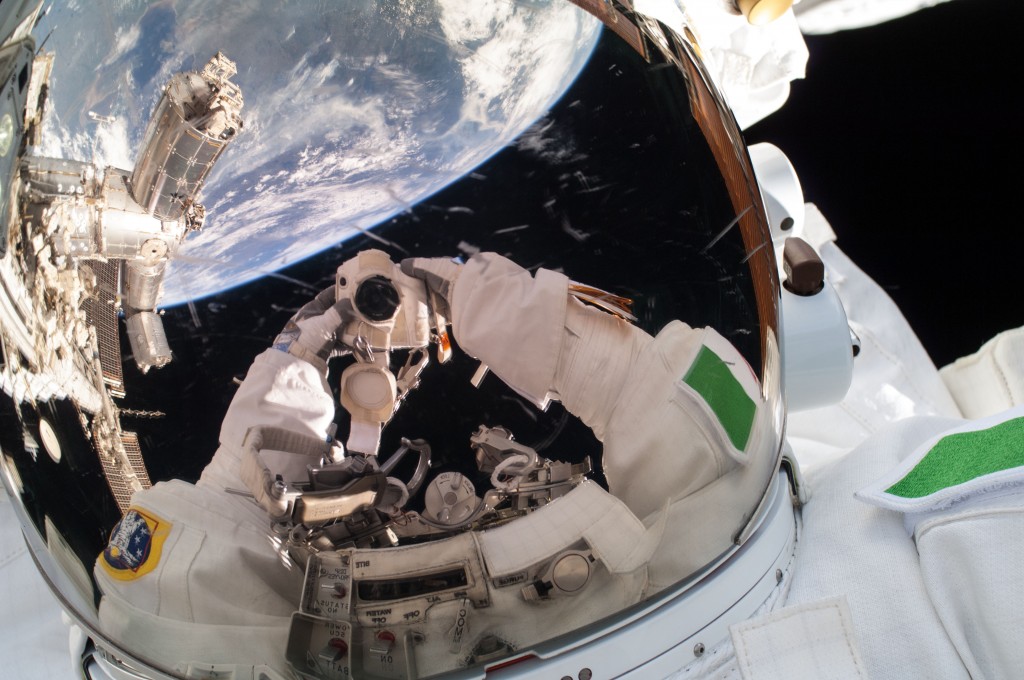 But there’s not a moment to waste because the job requires my full attention as I move from one side of the PMA2,  unfastening myself  from one place then attaching myself immediately to another. My hands are getting tired, because I have to keep moving the cover to secure it to the structure. I have no idea how long it’s going to take me, but when I finish we are still ahead of schedule. I have a sip of water, then I retrieve two of the containers we brought out with us and return them to the airlock. I install a third container that will stay outside for one week: we will bring it in during our second EVA. Chris finishes his last job, a precursor to one of my tasks next week, and I reach the entrance to the airlock. Before ingressing we can’t help but snap a few photos. Then I turn around for one last look at Earth, suspended like a jewel in the velvet blackness of space, before entering the airlock. Within a few minutes, Chris is also back inside and we are ready to close the hatch.

It’s all over in an instant. It’s been 6 hours and 7 minutes.