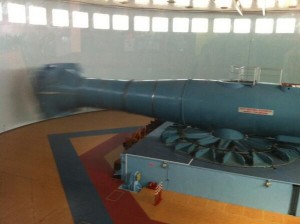 I have been asked “What do you feel in a human centrifuge?” several times in the last couple of days. I understand why people are curious, as even I do not get to experience sitting in a centrifuge every day.

Although I run the risk of being boring, I will first provide a technical explanation of what a centrifuge is. As far as I know, there are two types of centrifuges in aerospace training. The first type I believe, is the most common one in which acceleration is felt passing from the head to the feet. It is used to train high-performance aircraft pilots to sustain high levels of acceleration whilst flying – up to 9 g (nine times the weight you would feel pushing down on you normally standing on Earth).

Under high g-forces, blood that is normally pushed towards the brain pools in the lower part of the body (the legs), depriving the brain of blood. Unfortunately, we need our head more than our legs when flying a plane and this causes various harmful symptoms (all temporary as they disappear once the acceleration stops). We stop seeing colours as our vision turns grey, we experience tunnel vision and can even lose consciousness. Pilots are trained to prevent the symptoms using a breathing technique called the Anti-G Straining Manoeuvre or AGSM, as well as wearing an anti-g suit that maintains blood flow by applying pressure to the lower legs.

When a spacecraft returns to Earth the direction of forces is different from a high-performance aircraft as astronauts lie on their back pointing upwards. When a spacecraft reduces speed as it hits Earth’s atmosphere, the vehicle reduces speed from about 8000 m/s to just a few hundreds of metres per second. The spaceship crew experience this cosmic speed reduction as an acceleration from the chest to the back.

So the centrifuge at Star City’s Cosmonaut Training Centre generates ‘chest-back’ type acceleration. An astronaut-in-training has six runs in the centrifuge. The first time you get tied down to a special seat – which is much more comfortable than in the Soyuz spacecraft – for what we call a joyride. The acceleration profile is of a normal launch and reentry: the first acceleration has two peaks of around 3 g and the second has two peaks of around 4.5 g. Everything is managed by a computer and all we have to do is check that everything is functioning normally. A team of doctors monitor our heart rate.

The second centrifuge ride is more interesting because we get to experience ballistic reentry as if a spacecraft is out of control. Here we are subjected to a higher and longer level of acceleration – during a real re-entry it could go up to 11 g but we stay at 8 g in the centrifuge (this is for safety reasons as the centrifuge can generate more than 25 g!). We have to demonstrate that we can stay conscious throughout the reentry while performing a number of tasks such as reading an illuminated table similar to an optician’s eye-test or press on a button every time a series of bulbs light up that are placed in an 180° arc at eye level.

It may seem that a chest-back acceleration is a lot easier to sustain – I thought it would have been a walk in the park compared to the 9 g of an F16 jet aircraft! But I was wrong. At a sustained 8 g the blood has a tendency to drain away from the front of the brain forcing us to use the breathing technique. You should not forget that astronauts do not wear anti-g protection and after six months of weightlessness the body is not used to any acceleration.

The other four trials in the centrifuge are two dry-runs before each exam and finally the two exams themselves.

How does it feel? 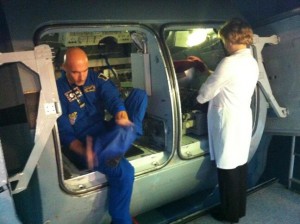 After this long introduction, let’s get back to what it feels like. Try and imagine you are in Russia, on the day of the actual exam where the decision is made whether you are qualified for a manual reentry of the Soyuz capsule. You are wearing a blue overall with the Volare mission patch and your name on it. The commission asks you if you are ready for the exam, and the examiner tells you that they will be waiting for you for the radio check.

The medical team place sensors for the cardiogram on your chest and check your heart beat and blood pressure. Now you are ready to step into the centrifuge: the cockpit is extremely familiar because it is identical to all other simulators. You strap yourself in the Soyuz seat, Казбек, with the four-point seat belt and the manual control system, РУС, in your hands. You have a button under each thumb: if you press the left one once, the capsule will tilt by 15 degrees to the left and if you keep pressing it will continue to do so by 15 degrees each time until you reach an angle of 45 degrees. To put it very simply, you can say that tilting left you lose speed faster (meaning that you perceive a higher level of acceleration), and tilting right the opposite happens. 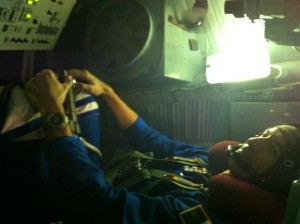 You are now wearing the headphones, the technicians have closed the hatch and you are completely isolated. You hear no sound but your own breathing, a sound amplified by the microphones. You will not be able to move for the next hour. The examiner gives the go-ahead for the first test – you have three to pass. The centrifuge starts to spin slowly and you feel the rotation but after a few seconds you get used to it and you are no longer aware of it.

You begin ‘piloting’ the capsule according to the profile calculated by the computer that appears on screen in front of you – you know that you will be subjected to a maximum of 5 g acceleration. The capsule with its initial 28000 km/h sinks through the atmosphere and decelerates rapidly: 2.5 g, 3 g, you start to feel it on your chest and breathing becomes difficult. You command the capsule to tilt right to decrease the acceleration, but the g-force continues to increase, 4 g, 4.5 g and rising. You feel the acceleration in your throat, talking to the examiner becomes almost impossible. 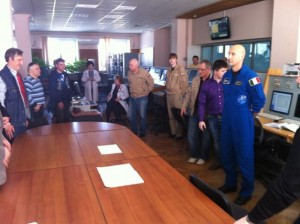 The g-force stops increasing at around 4.9 g. This is when you must dive to the left to lose altitude and approach the landing site. You only have a 20-km buffer to pass the exam and I can tell you that it is not much. Soon the second acceleration peak will start, and you need to be ready to tilt back to the right. You continue talking and reading each parameter to be sure that you did not miss anything during the check. A brief moment of hesitation, a small delay, is enough to fail. Despite having practised hundreds of reentry profiles, the number of possibilities is unlimited and each spacecraft behaves differently in addition you now have to deal with the acceleration. You must stay focused. The second g-force peak comes to an end and, because the capsule is flying at a low speed – a few hundred metres per second ­–, you have limited control over the capsule. You finish the test and from experience you know you are within the 10-km error margin. You passed this test!

Two more are yet to come.