Press conference with Heads of Agencies/representatives

Heads or top representatives from ISS agencies respond to press 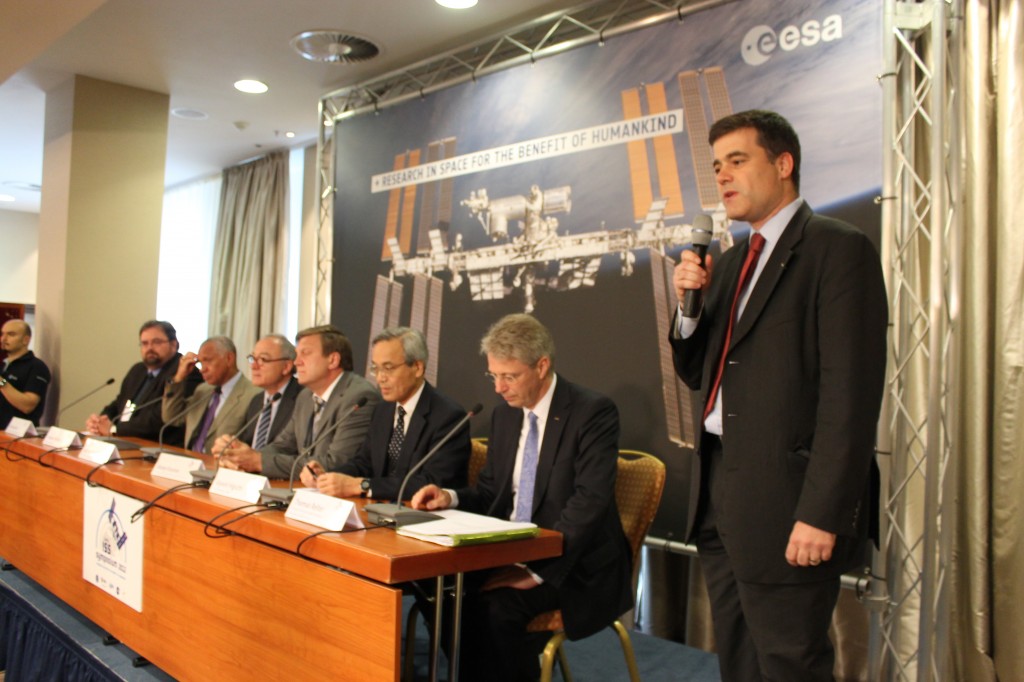 Thomas Reiter: It was a very successful conference with fantastic achievements shown. Having been involved in some of the experiments it is very rewarding to see the results. The transition from the assembly phase to the operational phase is complete and we are now operating in ‘routine’ mode. The results presented yesterday are remarkable in many fields. They gave a clear indication of the importance of this research. Clearly we must continue to optimise ISS, cost-reduction was mentioned often. There are limits but we will of course continue to reduce costs as much as possible.

Kiyoshi Higuchi: Japan’s module Kibo means ‘hope’ — we heard many impressive results and concepts. We have been using our module for more than three years. The most impressive thing for me is: I do not want to use the term ‘international cooperation’ I would prefer to use ‘human being undertaking’.

Alexey Krasnov: I agree the symposium was a success and showed tremendous results. I would like to emphasise that flying to the same destination for almost half a century we are still not finished, we have more things to discover. We can use the ISS to go a step further to a next destination that still can be defined. ISS has a very good legal framework, which is a chapter in further exploration.

Jean-Jacques Dordain: Thank you partners for joining us in Berlin. We saw significant results. We have only started utilising the Space Station. In only three years we have outstanding results demonstrating the Station’s unique capabilities. We have more users that wish to use the ISS than ever before. We have to choose projects and the short-list needs to be more efficiently handled, with a shorter turnover.

We are no longer the owners of the Space Station: the scientists are.

The partnership created is irreversible, we need to expand on this. The future is more and more partnership.

Charles F. Bolden: I will leave you with two messages to take away:

Gilles Leclerc: Canada will celebrate 50 years in space this year. Jean-Jacques Dordain often says that cooperation is a benefit of ISS. This whole conference shows that this is true.

A brief summary of Q&A with media

Q: 75% of ISS is American, so it is one big partner with [several] smaller partners. I understand when commercial companies go bankrupt.

Charles F. Bolden: We don’t anticipate companies going bankrupt. We adopted this model as the US could no longer afford access to LEO as well as exploring beyond. We feel if we can rely on industry, we can become more involved with partners.

Space-X is not on hold, they are trying to achieve their launch date.

Q: What cost cutting are you thinking of?

Thomas Reiter: We have already cut operational costs last year by 30%. We need to look at the lon- term perspective. There are limits to further reductions. I do not want to make reductions in the utilisation part but that is dependant on member states as they play a direct role.

Launch costs are not my role; I am just a customer.

Q: How do you judge success? Can you give specific ideas of how to measure success?

Charles F. Bolden: We are trying to establish metrics of success. The ISS ‘Benefits to Humanity‘ document is an example of quantitative measure of success. Another thing is operational costs; the lower the launch cost, the more I can do. Hopefully, we can share with the public in a couple of years that we have lowered costs.

Alexey Krasnov: Practically it is very hard to show success. However I have hundreds of very good examples of success. We are not ready yet for further exploration, we need the ISS to get ready. If we asked the audience if they need the ISS for further research, they would say yes.

Q: What would your wish be for ESA contribution after ATV?

Charles F. Bolden: I wish we could further enhance the partnership and focus on advancing the ISS. I wish that Jean-Jaques achieves success in getting member states to support him in his projects.

Q: Is it possible that ESA will buy seats on a US commercial launch vehicle in the future?

Jean-Jacques Dordain: We are developing launchers at ESA. We have new capability to transport crew on the Soyuz. When we were flying astronauts on the Space Shuttle we were paying; nothing is for free. If it is better to pay in cash to commercial partners or in barter, as before, we have to see. It is possible to pay, but we have to think of taxpayers’ money. Charles Bolden has said that commercial services are not solely US-run; maybe in the future an international consortium of industry could supply commercial services.