In Greek mythology, Ersa was the half-sister of Hermes, daughter of Zeus and Selene, and the goddess of dew. This name is fitting, as HERMES (short for Heliophysics Environmental and Radiation Measurement Experiment Suite) is the name of the NASA-led heliophysics payload that has been selected to fly on the same mission.

ERSA complements NASA’s Artemis programme that is returning humans to the Moon. 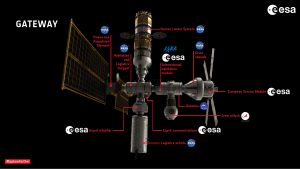 By monitoring radiation, the experiment will help researchers gain a complete understanding of cosmic and solar rays in unexplored areas as the orbital outpost is assembled around the Moon. Its hardware will actively monitor radiation at all times and return data for scientists from participating countries to consult.

As the first elements of the Gateway fly to position in a halo-like orbit around the Moon, they will pass through the Van Allen radiation belts. This an area around Earth where high-energy particles are trapped by our planet’s magnetic field. The particles are particularly harmful for humans. Ersa’s hardware will also provide useful information on to how to keep astronauts safe as they pass through the belts.

Once in position, the Gateway will orbit the Moon flying as close as 3000 km from the lunar surface and at its furthest, 70 000 km. The radiation investigation will continue to monitor the changes in protons, electrons and heavy ions and neutrons as they hit the measuring instruments.

The Power and Propulsion Element is set to host two external scientific investigations. The NASA-led investigation, HERMES, is the second instrument to fly aboard the Gateway. This is a Sun-oriented space weather experiment to observe solar particles and solar wind.

Large explosions on the Sun are unpredictable and can result in violent outbursts of radiation and energetic solar wind that could hit astronauts as they venture beyond the protective atmosphere of Earth.

Both ESA’s and NASA’s experiments will work together to supply much-needed information for forecasting radiation events and understanding how to build better spacecraft and protection for astronauts on and around the Moon, as well as other deep space environments such as on the way to Mars.

More science will be selected to fly aboard the Gateway in the future, taking advantage of the unique lunar orbit environment that cannot be duplicated on Earth or on the International Space Station.