Darkness quickly envelops us after we leave the astronomy building. My two Italian colleagues, Ivan and Alessandro, are faintly noticeable in their red suits, and I can hear Ivan as he falls in the snow. Some profanity – we laugh. And when I soon fall in the snow myself, I happily land – we laugh some more.

It is Thursday evening in late September, and on the basis of some not quite clear terms, our astronomer Ivan has declared this night to be “the last night”. The days have quickly become longer since August and the twilight now illuminates the horizon both hours before the sun rises and several hours after it has gone down. The Milky Way and star clouds are only visible for a very short time these days.

Ivan, Alessandro and I went to the astronomy building to get away from light of the base. It is still so cold that our ski goggles and masks froze when we arrived – but the astronomy building is lukewarm and over the next few hours we alternately took trips out into the snow to look at the sky and take pictures while the starry sky rotated almost invisibly over us. And when it was time to return to the base, we decided to turn off the light in the astronomy building a few minutes before departure and at the same time leave the headlights on… and try to walk a little way back to the base in the dark, despite the snow.

When we get back on our feet and brushed the snow off, we look up. The stars glow brightly with their different colours – from the bright white, to the cool blue and slightly reddish. Some satellites are speeding across the sky at high speed and we take a few star shots. The Milky Way stretches cloudy and with colours that end up in the almost brownish colour above us and are crossed by the green broken shade of the laser from one of the measuring stations. Once again we have to marvel at the greatness around us and it is with the hint of a feeling of sadness in our stomach that after a few minutes we turn on the headlamps again and go back to the base to get the warmth of the nose tips, fingertips and toes. “The last night,” says the astronomer as we come inside. “Adieu!”.

There is no doubt that we are seriously in a transitional period. The Sun is back, the night is “disappearing”, temperatures are rising (marginally), departure and arrival times are changed daily, future staff, holidays and plans are being talked about. Bed linen is washed, mattresses changed and cleaned. There is a dream of fresh fruit and talk of infection risk when the new staff comes with all their viruses and bacteria – we consider whether they should all be given a mask in the door upon arrival, and only with it on and in exchange for fresh fruit, let a few inside.

We are cleaning up, throwing stuff out and suddenly there are even empty shelves in the ESA laboratory, where the door is now only decorated by two notes with times for different studies. One long one for October and a shorter one for November. The mysterious “Homair” project still hangs intact on the door – fortunately no one has wanted to puncture a bubble and sniff some domestic air (no one knows whether it is the smell of sour socks or cake hiding inside, no one has dared).

All the while, the base crackles in the Sun as the metal dissipates in the heat it gives off and you can now see a clear swing upward on the temperature curve during the day. The ice on the inside of the panes is melting and some of the rooms not in use now have transparent panes for the first time in several months.

Also in Concordia is the sound of dripping, a sound of spring!

September is one of the toughest months to get through in Antarctica for those who spend a year in the cold. A previous Concordia team hung a comment on the board in the dining room (there is a tradition that every team that overwinters in Concordia hangs a board or similar with names and pictures – or other creative works – we made a watch). 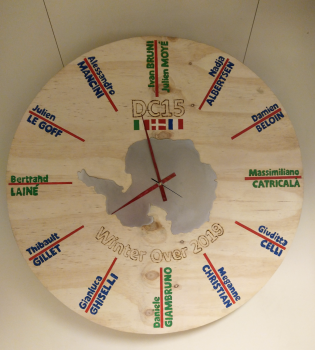 But – there is also other research showing that crises come around mid-winter when darkness is most dark and bacon rations the lowest. Recently we talked about it with the team, and there is a lot of individual variation in what we each experienced as the hardest time – for me, it was without a  doubt the summer period with too many people and too much talk and gossip, despite still having fresh fruit in stock and liquorice pipes in the drawer. For others, it was the middle of winter or August / September that pulled out teeth, while others are feeling the most difficult period so far the present time when we are already mentally heading out the door. Others have experienced that mood and morale have fluctuated from one end of the scale to the other evenly throughout most of their stay.

There are many theories about the psychological effects of being isolated in Antarctica, both how they manifest and why. Some of the possible causes I have already looked into, namely sleep disorders and lack of daylight. But other studies have found anomalies in and evidence of decreased activity in winter’s metabolism – the so-called polar T3 syndrome (T3 is one of our metabolic hormones) and I recommend watching a documentary from the US McMurdo -base, (the documentary is called “A Year on Ice – Wintering at McMurdo”). A third theory deals with people’s perception of time and our tendency to consider time periods relative to others. Thus, it is believed that the problems around midwinter and in the months immediately following are due to the feeling that there is still a long, long time left, because the time already passed may seem long. Others again think that we are simply getting tired. Mental resilience and ability to deal with and withstand stress simply wears down slowly during the stay and the crises therefore come into being during the last months of the stay.

It is a strange feeling to sit here in Concordia in October, almost exactly 11 months after I first set foot on the continent, and look back. For me, winter and isolation have gone tremendously fast. There have been periods that have been more challenging than others – weeks of sleep deprivation. I am more easily knocked out of my sleep rhythm here than usual – but on the other hand you can enjoy the tranquillity of the base at four in the morning and then take a power nap in the middle of the day. And there have been times of bad news from home where I had to accept not being able to do anything. But fortunately there has been good support, both here and in the Northern Hemisphere.

And then I have been fortunate to have a really exciting and varied work and exciting and interested partners. And also time to immerse myself in my own projects and be creative – it is and has been a huge privilege.

I have been learning a lot from my colleague in the hospital, Gianluca, who is a trained trauma surgeon and general manager of an intensive care unit. We have some equipment and material in the hospital, including enough plaster to be able to make full-body casts on all people and penguins in Antarctica – the hospital doctor was an orthopedic surgeon for a year and he would obviously be covered if everyone else in the base broke all their bones – several times. During the year I have been given courses in ultrasound scanning, especially of large blood vessels, which are clearly Gianluca’s favourite area. We also trained intubation and respiratory therapy and a few weeks ago we arranged a small sewing course for those interested – the kind of sewing that will close wounds.

There weren’t a lot of people interested and while we had plenty of expired material to practice on, it was a little tricky to find something to sew… so we had to have the station chef involved.

Unfortunately, there was no pork roast, so we had to choose between a piece of beef (possibly some sirloin, I’m not quite sure – it’s not exactly my peak competence to identify pieces of meat) and a giant mortadella sausage wrapped in some plastic-like material , which may resemble skin – well… the skin of people with very dry and brittle skin, as they would have after long-term treatment with adrenal cortex hormone. But it worked and having needles, tweezers and scissors in my hands was fun and homely again. The mortadella was an extremely cooperative and as a patient it complained very little, it also ended up being invited to dinner that same day…

Finally, I attach a few pictures of the sunset. For though we may have had the last night, we are now, and for the next few weeks, enriched with stunningly beautiful sunsets. And because there are no trees or buildings to block the view, in the hours around sunset you can see the earth’s shadow in the atmosphere – like a darker purple colour of the sky in an indistinct stripe that curves over the horizon.

Imagine being able to see the shadow of the Earth!! That’s crazy! And very beautiful and it is perfectly fine that we experienced our last night here, although it is also a slightly melancholy “Adieu!” 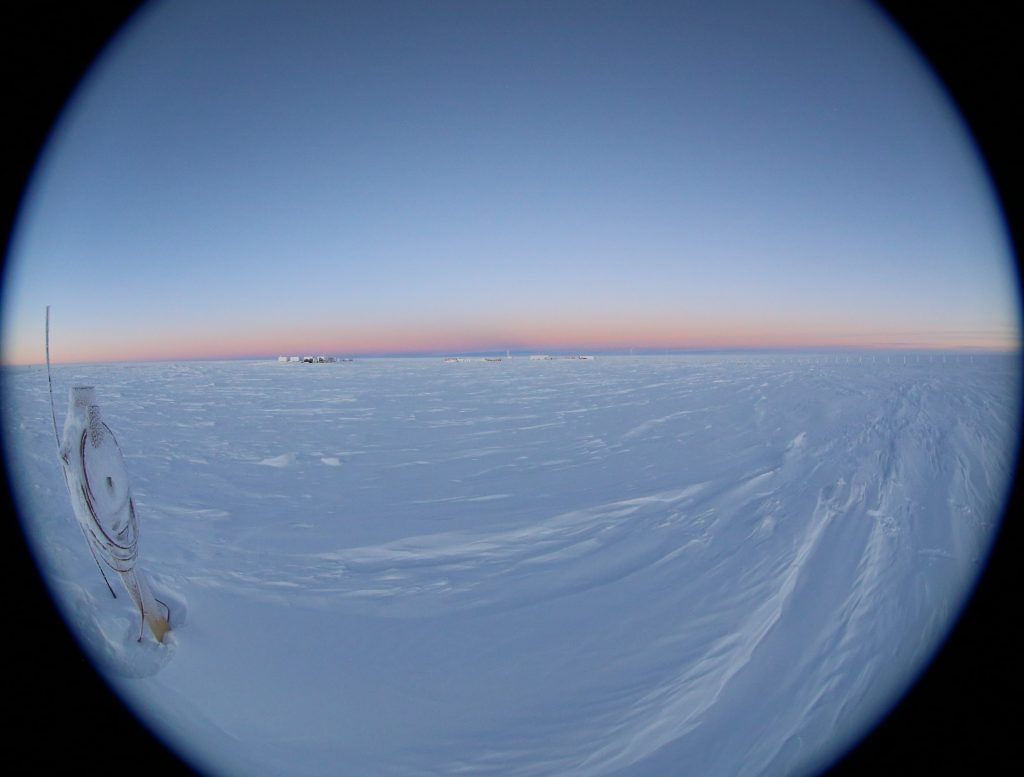