A vampire in distress

It’s no secret that our bodies need oxygen. Oxygen is transported from the air we breathe via the lungs into the blood, which the heart then pumps out into the body to our various tissues – organs, muscles and not least the brain. In the blood, oxygen is first bound to haemoglobin, which is part of our red blood cells, and then released again into the tissues of the body. How much oxygen is bound to the haemoglobin when it leaves the lungs depends on air pressure among other things, and is expressed as a percentage as the oxygen saturation rate. 100% is the maximum degree of saturation, and at sea-level, the normal value for healthy people is around 98%, this level is slightly lower in smokers, and goes down to about 90–92% of heart and lung disease. As air pressure is lower at Concordia, oxygen saturation levels reach 80% to 90% (and even lower, if you go to higher altitudes), and we can feel this! When somebody steps of the aircraft on arrival at Concordia their body immediately begins a series of measures to compensate for the shortage of oxygen – and 6-12 hours later this is felt as symptoms of altitude sickness. 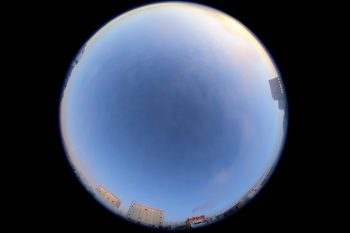 But unlike when we exercise, this process never stops in Concordia and we continuously breathe faster than usual. And the disadvantage of the increased breathing is that we not only get more oxygen into the body, but also rid of more waste gases in our breath, including carbon dioxide. Carbon dioxide acts as an acid when it is dissolved in our blood and since the body prefers a specific and constant pH, it can pause breathing at night for short breaks, which I wrote about in the previous post about sleep. By holding the breath for short periods, you retain a little of the acid in the blood and can maintain a satisfactory pH level. But these breaks in breathing can wake you up at night and sleep becomes poor. This does not really get better over time and in the long run affects concentration, memory and mood.

While breathing and heart activity increases, part of the body’s hormonal systems are activated and some continue often hours to days after arrival.

Blood pressure is increased in the lungs as small vessels in the lungs contract – most likely to direct the blood towards those parts of the lungs where there is the most oxygen. In the long term, this reaction can cause changes in the heart muscle and can also be life-threatening if the blood pressure in the lungs becomes so high that fluid build ups in the lungs – a condition known as HAPE (High Altitude Pulmonary Edema).

In the rest of the body, on the other hand, the blood vessels will expand to allow more blood flow, and thus more oxygen, to enter the tissues. This vasodilatation will cause blood pressure in the body to decrease, which can cause dizziness. However, the drop in blood pressure is temporary, as some of the body’s regulatory mechanisms eventually replace it, including the increased production of the hormone EPO. EPO helps the body form more red blood cells, increasing our ability to transport oxygen into the body. EPO levels rise a few days after reaching higher altitudes and a little surprisingly, it drops fairly quickly again, though not to normal values ​​– this only happens when you are at sea level again. This actually results in the blood becoming more concentrated – you could almost call it thicker – this sometimes causes problems for me as the base vampire – there is simply too little cells for me to take adequate blood samples.

One organ that also suffers from oxygen deficiency is the brain, which usually accounts for around 20% of our oxygen consumption. Many people would actually faint because of the lack of oxygen if they were simply moved from 0 to 7000 m.

Some hormone changes cause the stomach to empty more slowly than usual, which can cause nausea. But the production of the appetite-regulating hormone Leptin also changes. This is probably part of the explanation for why people living in Concordia lose weight – although there are exceptions. But it should also be remembered that the many months of isolation, frostbite, lack of licorice and so on also come into play over such a long time. 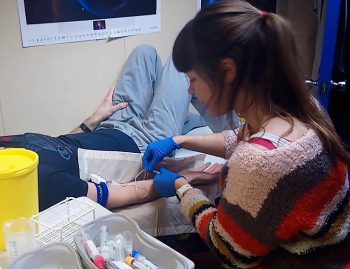 That was a slightly simplified representation of some of the changes that occur in the body when living with hypobaric hypoxia. It is a field that is still being researched and there are many hormones at stake. A large part of these is included in the package for which I now take blood samples every other month – 27 ml of blood, which I put into 13 small tubes each time. A total of 169 per person during the year.

The result is extremely exciting – not least in relation to space travel! In fact, I know space agencies are considering to turn up the oxygen levels when astronauts sleep to counteract disturbances in the night’s sleep hopefully resulting in better concentration and memory.

Many of us are far better off now than at the beginning of our stay in Concordia! There are no longer signs of fluid retention or headaches, but appetite fluctuates and many people continue to have sleep problems. We breathe our way up the stairs and some have to stick their heads between their legs to regain their breath when they reach their floor.

How I wish for some nice, thick air…