It is Tuesday and the time is exactly 18:00. I am sitting in an office chair in the ESA lab, reading star cards. I try to get them to fit my perception of the corners of the world here in Antarctica – no easy task when you are east-west blind.

Behind me sits one of our glaciologists with his small eruptions. He is inflating (virtual) balloons to the breaking point as part of the cognition test in the SimSkill project . Most of the French and Italian profanities in my vocabulary I have learned in the ESA lab, and I sometimes can’t help but laugh out loud.

Both of our phones vibrate with a text from our astronomer to our WhatsApp group: “Aurora now”. I switch the screen on my computer to one of the cameras mounted on the astronomy building. There is ‘Southern Light’ – but this camera picks up far more light than we can with the naked eye – so we are never sure if we should go out or not.

This time though it looks more powerful on camera than it has in a long time. While I often saw the Northern lights in Greenland, the Southern lights are a more rare experience.

With the rapid return of the Sun and the location of the base in relation to the South Pole, if there is something to see, you better go see it, because the opportunity will not be offered again for the remainder of our stay in Antarctica. I suggest to the glaciologist that we go outside, and he is not difficult to persuade.

Outside there is nothing immediately unusual to see. Our eyes are naturally attracted to a bit of light on the horizon, where the Sun has set. The Milky Way is a strip across the base. As always, it is an amazingly beautiful sight.

The cold tears a little at my face: –65°C and enough wind to make it feel like –85°C, according to our weather station.

But then the glaciologist exclaims: “There?!” I turn my gaze away from the horizon and dusk, to the point in the sky the glaciologist points to – there is a stripe in the sky that is not the Milky Way, at first just white and cloud-like, but as we move to the other side of the base, there is no doubt – the green hues are visible and the curtain-like waves in the sky are unmistakeable. There are the Southern Lights – visible!

Slightly surprised, we fumble around with cameras. None of us brought a radio, so the glaciologist runs inside to spread the news. Shortly afterwards he comes back with the other glaciologist – I cross them on the metal stairs to the base entrance, as frostbite has unfortunately quickly taken over the fingers of my right hand. Southern lights or not, there is nothing else to do but walk inside.

Inside I share the news with several members of the base. Most people have seen the astronomer’s message but chose to stay indoors due to the cold and past experience with feebly visible Southern Lights, including the astronomer! After some (strong) insistence on my part, and a few Danish curses due to pain in the fingers, they head out to find the polar attraction. And fortunately, most of us get to experience the wondrous sight.

According to ancient Nordic mythology, the Northern Lights were a fence built by the giant Eymer’s eyelashes to keep the giants out of Midgard. Or they are otherwise the light reflected from the shields of the Valkyri.

In Greenland, the Northern Lights are said to be the spirits of the dead playing ball with a walrus skull, and I cannot help but wonder if spirits are at play down here in Antarctica. Scott and his company, maybe?

I have experienced Northern Lights so powerful, it seemed you could raise your hand and touch them. How they radiated from one point in the sky really brought home the idea of heaven. The aurora is an amazing experience and one that I don’t think anyone gets tired of – even if you live a lifetime with it as a frequent guest.

The astronomer explains over dinner that the aurora is a volatile size – it can be powerful one moment and gone the next, or linger for hours.

Though Aurora, whether it is Aurora Borealis (Northern Lights) or Aurora Australis (Southern Lights), may seem other-worldly (whatever that may be), it is in fact very terrestrial. I am quite intrigued, and almost a little saddened, that there is actually a natural explanation for such a phenomenal sight. And it’s actually not that complicated even…

But first, a disclaimer: I am not an expert on the Aurora, Earth’s magnetic field and everything else I’m going to try to explain. But I am fortunate that Antarctica’s most talented astronomer, Ivan Bruni, patiently explained the phenomena. Also, during the Antarctic summer we were visited by some American scientists who study so-called space weather. They stopped in Concordia for a few days and gave a talk about their research, which was tremendously exciting.

And so, let’s begin:

The Sun, which we have not yet tired of down here, is the cause of many good things, including the aurora.

But what are the Southern/Northern lights/aurora/polar light? (The dear thing has many names!)

Aurora are formed when electrically charged particles from the Sun enter our atmosphere and react with some of the gases found in the upper layers of the atmosphere. They simply transfer some of their energy. This energy is then released from the gases in the form of light (photons) – and we get aurora.

As you can probably guess from the above, Earth is not the only planet that has Aurora . Aurora only actually requires the Sun and a planet with an atmosphere. But why don’t we have aurora here all the time and across the globe?

The Sun sends out electrically charged particles into space, such as electromagnetic radiation, at speeds that can exceed one million kilometres per hour. Part of this radiation makes its way towards Earth. However, as most people know, radiation is generally not a good thing – and we are so lucky that Earth is surrounded by a magnetic field that shields us from most of the radiation. 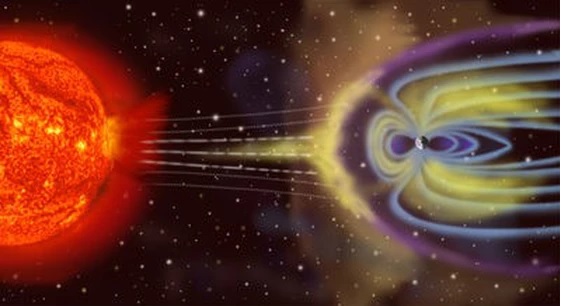 One final note: radiation from the Sun also causes some trouble as it enters the atmosphere – it can disrupt GPS signals, satellites, power supplies, and affect our weather. This is what you call “space weather” – a really exciting field of research.