How do you assess global warming when living in the coldest place on Earth? Learn more about climate change in Antarctica and how researchers are tracking it in the latest dispatch from Concordia research station.

I promised at one point to write a little about climate change. And when I try to live up to this, it is with polar glasses on, considering the loss of ice in Antarctica. Please keep in mind that what I discuss below is one part of the bigger picture; climate change does not “only” result in flooded basements and sold-out inflatables. It entails, among other things, natural disasters and changing ecosystems, and consequent poverty, homelessness, hunger and disease that will have major socio-economic consequences, especially in countries that are already vulnerable.

We here at Concordia participated in the international climate march in March, albeit a few days later. Naturally, climate change is at the heart of the projects being conducted by many of the research teams here. But it is not actually something we talk about very much. Looking around at the base, you may well marvel at the fact there are few measures taken to reduce Concordia’s imprint on the globe. 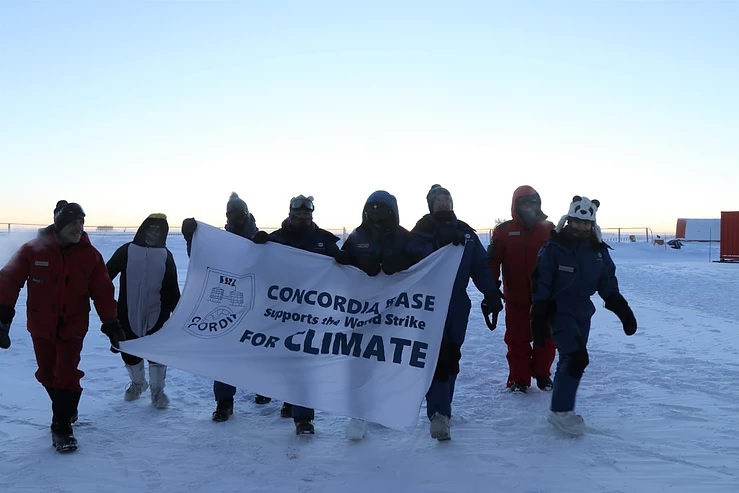 Living in Antarctica it is actually quite difficult to relate to the fact that global temperatures are increasing, especially when the thermometer says –50 °C, the fuel freezes and one gets frostbite from lifting a plastic bar.

According to a special article in the French Le Monde, the Earth’s surface temperature has risen on average one degree worldwide since the pre-industrial period of the mid-1800s, and 0.38 degrees between 1981-2010. That doesn’t sound like much in Antarctica, when the temperatures here can swing 30 degrees from one day to another. Unfortunately, that is, I think, one of the major reasons why climate change is not on our minds down here.

From a personal point of view and written with a slightly bad conscience, Antarctica for me as a Dane (and person) has, until recently, seemed incredibly far away ¬– both geographically and in my consciousness. I have seen maps where Antarctica wasn’t even included! And where we have a historical, political and geographical relationship with Greenland, it is quite different with Antarctica.

There are no direct flights from Kastrup, Copenhagen’s airport, we have no research stations or Danish-language workplaces and no close history with the country. In the past I have, quite frankly, most associated Antarctica with cold, polar scientists with missing fingers and/or scurvy, penguins, lack of polar bears and bacon. So the melting ice has not been as big of a deal as it should be.

But fortunately I have become wiser and I can now bore you with the reality, or turn you into environmentalists!

About 90% of the planet’s ice can be found in Antarctica. If it all melts, the oceans will rise about 70 metres. This is almost 10 times the sea rise we would experience if all the ice in Greenland melts. It is now estimated that the sea levels have risen 1.3 cm since 1979, and it is currently feared that as early as 2100 we will see a total increase of up to 1.8 metres – solely because of Antarctic ice melt.

Several articles published in the journal Nature, based on data from satellites and measurements of ice thickness, outline the ice melt in Antarctica since 1992; in West Antarctica especially, one team found a rather dramatic increase from 2010 to 2018. In the picture below the red areas mark a total loss of ice and the blue areas snow and ice accumulation. It is clear that both the eastern and western coasts are hit hard by ice loss.

In West Antarctica, the narrow band of ice along the peninsula is holding back the mainland ice, and melting can quickly accelerate if this ice along the coasts disappears. In a 2018 the peninsula is described as one of the areas in the world that has seen the greatest temperature increases during the 20th century. The air temperature increased two to three degrees between the 1960s-1990s and the surface temperature of the water 0.3 to 1.5 degrees. Furthermore, ice loss has been recorded across approximately 75% of the area over the last 50 years.

Further inland, the situation is different thanks to persistent frost and lack of water. For this reason the research that takes place here in relation to climate change focuses particularly on the composition of the atmosphere and the presence of greenhouse gases such as methane and CO2. Some projects on the base are measuring these particles on the surface while others are hunting ‘fossilised’ particles from the past, found in ice cores. It is important to distinguish between changes that have taken place recently and those far back in time. 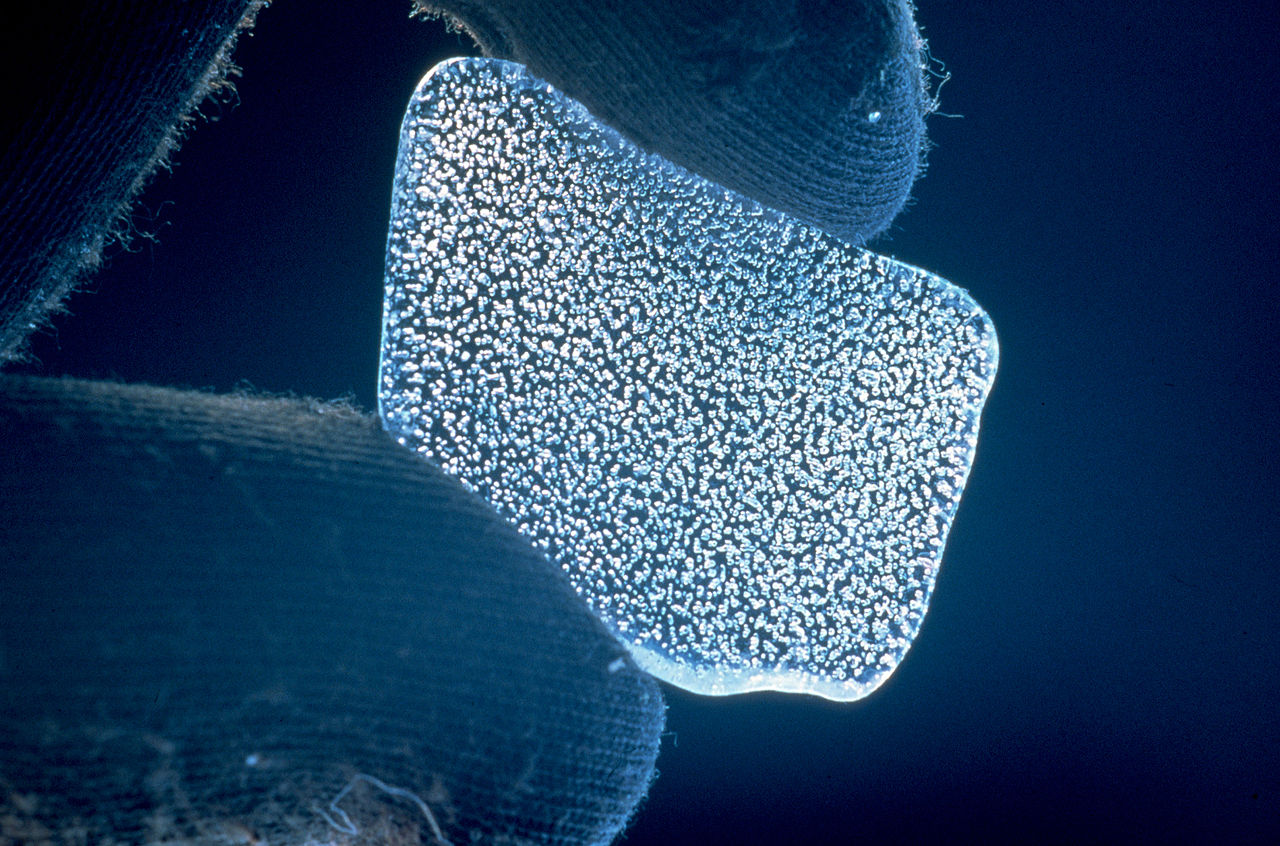 But before I begin to tell you why the interior of Antarctica is such a good place to study this kind of thing, I must emphasise that I am neither an expert on ice or the atmosphere and its composition. But I have tried to listen and read on the topics – so I hope the following is intelligible and reasonable.
The ice in the polar regions is widely used to study Earth’s climate change over a long period of time, and the interior of Antarctica is a particularly good place. This is partly due to the fact that Antarctica is a desert where snowfall is extremely modest. Researchers don’t need to drill very deep to encounter really old ice – this is opposed to drilling in Greenland, where there is much more rainfall. Another advantage of drilling in the heart of Antarctica is that the ice does not move very much and is extremely stable.

What is so interesting about the ice? Isn’t it just frozen water?

It all starts with snow. As snow falls, the lower layers are exposed to higher pressure and are eventually compressed into ice. The air, which is mixed with the snow, is preserved in the ice as tiny air bubbles; scientists are especially interested in these bubbles any greenhouse gases such as methane and CO2 they contain. They are tiny samples of prehistoric air and allow us to compare changes over time up to the present day. Taking samples for comparison from the northern and southern hemispheres also makes it possible to assess whether these are worldwide changes or local changes.

The EPICA project (European Project for Ice Coring in Antarctica), which was started before Concordia was built, and which last drilled in 2004, was able to retrieve an 800 000-year old sample from an ice core, making it the oldest same to date. By precisely assessing the varying content of particles, it was found that during this period Earth had eight ice ages, each of which lasted just over 100 000 years. This is important knowledge in relation to assessing naturally occurring climate change – without human interference – and to distinguish between the different types. Unfortunately, the EPICA project also found traces of humans in the atmosphere: the ice contains 28% more CO2 and 134% more methane than at any earlier time one measured so far.

Currently researchers are launching a new international project about 40 km from Concordia, in a place called “Little Dome C”. The “Beyond EPICA” project aims to drill for ice cores up to 1.5 million years old – equivalent to 2.75 kilometres depth! Surveys of sea sediment have in fact suspected that before this period, ice ages were just over 40 000 years apart. “Beyond EPICA” hopes to verify this. The project will start officially next summer and last for over two years.
Exciting!

As I mentioned above, we could undoubtedly do more to reduce Concordia’s climate impact. One may wonder why solar energy is not used to any greater extent during the summer, when there is virtually no cloud in the sky, but high sun 24 hours a day? Or why our yogurt is sent in 200 ml plastic containers, which are then packed in cardboard, when we could make it ourselves? Or why there are no reusable containers, so avoid wrapping food debris in plastic film or metal foil? Or why gluten-free pasta is transported all the way from Italy, only to be returned because no one at the base is allergic?

We produce huge amounts of waste on the base. We can break down some of the food residues on the site by means of bacteria, but the rest is compressed and sent to Australia for further treatment.

We use about 200 m3 of fuel a week to generate electricity. In addition, just over 90 litres of water per person per day is used, and some water is reused. However, just over 5900 m3 per week is produced, so as far as I can figure out, a good one third is recycled.

We have made some changes. We swapped paper towels with fabric towels that can be washed and reused – we made our personal fabric napkins of old tea towels.
I know that the chef is also trying to get more permanent, or at least recyclable, packaging for the base next summer.

I have a little dream to see solar panels, greenhouses and algae and/or insect-based food. Algae produces oxygen and absorbs CO2 and is edible. They are already testing this on the International Space Station. Insects are pure superfood and can decompose waste while they want to be eaten.

But I think especially the insects will be difficult to sell, especially to the Italians. When you are not ready to eat gluten-free pasta, there is very little chance you will welcome penne a la grasshoppers.