Dr. Carmen Possnig is the ESA-sponsored medical doctor spending 12 months at Concordia research station in Antarctica. She facilitates a number of experiments on the effects of isolation, light deprivation, and extreme temperatures on the human body and mind. In the following post, Carmen discusses life in Antarctica. 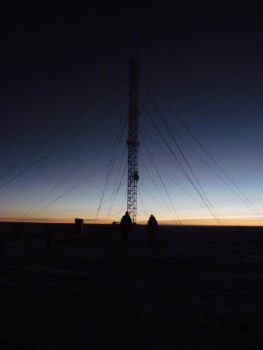 The last rays of sunshine on the horizon from the American Tower at the end of April.
Credits: IPEV/PNRA–F. Cali Quaglia

After the last run in the gym, I was a little proud of myself because I had run very fast and also for over an hour, which is remarkable with our oxygen content, as I told myself. Pride would not last long.

Absence of mind and confusion are part of the winter-over syndrome, an accumulation of symptoms typical of Antarctic expeditions. Most hibernators experience this syndrome in different forms. It was first described by Frederic Cook in 1900. Cook was the doctor of the Belgian expedition, the first hibernation in Antarctica. Other symptoms include irritability, depression, difficulty concentrating, memory loss, insomnia, aggressiveness, and the occurrence of mild trance states (also called the “Antarctic stare”).

It can have harmless effects (like trying to turn off the light with a phone), but on the other hand, if you put 13 such people together for months, it also leads to conflicts. Everyone reacts in their own way – Antarctic stare is common, as are sleeping problems, upsets and confusion. Not permanently, though.

This state is probably triggered by three factors: isolation, confinement and environment. ICE!

People have been spending winter in Antarctica for over 100 years. The stressors are similar today as they were then, although the focus is different. We live comfortably in our stations, no sight of tents, frozen sleeping bags, no worries that we run out of fuel or food. We Skype instead of writing letters that could arrive years later.

With new technologies and improvements in living conditions, environment as threat is considered defused. Instead, the social environment has become the biggest stress factor. We spend nine months here with people we did not know before, we did not choose and whose reaction to the ICE factors cannot necessarily be predicted.

Back to the winter-over syndrome. It is an inevitable consequence of the stress we are exposed to here every day: Antarctica tends to turn events that would have seemed unimportant and glamorous in Europe into major problems – which in the worst case scenario are reconsidered hundreds of times and thus experienced even more dramatically. 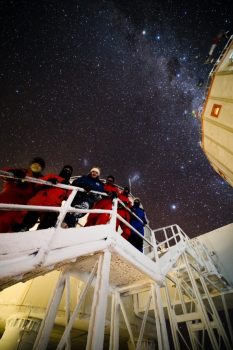 The separation of family and friends, the lack of emotional support, sexual deprivation, personal crises in Europe, which create a feeling of powerlessness, all contribute to the problems of isolation.

But as much as we are isolated from the outside world, it is difficult to be alone for a long time within the station, the group. The station is large, but the presence of the others can always be felt. The thin walls do not allow for much privacy. Soon everyone will know who talks to whom about what and when.

Being locked up also has the effect that one cannot escape difficult social situations for a long time. Minor conflicts are common, especially in the dark months, but knowing that it would not be wise to escalate the situation. We face them, and doing so at least no major dramas arise from it.

As a third factor, although now defused, the environment still plays a role in the context of stressors: cold (beyond -80°C), darkness (the night lasts three and a half months), altitude (we feel thanks to thin atmosphere as if we were at 3800 m), low oxygen content of the air, extremely low humidity. There are many physiological effects: the deep sleep stage is completely absent (REM phases are rare), dyspnea and hypoxia are our constant companions, headaches, disturbance of the 24h rhythm due to light conditions, a suppressed immune system and a suppressed thyroid function are only some.

Several studies have shown that the strongest impact can be seen shortly after halfway through the mission, in our case in the months of July and August. This is called the three-quarter phenomenon and is independent of the length of the mission. It results from the fact that one realizes that only half of the expedition is over, and accordingly an equally long time of isolation still lies ahead. 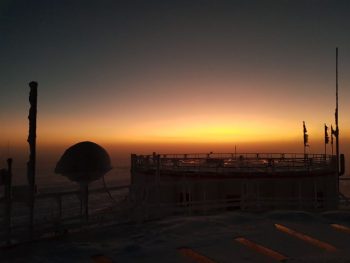 First sunrays after more than three months of darkness, seen from the roof of the station
Credits: ESA/IPEV/PNRA–C. Possnig

These symptoms are not persistent – they disappear when you leave Antarctica. In the long term, on the contrary, hibernation usually has positive effects on health – both mentally and physically. Healthy effects result from the successful handling of local stress.

The three-month night is over in mid-August. Suddenly it is dazzlingly bright for a few hours and the landscape seems completely changed. I liked the long darkness – the overwhelming Milky Way, an endless starry sky, bizarre shadows in the snow, shooting stars, a feeling of security.

Nevertheless, for some of us it is a relief. Many felt the absence of the sun as a burden and since it became brighter on the horizon, the light was a constant topic of conversation.
On August 11th we see, for the first time since May 5th, a part of the sun over the horizon.