Didier Schmitt is a member of the space Task Force at the European External Action Service. He is a regular opinion writer in major newspapers and magazines and has published a book on foresight. He will be contributing to this blog during his visit to Concordia – we join him on his final days at the coastal station Dumont d’Urville:

The ice sheet becomes more dangerous by the day. Crevasses formed around the island and the usual access points have been compromised. A small team went out to test the ice thickness. First, they carefully drilled just next to the helicopter on stationary flight. A map was then updated; the next version will be done using a high-resolution satellite image of the surroundings.

American, Australian, Belgian, Spanish, Swiss, Chilean and Japanese scientists and technicians are present on the base. A significant proportion of the research is done by PhD students, especially during winter-over. As not all specialties can be represented, they have to be polyvalent.

Glaciology is the main activity in Antarctica, obviously. To get a flavour for field work, I went with a team to the top of the glacier by helicopter. We spent several hours dismounting and remounting a GPS station. It was the ‘hottest’ day they had ever experienced here; we were only wearing shirts. They also got to go into the glacier, getting fabulous views of blue ice. Unfortunately, I missed that trip.

Ornithologists study Adélie penguin behaviour using camera sensors and very advanced image analysis to track individual birds. Massive ‘big data’ is generated and computed by a mathematician who joined the team. Birds are tracked with GPS and other sensors; the team was relieved when a few equipped birds came back to their nests. The scientists take day and ‘night’ shifts to visually identify and remove the sensors without harming the animals. They were pleased when I showed them some Sentinel-1 data they can use for correlating feeding locations and sea-ice holes. Others study the predator birds’ life cycles.

A form of radar using lasers called LIDARs are used to evaluate real snow fall and windblown snow. Meteorology balloons are released every day, whatever the weather conditions. In addition, air chemicals are trapped and ozone-based catalysis evaluated. Seismology and magnetometry instruments and their wiring are renewed at various places. There is even time-synchronisation for satellites using an atomic clock.

At the continental Prudhomme station, just 5 km away, the third and last raid is nearly ready to leave; it is about double the size of the one I participated in. They are in a hurry as temperatures on the return trip, in three weeks, can easily drop down to -50 °C on the plateau. 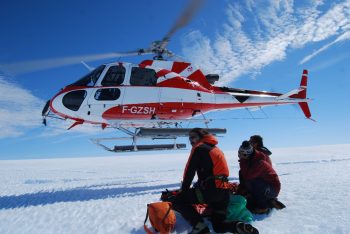 One flight you don’t want to miss. Credit: ESA/IPEV/PNRA–D. Schmitt

Finally, it is about time to leave. Unfortunately, for some the planning has changed significantly! The plane that is meant to bring them back from Concordia to Dumont d’Urville (to catch the Astrolabe ship) has a significant technical problem. I am glad to have taken the first one, the only plane up to now.

Let’s see how things will evolve for us in the coming days, as Antarctica is unpredictable!