A day in Dumont d’Urville

Didier Schmitt is a member of the space Task Force at the European External Action Service. He is a regular opinion writer in major newspapers and magazines and has published a book on foresight. He will be contributing to this blog during his visit to Concordia – we join him at the coastal station Dumont d’Urville:

We walked on the sea-ice with an expert as it started melting around the island were the station is. It was fascinating, although I was a bit anxious. Under the first ice crust that can break – and it did – there is 20-30 cm freezing-cold water and then soft ice (locally called ‘sorbet’…).  We took survival equipment and radios to call for help and helicopters are never far away… 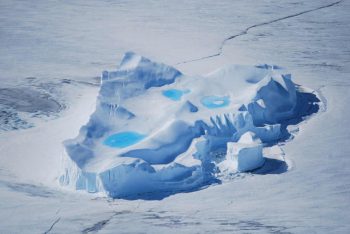 The landscape was marvellous as we walked between icebergs caught in ice-sheets of various textures. A few noises remind us that the glacier is very active and that we cannot go close to it – it advances by 2 m a day on average!

Penguins look for fishing openings; they are curious and wonder what we are doing here. A seal was spotted by marine biologists. They first checked to see if it was already electronically marked ( with an RFID device) before immobilising it  and tagging it under the skin to how territorial they are.  Like penguins, seals are not afraid of humans. 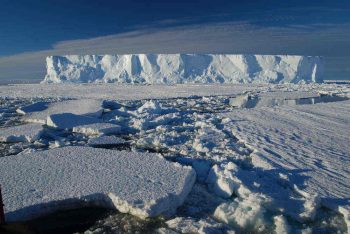 Having sea-ice at this time a year is like having snow in July in Belgium. Sea-ice does not melt away but is broken apart by waves and higher tides created by storms. The wind then blows the fragments away in a matter of days, sometimes even overnight. This has not happened this year, it may still occur but the cold season will kick in again in a few weeks and that will stabilise the crust for the rest of the year.

It explains the ‘zero year’ for penguins. Even if some Adélie chicks are still alive – I saw a few that seem in good health – ornithologists tell me they will not survive as they cannot walk to the open sea which is about 80 km away. All Emperor penguins have now left, the few chicks that survived will not make it either. Yesterday I saw three, from very close, they seemed lost. Today I found two dead ones on the ice only 2 km from the shore. 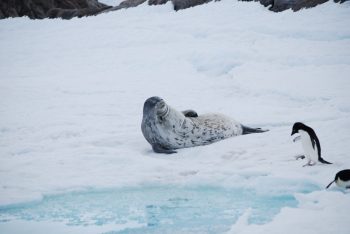 Other consequences of the unusual weather is that up to now the diving team could not recover devices left on the sea bottom a few years ago for marine biologists. I did watch a dive to repair a tide gauge. To dive here you need the water to be ice-free or hard ice to drill through to enter. A small ‘sea truck’ boat could also be used either for marine sampling along the shore. I accompanied a group using traps and standard fishing techniques instead.

On another day we also did ice-shelf coring to sample zooplankton and algae. They study the food chain through natural stable isotopes measurements.

The nice weather here is beneficial for outside construction work. Life in and outside Dumont d’Urville is buzzing like a beehive as most activities can only be done between October and February: it is a race against time. I discover new aspects of life in Antarctica on a daily basis.