Settling in at Dumont d’Urville 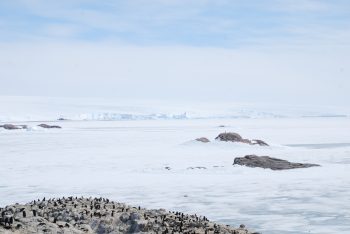 Didier Schmitt is a member of the space Task Force at the European External Action Service. He is a regular opinion writer in major newspapers and magazines and has published a book on foresight. He will be contributing to this blog during his visit to Concordia – we join him as he has returned to the coastal station Dumont d’Urville:

At lunch and dinner breaks colleagues want to know how it was on the Raid and at Concordia. It is difficult to translate such an adventure into words. Only one or two rookies can do a Raid each year. I am still astonished to have been able to achieve this. 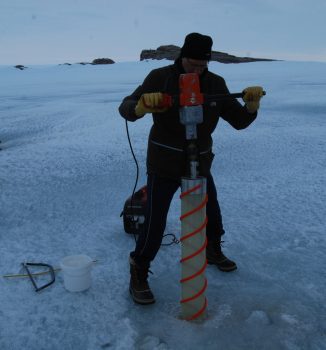 The Astrolabe ship has arrived, although not at shore as it would normally at this time of year. It is stuck 80 km from shore anchored to sea-ice so helicopters can land safely. The ballet has started; one take-off and landing every hour for each of the two choppers. First the passengers, then cargo: one tonne per rotation. The ice has been tested in-between Dumont d’Urville and the ship using a helicopter that drops a person with drilling hardware onto the ice. To gain time and for the boat to leave as soon as possible, heavy, non-critical loads are left midway on the one-meter thick ice-sheet. They will be flown back once the boat has gone. Weather conditions can change quickly so air transport can be stranded for days and even weeks. Christmas gifts and long-awaited letters have just arrived, they had been stuck in customs back in Australia.

Unloading 250 tonnes of fuel and other supplies for Concordia by helicopter at Dumont d’Urville will become very challenging and expensive if this exceptional sea-ice stays. Next year’s planning may well need to open up another route for the Raid, leaving from the Australian Casey station to Concordia. In addition, a more daring raid is planned in 2019 or 2020, a science expedition from Concordia to Amundsen-Scott South Pole station!

While France and Belgium experience cold and snow, we are living with positive temperatures during the day, up to +5°C! It is very unusual to see snow melting here, especially at this period of Antarctic Summer. Yet another sign of an unstable climate era ahead. 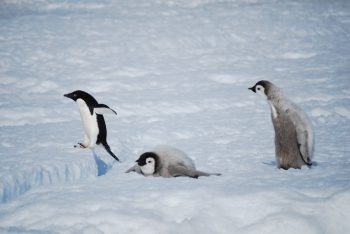 Here is the dark side to all of this: most Adélie penguins have lost their chicks. In November an uncommon snowfall followed by sunny conditions washed away half of their eggs. For the ones that hatched, life has been miserable since. Due to the extended ice sheet that has not been broken by a storm yet, the adults spend too much time walking to a rare opening to catch enough fish. I have only seen a handful baby birds alive in the thousand nests around here.

Although the Skua predator birds profit with a feast for them, they will be in trouble soon as no chicks will remain to finish feeding the Skua’s own off-springs. The situation is similar for the Emperors penguins  a couple of miles away. Nearly all chicks have died as well since I left and the ones who survived have few chances to make it to the open sea… life can be really harsh here.

Not a good year to be an ornithologist! However, they appreciate the possibility to have access to satellite images to compare their GPS-equipped birds with ice cracks seen from space.

In the next blog entries I will detail what the other scientists are doing in and around Dumont d’Urville.