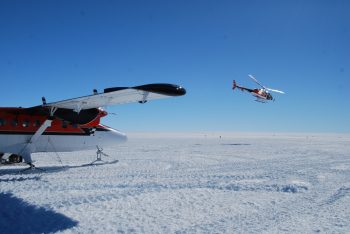 Didier Schmitt is a member of the space Task Force at the European External Action Service. He is a regular opinion writer in major newspapers and magazines and has published a book on foresight. He will be contributing to this blog during his visit to Concordia – we join him as he leaves the station to return to the coast:

The Twin Otter plane we took from Concordia flies-in to Antarctica every year from Canada for the four-month summer season. The pilots are among the most experienced crew on the whole continent. As you can guess the view was fantastic. The pilots decided skip the intermediate refuelling because of favourable tailwind.

Four hours later we landed above Prud’homme station with an amazing view on the icebergs sticking out of the sea-ice, which extends as far as one can see. Another great view came right after when picked up by a helicopter to reach Dumont d’Urville station.

I am being hosted by the head of the district who volunteered to share his room. I am in a suspended flip-over bed, but what a sight on the Astrolabe glacier! 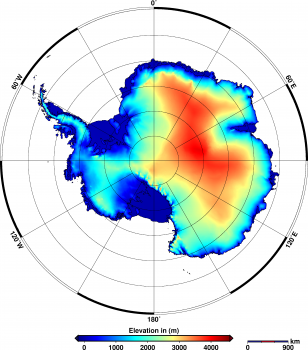 Antarctica’s land surface is much wider than all the European Union’s member States put together. During the southern winter the sea ice-sheet doubles the surface. The ocean (by definition above 60 degrees south) and mainland are ruled by the Antarctic Treaty and follow-up protocols which make it an “open sky laboratory” – similar to the outer-space treaty. Like ESA does for the International Space Station, the polar institutes IPEV and PNRA provide infrastructures, including transport, for research.

This continent should indeed remain a sanctuary. Setting foot on Antarctica is possible for wealthy tourists – Antarctica receives around 40 000 a year – who arrive by cruise ships at the other end of the continent near the Chilean and Argentinian southern tips. There are pros and cons for tourism, but only if the continent remains untouched can it maintain its peculiarity as a territory dedicated to peaceful and scientific activities.

In total 7000 scientists and support staff work each year on the White Continent. Studies are ever more imperative – even under such harsh conditions – as climate change touches also this remote region. Rich sea-life and meagre land-life has evolved in a stable environment over million years that has become dependent on a delicate balance which is sensitive to minute changes.

After having moved across the hemisphere, sailed the Antarctic Ocean, crossed a significant part of Antarctica and lived with hypoxia at well over 3000 m altitude, my marathon comes to a rest. 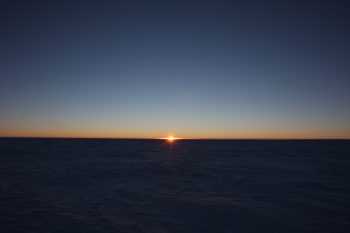 As a consequence I am catching up on sleep…  At Concordia the sun remains high on the horizon at night, while at Dumont d’Urville station the first day of sunset happened on December 5 at 0:24 and sunrise was at 1:17… The change is quick, as by end January the sun will already disappear over 5 hours.

The base is very active in summer – we are about 80 now – for logistics and for science in a 50-50 ratio. It is actually a race against time before the summer crew will leave.