Flying over the ice

Didier Schmitt is a member of the space Task Force at the European External Action Service. He is a regular opinion writer in major newspapers and magazines and has published a book on foresight. He will be contributing to this blog during his visit to Concordia – this entry was sent from the Dumont D’Urville base:

Yesterday we were stuck in moving ice-sheets (pack-ice). Satellite images and helicopter-scouting was used to find our way out but after 18 hours forcing through the ice we gave up. A 100 km thick sea-ice separates us from our port of call so we left the ship by helicopter. It was a breath-taking experience. Our equipment will need over 50 more helicopter rotations. Future human space missions must also be able to deal with the unforeseen. 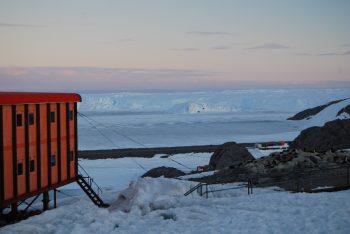 Sustaining teams that stay in Antartica all winter to collect data is essential to improve our understanding of climate change and marine life. From a human and logistics point of view it is not an easy task: the harsh environment prevents any rescue during nine months a year. It is similar to an International Space Station mission or future Mars missions. Working in Antarctica is similar in other ways to space as an institue (in this case the Institut polaire français Paul-Emile Victor) provides the means for scientific communities to research their disciplines – like ESA is doing for the International Space Station.

Contrary to the Arctic, Antarctica is not much in the news but it deserves more attention as a scientific safe-haven. Earlier this year ESA and the European Polar Board signed a Memorandum of Understanding. The door is open and there is room for common research and development at European level. The Dumont D’Urville base is already used for calibration of atomic clocks for the global navigation system.

The very first encounter with local wildlife was with penguins and seals, first at sea and then at shore, but there is not much time to take in the sites: we must prepare the Raid convoy. A unique feature in Antarctica.