The Analemma in Antarctica

Last year’s ESA-sponsored medical doctor at Concordia has been working on his videos and shared this project of charting the Sun over his year-stay in Antarctica:

Wouldn’t it be interesting to keep a log of your location at exactly 16:00 every week? Let’s do that on Mondays: imagine drawing a dot on a map to indicate your position at the same time every week. At the end of a calendar year you would pick up the map and most Mondays at 16:00 you would probably be at the same place – at work! But there would most likely be some deviation. Perhaps one Monday at 16:00 sharp you were at the office next door or you had to get up from your chair and cross the corridor to answer the door. Maybe one Monday you left early, so your location indicator showed you at home or maybe you took a free day, so your dot on the map was far away, at the the nearest beach. How would it look, that graph of your exact position at 16:00 every Monday for a whole year? 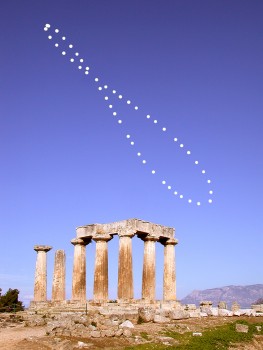 Well, you can do this with a star to answer that the same question: our Sun! As seen from the surface of the Earth, the position of the Sun in the sky changes with seasons. The reason for this is that our planet’s rotational axis has a 23˚ inclination with relation to the ecliptic (the plane on which all planets revolve around the Sun) plus the Earth’s orbit around the Sun is an ellipse, not a circle. This means that at exactly the same time, the Sun will be at a slightly different place in the sky next Monday as compared to this Monday. A snapshot of the Sun’s positions at the same moment over a whole year is called an “analemma”. Now the difference between an analemma and your own “graph of location at 16:00 on Mondays” is that the Sun is far more predictable! It follows the same path in the sky with no deviation year after year. This pattern looks like a figure of 8, only it is tilted and one of its lobes appears larger than the other. You can have a look at analemma pictures here and here.

What does change though is how you see the analemma – and that depends solely on your geographic latitude: A yearly analemma over Athens is slightly different compared to an analemma over Paris or Rome even if taken at the same time of day. The main change is how much the figure-8 shape tilts and how high above the horizon the analemma appears. So how would it look from, say, Sydney? Well, about the same as from Athens, since their latitudes are almost opposite. But how would it look from an extremity such as the North or South Pole? 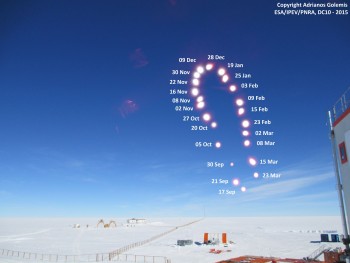 Having spent a whole year at Concordia research station in Antarctica, and since my location at 16:00 every Monday during my stay would hardly change, I decided to step up to the challenge of documenting the analemma. To achieve that, I took a photo of the Sun with a special filter at the exact same time every week and from the exact same spot outside the station which was particularly challenging with the winds and low temperatures outside. Still, the result was rewarding as to my knowledge it is the first-ever capture of the analemma from within the Antarctic Circle. As you can see, near the poles only one lobe of the analemma is visible (at Concordia we experience a 3-month-long polar night where the Sun disappears completely from view) and the shape is almost vertical.

Wait… one last question: how would an analemma look like from the surface of another planet, for example Mars? Well have a look: https://apod.nasa.gov/apod/ap061230.html !

Our solar system is full of marvels. ҉ 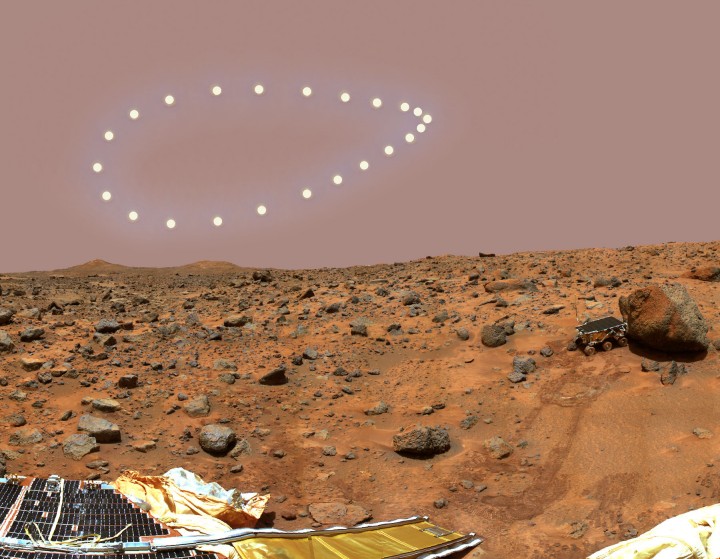