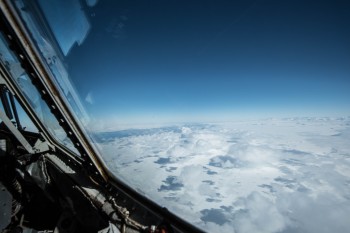 ESA-sponsored medical doctor Beth Healey recounts her summer in Antarctica getting ready for four months of experiments and isolation in Concordia:

First impressions:
As we flew away from the coast and deep onto the icy plateau of Dome Charlie I was struck by it’s vastness, as a stretching expanse of white nothingness merged with the curve of the horizon. After many hours of relentlessly battling with a continual buildup of icy vapour from the interior of my window, I began to make out the faint outline of Concordia Station which had become so familiar through pictures during weeks of preparatory lectures. Others scrambled to catch a glimpse but quickly we descended onto the ice runway and the doors to the aircraft swung open with an icy blast followed by a goggled figure with a frosted beard who climbed onboard to greet us.

I was welcomed to the base by the previous overwinter crew and my predecessor, ESA medical doctor, Adrianos Golemis. The team were friendly and it was interesting to learn about the experiences and challenges they had faced. It was strange to be standing with this crew, they felt so far away only a few weeks before during a skype call at the European Astronaut Centre. 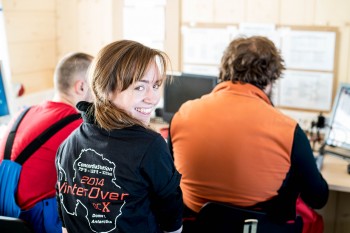 It took many weeks for me to acclimatize to the 3200 m altitude, subzero temperatures, eight-hour time difference and 24 hour daylight we experience during the ‘summer’ months. For the first week I found sleeping difficult as the dry air cut through me requiring a continual supply of water and moisturiser to keep hydrated. Even scaling the shortest flight of stairs would leave me gasping for breath and anything over a walk was near impossible. I visited the gym and after about six minutes at my normal settings I collapsed in a heap, learning the hard way that you have to adjust your exertion to accommodate for the reduction of oxygen we experience here!

PNRA, IPEV and ESA work collaboratively to complete a ‘Long-term medical survey’ (LTMS) of the overwinter crews. An element of this considers our initial acclimatization phase and in the context of other markers we use the internationally recognized ‘Lake Louise’ questionnaire to help measure this. The Lake Louise questionnaire considers both subjective and clinical signs of a range of variables. Fortunately everyone from our flight acclimatised without difficulty and did not require the more invasive medical facilities available on base to assist if any problems were to occur. Examples of these include a Gammow bag which can artificially increase the atmospheric pressure for a short period, medications such as Diamox and, for more serious cases, an aeromedical evacuation back to sea level.

Dr Golemis kindly introduced me to the ESA lab and advised me on his experiences as well as explaining the other tasks expected of me in addition to my primary role of conducting the ESA research. These included water analysis, coordinating the LTMS survey, assisting the clinical doctor, educational outreach and communal tasks. 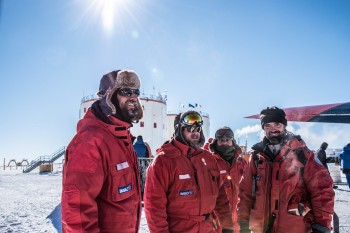 Starting the summer experiments:
We had two of the ESA protocols running over the summer period. These included ‘COALA’ which was continued from the previous year and a new experiment from a team in Milan, ‘Porcelli’.

COALA: Coala is a video diary which all winter crew are invited to complete on a weekly basis. The software analyses body language and speech. It considers the frequency of certain words for example when a subject uses team words as opposed to individual words and how the use of these may change over time and with stress. It is hoped that this data will help to develop computer systems which will be able to interpret body language and speech of astronauts to monitor their emotional and functional status during spaceflight.

Porcelli: The Porcelli experiment considered chronic adaptation to hypoxia (low oxygen levels). To do this blood tests were taken at before departure and at days 3, 7, 20, 90 after arrival and are to be repeated at the end of the winter period and on return to Europe. This research is important to ESA as spaceships have a lower atmospheric pressure due to engineering constraints. This research also has many wider clinical applications for example in intensive care.

All of the crew kindly agreed to participate in both of these studies and I was pleased with the data we managed to collect during this period. 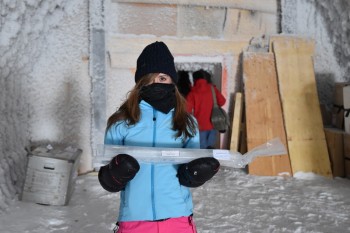 ESA Open Day:
In addition to the overwinter crew there are many personnel who stay only in Concordia only for the summer period. These teams work on projects such as the famous EPICA Ice Core drilling or base maintenance which is only practical to work on during the warmer summer climate. This means there is a constantly rotating summer crew reaching a maximum of 80 people at any one time. To accommodate these extra crew we have a summer camp and additional heated tents located a short walk from the main base.

During the summer it is customary for the scientific teams to give a short evening presentation for those interested about their research and the work they are doing here.

In this spirit I organized in collaboration with Dr Golemis an ESA open day. We had lots of fun preparing an ESA cake, teaching the crew some basic clinical skills (for example venipuncture and suturing) and giving presentation explaining our role and aims here.

Christmas & Christmas movie:
It was the week before Christmas and all through the base not a creature was stirring except for…

Nicola making a traditional Italian Limencello, Grazia working on a fabulous Christmas cake and the chefs Luca and Giorgio preparing an unforgettable Christmas feast! Meanwhile I directed a Christmas movie which we sent to friends and family wishing Christmas greetings.

The food we ate was different to the traditional English Christmas I am accustomed to I certainly had never started with escargots & fois gras before! It was great to combine so many different cultures to produce an eclectic mix of Christmas traditions which accommodated everyone and which we all enjoyed. The station leader also awarded us a certificate for passing over the Antarctic Polar Circle and Grazia presented me with a beautiful small penguin she had kindly made for all the girls on base.

This was greedily my second Christmas, after already celebrating an ‘early Christmas’ at home. This Healey family tradition is organised if any family member is due to be away. Last time it was called upon was in honor of an on call hospital shift, so for me this was definitely an improvement on that! At this time I was also interviewed for a Guardian Christmas Podcast which spoke to scientists working away from home and in interesting places around the world for Christmas. It was great to hear how science had led so many people to so many unusual places to celebrate this special day! Unlike most, we were certainly able guarantee a white Christmas here!

The traverse:
Santa arrived late with my Christmas presents which travelled 1300km over the Antarctic plateau from the Antarctic coast. Eight Caterpillar tractors and a remarkable team of 10 hauled the food and fuel we required to keep the base functioning. As this spectacular feat became visible over the horizon we raced out to great them on skidoos and travelled back in convoy with much celebration.

New Years Eve:
It was lovely to have the traverse team around to welcome in the New Year. Like at Christmas we enjoyed another fantastic meal and spent the rest of the night dancing. It was strange to welcome midnight in bright sunlight!

As we waved goodbye to the traverse we also said hello to the remaining DCXI overwinter crew who arrived to complete our team by Twin Otter plane the same day.

It is never too cold for basketball. Credits: ESA/IPEV/PNRA-B. Healey

Sport:
We made the most of the summer climate and stayed fit by enjoyed cycling around base, rugby matches, basketball and volleyball. The rugby was taken especially seriously with National Anthems sung before the Italians took on the French and national coverage of the match in Italy!

Other science:
In my spare time I also enjoyed learning about the different scientific projects which were being conducted on base here. This led to my involvement in snow sampling several kilometers away in untouched wilderness, releasing a weather balloon and drilling my own ice core (with much assistance!). It was interesting to learn about and be involved in all of the different projects here in addition to our own aims at ESA.

Final traverse & arrival of ESA equipment:
The final traverse was critical as it transported the remaining fuel essential to keep the station running for the winter period. Temperatures are predicted to reach as low as -80°C so it was a tense moment as we awaited the remaining fuel tanks coming into view over the horizon! We also enjoyed welcomed back some of the traverse crew and met some new members of the team. Also on board was the head of the IPEV medical team Paul La Foret and I had the pleasure of showing him the ESA operation at Concordia. As a team we formed lines to help to unload the endless containers of food. I was also excited to see all of the remaining ESA equipment arrive and spent the following days battling to see the floor of my lab again as I unloaded the endless Zarge boxes!!

Final farewells
It was an emotional time to say farewell to the summer crew to whom many of us had become close and shared some good times together. The final party was hosted in the EPICA workshop. An oil fire heated the cozy weather haven tent which had become a favorite place of mine to warm up over the summer. Although sad to say farewell to new friends it was also an exciting time as marked the start of the next phase of our experience here…