ESA-sponsored medical doctor living in Concordia base in Antarctica sends this update on long-distance relationships, talking with ESA astronaut Alexander Gerst and the importance of sharing:

Alex McCandless (also known as “Supertramp”) had once written that happiness is only real when shared. Sharing is important for other feelings, ideas and visions too. Ain’t that right?

These days our DC10 expedition has almost com 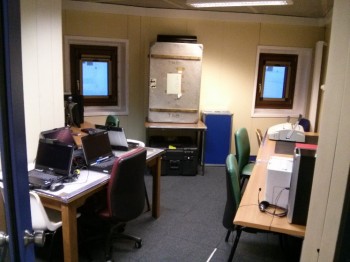 The internet room, a bridge to the world. Credits: ESA/IPEV/ENEA-A. Golemis

pleted 365(.25) days in the white desert. Amazing – it is one thing to expect it and another thing to reach this milestone. Sometimes time seemed to pass too quickly, partly because of sharing my impressions with the rest of the world. Sharing the great moments among the crew and with our loved ones or discussing hard times with friends inside and outside the Station, one year in isolation can weaken some relations but strengthen others. It is like a trial – which relationships can survive under extreme conditions? Distance and inaccessibility are not always show-stoppers. At least not when there is a visible end, light on the other side of a year-long tunnel.

Thanks to technology you can partially make up for not being with your friends, family or partner. Yes we have missed a few weddings, births, funerals – not to mention birthdays and name days (which are as important as birthdays in Greece). But hopefully sharing our own unique moments at Concordia can act as a counterbalance.

Can you keep friendship alive while at remote Concordia? Sure, if you keep in touch every now and then. It depends on the other person too. But I am happy that my bond with two to three close friends was actually reinforced during my stay in isolation. The same goes for my family.

Can you maintain a relationship with your partner from Antarctica? Sure, if you try a bit. And if it is a mutual decision. In this case, living in separate worlds plays a more significant role. You must restrain yourself to telephone calls and occasional videoconferences. You will share no common experiences for a year. Even calling can be difficult due to the inconvenient 6 or 7-hour time difference with Europe. But pairs have survived in worse conditions such as in times of war. In the end it is a matter of dedication and determination. To keep a relationship alive, to give and receive the fundamental things in life, is as Billie sang:

{Edit: A couple of weeks after this text was written I received a package sent by my girlfriend, Judith, one year ago. It was a collection of cards, letters and gifts from many of my friends. A surprise to keep me company in the winter. This marvelous little package was stuck in another Antarctic Station near the coast for approximately one year. It only reached me at the end of the winterover. However, it still made me smile countless times and feel an inner warmth as I read messages and opened presents from France, Malaysia, USA, Greece, Italy, El Salvador, Ireland, Spain, Serbia, Russia, the UK, Canada, Australia, China, Finland, Germany, Brazil and other places. Almost like a time capsule – thoughts, wishes and gifts prepared in November 2013 and opened one year later. I am greatly thankful to my girlfriend and my family for this idea that made my day. Astronauts do the same when in long-term space missions – they bring up artifacts and letters prepared by people close to them and open one at a time for as long as the mission lasts. Speaking of astronauts…} 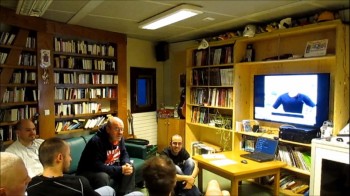 Calling space – Alex’s face on the screen can unfortunately not be seen. But judging from the position of his arms you can maybe tell that he floats in 0g! Credits: ESA/IPEV/ENEA-A. Golemis

A few weeks ago we had the great pleasure to enjoy a live connection with… space. ESA astronaut Alexander Gerst held a videoconference with us at Concordia, with the kind support of NASA and ESA. For many of us it was a unique experience and a dream come true. We discussed life in space and life in Antarctica and isolation in general. Alex had done his own share of living in Antarctica before being selected as an astronaut. Coincidentally, I had met him during his training for this Blue Dot mission in Star City, near Moscow, Russia. That was on an educational trip with the International Space University and at that moment I didn’t expect to talk with him during his stay in space. Then again, I didn’t expect to spend the next year at Concordia! 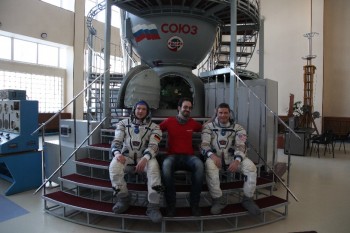 Coincidental meeting with Alex and NASA’s Reid Wiseman in Star City about 2 years ago. Credits: A. Golemis

Alex sharing his experiences with us was something special. We sent him some photos of our Station and the Auroras above it, hoping to kindle some nice memories on his side and to make his day exceptional as well. Sharing experiences is of great importance in the space sector – it motivates young people to pursue scientific careers and explains the significance of space research and technology development in a time that this is not easily understood. Few people think for example that it is space technology which gave birth to the hospital MRI scans or that without satellites the GPS on their phone cannot function. Even fewer consider that every Euro invested in space has a reported return of 1.4. Remember that astronauts do many medical experiments in space to provide solutions for pathologies on Earth. A bit like what we do at Concordia. And we need to share all these facts at a greater scale.

Outreach is vital – and often underestimated. This summer I was very happy to participate in a Greek “space art” competition for children and teenagers in Greece. If you‘re interested in the works, you can have a look at the link below. Some of them are truly captivating.

If you like science, space, art, actually whatever you are passionate about, share it! The effect of your ideas and feelings is multiplied when you share. And with them, share a smile. Sometimes there’s nothing more important that than, as you can learn in a winterover.

This blog entry is heartily dedicated to all of you. All of you who follow this adventure and with whom I am happy to share a few unique moments of our life. Thank you – and looking forward to hearing back from you. ҉