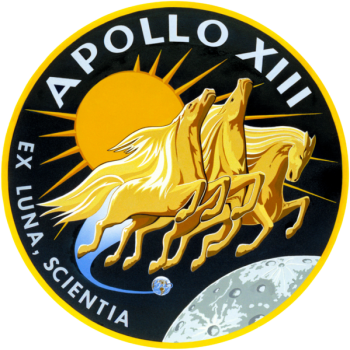 Greetings from the crew of Concordia Station, Dome Circe, Antarctica. Here the autumn equinox has passed and we are in anticipation of the long, dark winter.

Today’s title is a reference to the mission insignia of the Apollo 13 Moon-bound mission. Apollo 13 was one of the most desperate moments in mankind’s struggle to reach the stars, as an accident resulting from a mechanical failure threatened the lives of the crew. The imminent catastrophe could well mean a huge deceleration of the US space program, if some of the first Americans in space were lost. But quite on the contrary, through ingenuity, united effort and wits, the Apollo 13 crew returned safely to the Earth and the mission itself eventually turned into NASA’s finest hour.

Had the three astronauts reached Earth’s lonely satellite they would have done so for science. That is what the Latin motto of Apollo 13 emblem reads: Ex Luna, Scientiae, “out of the Moon, knowledge”

In our quest for knowledge, we humans have traversed far and survived in many unhospitable places. One of these is Concordia and it lies deep in the heart of the Antarctic continent, now threatened more and more from the effects of the global warming, but still an unwelcome place to humans. The knowledge that we extract from the mysteries that lay hidden in the ice, in the air, in the sky, and within ourselves give us the power to improve life on Earth and on other worlds in the future. Coming back to Apollo 13’s similar goals, here’s the soundtrack from the movie, one of the most inspiring films I have seen:

The secrets of our universe, our origin and our future are buried deep in the most improbable of locations – but, they can be revealed. With patience, effort, ingenuity and craftsmanship, feats that humans display in abundance when united and not fighting each other, we unveil that which is concealed and little by little, piece by piece, we complete our puzzle of awareness.

Our inborn curiosity drives us to challenge the odds and stray further, always keen to explore, constantly searching for more. It is our instinct to pierce the veil of the unknown, looking further, delving deeper. And to achieve that, the weapon in our hand is called Science.

Indeed Science is the very reason that our tiny human shelter of Concordia exists amidst the eternal realm of ice. To paraphrase Apollo 13’s motto, ours could easily be “Ex Frigore, Scientia”, knowledge out of the frost.

Having our metabolism checked. This picture always reminds me of the astronauts in hibernation in the film 2001: A Space Odyssey. Credits: ESA/IPEV/PNRA-A. Golemis

In many aspects, Antarctica has a multitude of secrets to offer to our craving for understanding. This is the very reason that many nations maintain a year-long presence in the challenging conditions of Earth’s seventh continent. In our case, Astronomers, Glaciologists, Meteorologists and Scientists of the Atmosphere reside at Dome Circe, constantly gathering new data and analysing them, hoping to be guided towards new marvels and decipher the mysteries of our world. My own responsibility as the European Space Agency’s research Medical Doctor is to study the behaviour and adaptation of humans to the adverse conditions of this tiny habitat in Antarctica, where altitude, hypoxia and dryness affect sleep and physical activity, and where permanent sunlight or night time confuse our circadian rhythms and play tricks on psychology.

There are 10 experiments being carried out this year. One of them, monitors our nutrition and metabolism, as we live at a high altitude it affects the amount of energy we spend on each activity. For this reason, once a month we test our metabolic needs – it is a rather pleasant one as all you have to do is relax with your eyes closed under a canopy measuring the air you breathe in and out (Picture #49). Other experiments check how our vascular pressure and bodily posture might be affected by the conditions of the strange environment we live in and another one is about our sleep

Our sleep is disturbed here by the dryness of the place (sometimes the humidity is lower than in a desert and you wake up with a very dry mouth), the lack of oxygen due to high altitude and the abnormal day-night cycle during the summer and winter. All of these parameters plus a few others, like the temperature of our limbs when lying to bed, are recorded for later analysis. On top of that, we sleep six times a year wearing special equipment including EEG (electroencephalogram) electrodes and so on.

All this research is of great interest to the European Space Agency, as it accurately simulates how humans can adapt to the difficult living conditions of long-term space missions. But mainly, all the benefits of the experiments conducted at Concordia will return eventually back to society, on the Earth. For instance, by understanding how to deal with sleep problems such as apnoea here in Antarctica, we can help patients with obstructive apnoea back in Europe.

One experiment aspires to discover which are the best antibacterial materials to use in a closed and isolated construction, be it an Antarctic Station or a spaceship.The purpose here is to reduce risks of cross-contamination of the crew. Once the best material for this is known, it can then be used also in infirmaries to avoid hospital-acquired infections.