Concordia veteran and ESA-sponsored medical doctor Eoin Macdonald-Nethercott spent over a year in Antarctica. He returned to the United Kingdom in 2011 where he now works as accident and Emergency Speciality Doctor. He is still editing pictures from his stay on the white continent and sharing them publicly. This post follows on from Eoin’s -60°C photography tips : 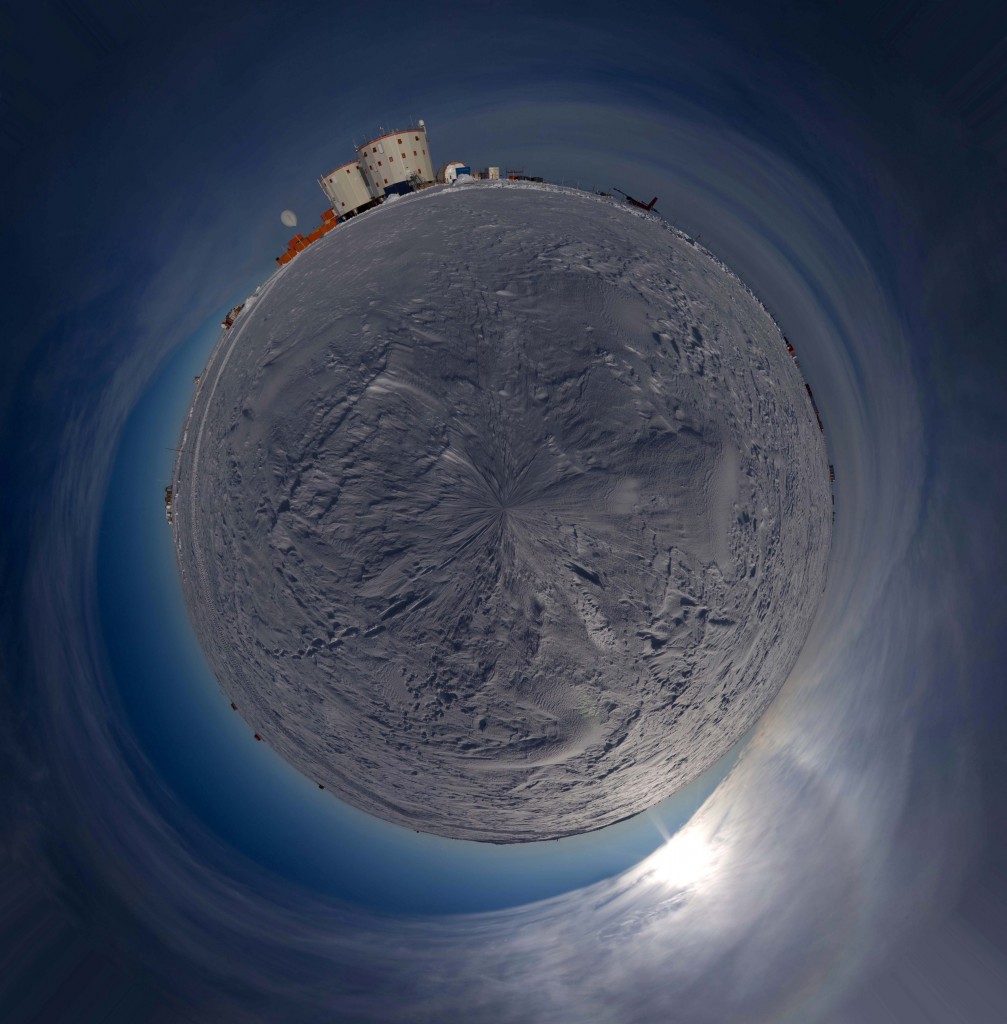 The story to the Concordia World is quite a long one.

I found the job offer for Concordia online, I applied for it straight away, and was offered an interview in a mad 12-hour period between on-calls at the hospital.

When I went looking for information on Concordia in preparation for my interview, one of the first sites I found was Gillaume Dargaud’s huge site, recounting his Antarctica experiences, including the the first winterover at Concordia. Dargaud is a wonderfully inventive photographer.   I had only ever used snapshot cameras but it made me think that if I took a good camera it might be fun in my time off learning how to use it.

This is my all-time favourite of all his photos, from his website:

It took several failed attempts to create one, as it take a bit of experience make it work, you need the sky to be perfectly clear or the images don’t stitch together, you want it to be closest to midsummer’s day so the Sun stays high and the snow does not change colour at midnight, and of course it’s not much fun being up every hour for 24 hours to take the picture, so you only get one chance every week on Sunday, and even then only if there is not something sociable going on.

I got closest to completing it in December but got interrupted when one of the summer crew fractured their ankle.  The next chance I got was in Feb, but by then the sun was getting close to the horizon and the snow colour changed, so it didn’t work out as I wanted, and the best I could do was use twelve photos .

Here’s the best I got that year:

The next summer, unexpectedly still stuck at Concordia waiting for my replacement Alexander Kumar to arrive, I was feeling a lot less sociable unfortunately, as I was tired, disappointed and feeling guilty to have let my family down a bit.  I had a lot less work to do so I tried several times to get a 24 h Sun panorama again.  But this year was struck by bad (warm) weather, and clouds constantly appeared, disappeared and reappeared again.  I remember being amazed one day to step out of the station and see low clouds shrouding the antennae of the station. It was only -18 and even before I stepped out I knew something strange was happening because I could feel the extra humidity – my mouth wasn’t as dry as usual.

Anyway, I have quite a few collections from that time of 6, or 10 hours-worth of photos that then got abandoned as clouds hid the sun.  Sometimes, as part of the process of setting up, just to check out the tripod was still level, the settings on the camera were correct, and to be honest, just to try and make a photo that was worth keeping, I would do a quick 360 panorama.   I kept one, because I quite liked the shadowy halo behind the clouds and the curves of the clouds.   The clouds of course weren’t like that, but a straight sided sheet, but that’s how the image ends up when you make a 360 degree panorama.

In January 2012 I left Concordia on the Raid and never thought about the picture again.

Then a couple of weeks ago, I visited my old college at Cambridge, Wolfson College, which is a lovely, green peaceful place. On the walls they had some pictures of the college in this ‘little world’ style, and I thought I would try making a similar one out of some of my old panoramas.  I dug out a few panoramas, and when I did the Concordia World one I just about fell off my seat!  I really like how the bands of the clouds kind of suggest a magnetic field around the wee ‘world’

It turns out it’s quite easy to do in Photoshop Elements.

2) resize the image so that it’s as tall as it is wide. This hugely distorts the image, but it’s only temporary

and there you are!

PS: The secret to getting the proportions right is to have enough ground or snow underneath the horizon.  If there is too little, the ‘world’ will be very small.  If the original image doesn’t have enough, this is what to do:-  Before starting step one, do this:  resize the canvas (not the image) so you have space at top and bottom.  Then use clone stamp to replicate extra snow or ground beneath the photo. It looks obviously replicated, but don’t worry, when the polar distortion is applied it will disappear, as long as you make sure the colour matching is good. Crop the image to remove any white canvas left over.  Then do the transformation as above.