We may have been the last folk to see the Aurora in Antarctica, but when it came, it was unforgettable. 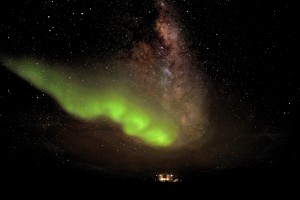 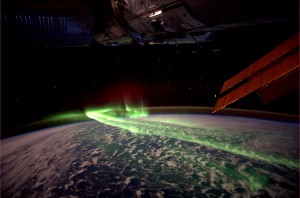 Aurora Australis: Over the Southern Lights between Antarctic and Australia seen from the ISS, March 2012. Credit: ESA/NASA/André Kuipers

A raw display of one of nature’s most incredible sights dazzled our crew.  The wind died down and life became still.  To me, it was if Heaven had opened its windows and a teardrop had fallen from high above our station, breaking the dark lonely polar night.

We managed to snap a few photos before Heaven realised its mistake and closed its doors.

I was left gasping in awe at the magnificent universe we live in.  For behind the trails of green left by the aurora, stood long and stern, the Milky Way Galaxy. It was simply the most wonderful sight I have ever seen and one I will never forget.

Looking at Concordia Station in the photo just makes you realise how small and insignificant we are, against the backdrop of the universe.

I leave you with the words I was reminded of in a poem by William Blake:

Father, O father! what do we here
In this land of unbelief and fear?
The Land of Dreams is better far,
Above the light of the morning star.

WILLIAM BLAKE, The Land of Dreams