The layers of Mars 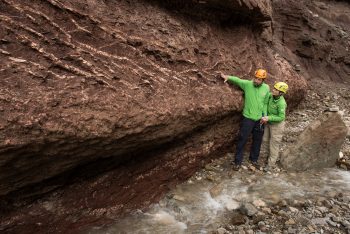 Just like on Mars, you can see layers of evaporites through fissures in the rock matrix. Credits: ESA – R. Shone

A new week, a new geological playground. A spectacular canyon lies in front of the participants of Pangaea, ESA’s geology training course, during the second week of the campaign in the Italian Dolomites region. The eight-km long and 400-m deep gorge contains around 10 billion tonnes of rock transported to the valley since the end of the glacial age, around 18 000 years ago.

The multi-coloured layers of rocks tell the million-year history of the Bletterbach canyon. These strata are the expression of deposits being eroded and carried away by ancient rivers. “You can easily see how the rocks cemented in layers of different types and colours,” says Pangaea scientific coordinator and instructor Matteo Massironi.

The gorge is the result of sedimentary processes quite similar to those found on Mars. “The area presents a unique scenario to teach martian geology, particularly because we can find veins of crystalised white gypsum – a rock-like mineral that tells us about an abundance of infiltrating water and what is left behind when it evaporates. This material has also been detected on Mars and points to water flow under the surface of the Red Planet,” says Matteo.

“We have a beautiful analogue for martian sedimentary processes right here on Earth,” says Peter Daldos, President of the GEOPARC Bletterbach. The region is part of the Dolomites UNESCO World Heritage. 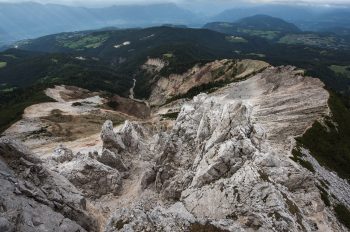 Canyon from above. Credits: ESA–R. Shone

The search for evidence of past life is of great relevance when exploring Mars. The layers of the Bletterbach canyon unravel footprints of prehistoric reptiles, but also secrets of animals and plants that lived millions of years ago. Many fossils can be found along the paths explored by the Pangaea crew.

“We are very proud of Pangaea taking place here. The explorers come into direct contact with the evolution of life on Earth and the Dolomites in particular. Since the first campaign in 2016 media interest is growing, and we get more and more journalists asking detailed questions about the story behind the rocks,” adds Peter.