The beauty of science 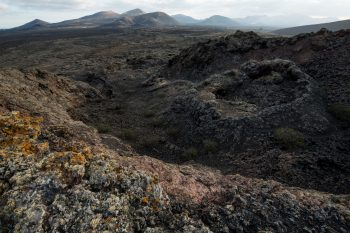 Here I am on a plane leaving the beautiful island of Lanzarote. Fields covered with majestic lava flows, volcanic cones peppering the landscape: some are dark black, others of different red tones, giving hints to their age, to their origin. The landscape speaks to me now, at least a little bit.

Together with my fellow Pangaea course participants Shahrzad, Hervé and Bill, I have practised reading the landscape: the layers, the volcanic processes, the hints of life.

Life, that would be the Holy Grail on Mars. Not only have we practised reading the geology to understand the history of a planet, but we have also learned how to find suitable habitats for life: discolorations of the original black basalt hint at prolonged water activity; porous rocks provide shelter from harmful radiation and temperature extremes; precipitations of hydrated minerals favour growth of microbes; sedimentary layers… 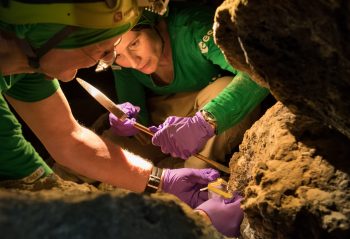 No, of course, not the latter. There are almost no sedimentary layers on the volcanic island of Lanzarote. That was the topic of the previous part of the Pangaea training, back in the Italian Dolomites.

It is an important topic, because Mars was not always the cold, arid desert it is today: the fluvial and lacustrine sedimentation layers we observe are a sign of the abundant water on the surface of the planet in its early stage of evolution.

But how about layers on comets? Comets obviously do not have lakes and rivers causing sediment deposition, nor are these bodies big enough to experience gravity-driven differentiation – that is what happens on planets like Earth or Mars, where heavier elements concentrate at the core, with lighter elements form the planetary crust. Given that, who would expect layers on a comet? 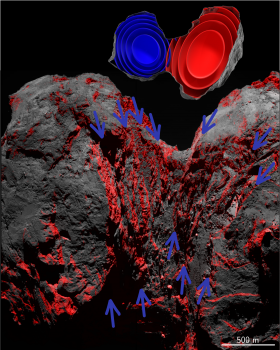 However, reality does often surpass imagination. On comet 67P, visited by the Rosetta probe back in 2014, a team of researchers, including geologists, identified layering!

The more reasonable explanation to this puzzling observation seems to be original accretion, meaning that the organised layers were formed as the comet grew bigger and bigger while orbiting in the protoplanetary nebula.

This interpretation opens up many questions, because current models of formation of our Solar System cannot explain it: for such a small body models predict a more chaotic accretion of rubble piles that experienced catastrophic collisions during the early evolution of the Solar System.

This is the beauty of science. The more we learn, the more questions arise. What we know is constantly put in question by what we discover and what we discover points to more things we don’t know. As human knowledge slowly expands, like a circle of light in the dark of ever increasing diameter, the border to the surrounding mystery only grows bigger. 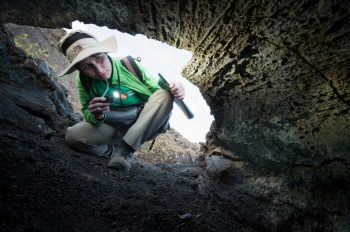 The volcanic heart of the rocks. Credits: ESA-R. Shone

If you want to learn more, check these publications co-authored by our Pangaea instructor Matteo Massironi of the University of Padova: