The space agencies of our planet are building new spaceships that will bring astronauts deeper into that vast sea of space that surrounds Earth. NASA’s Orion, the Russian Федерация and new Chinese and commercial capsules will open the way for planetary exploration. Our path will lead to Moon and on to Mars and allow us to extend the boundaries of our knowledge and technology.

But what has changed since the days of Apollo? What will we do and how will human explorers work on the surface of another planetor moon? These were questions that nobody at ESA could answer before we started the Pangaea training as Europe has never been involved in human exploration of other celestial bodies. Only NASA had acquired such knowledge: 50 year ago during the days of Apollo when being first was more important than doing the best science. NASA’s surface exploration expertise ended 14 December 1972 when the last Apollo mission lifted off from the Moon. The total number of moonwalks done so far is 16 with a total lunar exploration time of 80 hours 31 minutes and 37 seconds. Hardly enough to say “we’ve been there, done that.”

Technology has made huge progress since those early days and space agencies have gained significant operational experience with the International Space Station. So why not start from scratch with a fresh scientific-operational concept for work on the Moon or on Mars?  Pangaea got together some of the best geologists in Europe with ESA astronauts and operational experts and brought them to a unique region that resembles Moon or Mars as best as you can find on Earth: the island of Lanzarote.

The geologists introduced us to the scientific questions they need to solve and the strategy they apply for finding answers – how they work in the field, which tools they use, how to read and describe the landscape, how to find the best samples, which samples to take home, which samples to analyse locally with tools such as an infrared spectrometer or how water interaction influences and affects geology.

My astronaut colleagues and I introduced the geologists to the world of spaceflight operations, where mission time is limited by the amount of oxygen in the space suit, where manoeuvrability and visibility is hampered by spacesuits, where efficiency is achieved by a sound and clear plan and where astronauts conduct science strictly per procedure.

We all learned from each other during our first traverses in the moon-like landscapes of Lanzarote and quickly adopted the operational concept of “flex-planning”: starting the mission with a clear objective and an approximate plan but leaving room for flexible timing and best sample site selection. Such flex-planning resulted in the highest scientific efficiency during our traverses. Correct sample taking, location description and sample site-marking was practised and discussed. Boundaries between geological features that were easy to identify from satellite-images were impossible to find on the ground. We discovered the challenge of navigating a featureless terrain without satellite navigation systems. Each astronaut-explorer developed a clear role in the team, an evenly distributed workload and set of tasks to do, as well as a lean set of tools to carry. 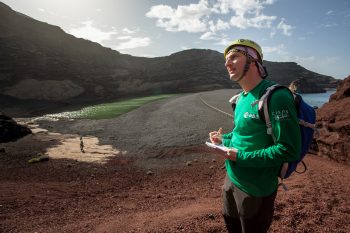 From other exploration analogues such as ESA CAVES and NASA’s NEEMO missions, it is evident that current operational concepts as used on the International Space Station will become unpractical for lack of communication or if the time delay between ground control and astronauts grows to several minutes (the distance to the moon delays communication signals up to 3 seconds, for Mars this delay can grow to 20 minutes). So astronauts will need more tools and expert knowledge to work more autonomously and take decisions which scientists on the ground usually take. To do so the explorers will have much more technical support than their Apollo predecessors: intelligent robots or autonomous rovers will one day carry tools for astronauts and even mobile laboratories. Small rovers or clusters of helpers will help scout and scan 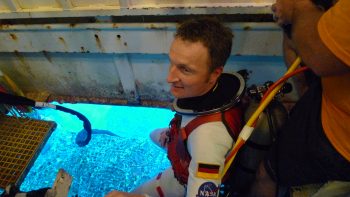 the area for interesting geological signals while simultaneously 3D-mapping the area for scientists on Earth. This data will continuously be streamed to the ground experts and despite a time delay they could provide expert opinion to astronauts on the surface. The astronauts helmet view will be downlinked to as well as  the audio. A different atmosphere or a lack of it results in unfamiliar lighting conditions on another planetary surface compared to Earth. Familiar geological features will shine with unexpected colours. To account for this, colour references need to be brought in.

Pangaea did not only achieve its geology training objectives towards us astronauts, it also helped the participating geologists to improve their way of working in the field and prepared them for future work with astronauts. The samples we collected are now being used for real and meaningful science. The flex-ops concept was developed for efficient science-driven exploration. We learned many lessons and will further improve our operational concept in future Pangaea missions.

Last but not least, Pangaea triggered many ideas for future surface explorations tools that could also find applications for Earth geology.

What more could we have hoped for?