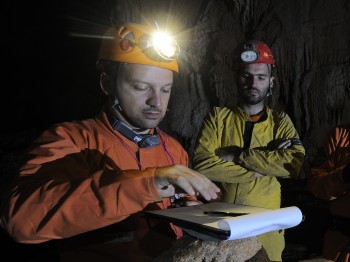 A main objective of CAVES 2014 was to test how operations concepts and tools used on the International Space Station adapt to extended cave exploration. Offering familiar protocols to astronauts could result in quicker adaptation to the new environment and more efficient operations in general.

We used an electronic timeline that is very similar to the On-Board Short Term Plan Viewer (OSTPV) used on the International Space Station. We used procedures consistent with the standard Operations Data Files (ODF), Big Picture Words (BPW) describing the basic science behind experiments, Stowage Notes and a number of additional flight-like provisions. In addition, communication between the crew and CAVES control was to be, as much as possible, in line with spaceflight standards.Two Daily Planning Conferences (DPCs) were scheduled at the beginning and at the end of the day and communication with the support team was encouraged despite the limited communication infrastructure.

How did it work? Let’s say that we learned a lot about the reality of speleological exploration and how well high-tech equipment fits into the picture…

A major problem was certainly infrastructure (or lack thereof). Caves lack more than amenities such as hygiene facilities, they are also extremely limited when it comes to communication assets. Only two communication links were available: a military-type telephone cable, running from CAVES control all the way to base camp with an extension reaching the critical Fourth Wind passage and a wireless underground-radio called TEDRA, which is rather complex to operate and is only used in specific conditions. This 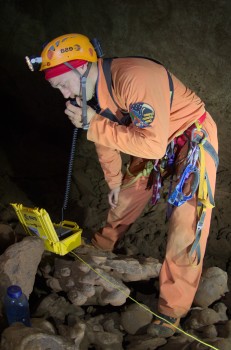 Using a TEDRA in the caves. Credits: ESA/V.Crobu

meant that no data connection was available and that pictures, science logs, survey data points, could only be transferred on USB sticks that were regularly shuttled back and forth by dedicated support personnel. This is a far cry from the nearly constant link between Mission Control Centres around the globe and the International Space Station, and heavily restricted the information flow between the underground team and CAVES control.

Eelectronic tools (rugged tablets and netbooks, and light-weight low-power servers) were selected to access ops products (timeline, procedures, stowage notes, etc.) and for data collection.Although adequate for the underground environment they proved to be too cumbersome for truly efficient operations. It turned out that pencil and waterproof paper, originally only carried along as a backup option, fit the environment much better: they are light, inexpensive and can be used any time without worrying about batteries, damage or dirty gloves. The drawback, of course, is that having information scattered across several pieces of paper, carried around by different people, makes data consolidation much more difficult.

In summary, what kind of operational lessons could be learned from CAVES 2014?

First and foremost, although ops products that are up to spaceflight standards are useful references, there is no need for everybody to have them available constantly in electronic format. In almost all cases, it is enough that only one or two members of the crew have a print-out in their rucksacks, ready if needed.

Secondly, data collection during exploration should be done – as much as possible – on paper, while data recording into a master file should be performed at a later stage, either by the crew at base camp or by specialists in CAVES control.

Last but not least, given the limited number of opportunities to communicate, crew and CAVES control should stick to structured and effective conversations. Especially during Daily Planning Conferences, all important points should be discussed according to a detailed checklist and, when information is missing – for instance, about the completion of certain activities – CAVES control should ask the crew for clarifications to understand the situation underground as best as possible.

Those lessons learned are currently under scrutiny and, once properly distilled and analysed, they will be part of the foundation for CAVES 2015 operations.