The claustrophobic underground world of caves and the vast emptiness of outer space: two environments not commonly associated to each other. Their physical and chemical characteristics are, indeed, so strikingly different to be almost antithetic. At a closer look, however, a fascinating similarity emerges: both worlds attract the curiosity of explorers and, in turn, the explorers of both worlds are bound to very similar operational constraints.

First and foremost, access to all but a handful of “easy” caves is difficult. There is certainly no need for anything as big and powerful as a rocket to enter the hollow depths of mountains. Nonetheless, speleologists have to rely on a fair amount of equipment and transition times, even to seemingly nearby locations, might take hours or even days, durations comparable, for instance, to the six hours necessary to reach the International Space Station.

Additionally, speleologists cannot live off the land: caves are almost lifeless environments and extended exploration involves well planned logistics to make sure that all food, power, data and equipment is available where and when necessary. In this respect, the complex choreography of cargo vehicles needed by the crew of the International Space Station to live and work in low Earth-orbit is not so dissimilar. 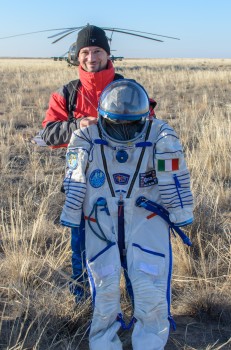 Interesting enough, there are even areas where typical constraints of the hypogeum are much harder than their “counterparts” for space. For one, communications to spacecraft in low Earth-orbit is nowadays possible without interruption and at (relatively) high speed. On the contrary, wireless communication from inside caves to the outside is slow, expensive and, in general, available only in very specific conditions: most of the time, speleologists are completely isolated from those (more tanned and less visually acute in darkness) walking on the surface.

The list of operational analogies between outer space and caves goes much further but this quick overview is probably enough to explain why a training program like CAVES stimulates the interest of a space operations geek such as myself.

In my job I take care, together with an amazing team of colleagues from the European Astronaut Centre, of the official space-to-ground communications between the Columbus Control Centre and the astronauts onboard the International Space Station, as well as support the European astronauts and their families pre-, in-, and post-flight.

The aspect that I find the most fascinating about my job and space operations in general is the fact that, although they are certainly about technology, their most important element is the organisational component, the challenge of creating a coherent picture out of a complex puzzle of diverse and often conflicting requirements.

This challenge is something that I will have the opportunity to face, in a novel and unusual framework, during this year’s edition of the CAVES astronaut training program. My task will be to apply my experience as spacecraft communicator, as well as what I learnt during a brief involvement with speleology a few years ago, to be the formal interface between the astronauts underground and “Mission Control” on the surface.

In this capacity, it is going to be interesting to interact with the “participants” (with some of whom I have already worked extensively during their space missions) and try to provide them with answers and support, while we are all exposed to conditions to which we are far from accustomed. I am also curious to see whether the exposure to limited communication coverage will allow to draw lessons potentially applicable to future space exploration missions. In any case, it is going to be a fascinating program and I am certainly looking forward to start!