AMT4OceanSatFlux: From the Doldrums to the South Atlantic Deep

Gavin Tilstone from the Plymouth Marine Laboratory details the next part of his voyage through the Atlantic – as part of the AMT4 OceanSatFlux project, supported by ESA.

From 4 to 9 November 2019, we passed over the equator and into the South Atlantic Gyre.

The equator is an eerie place; humid, silent with no wind. The clouds hang so low that they almost touch the sea. It is a low-pressure area where the prevailing winds are calm and rain can be heavy. This equatorial region is also known as the Doldrums. Ancient mariners found it very difficult to navigate through this area due to the lack of wind. It is part of the Inter-tropical Convergence Zone where the northeast and southwest trade winds converge forming an equatorial trough – where there is high evaporation and precipitation.

The equatorial trough push surface waters westwards, creating a pressure gradient to allow deeper richer waters to advect to the surface. With them they replenish the photic zone with nutrients causing jets of patch phytoplankton blooms. This is rich pickings for many marine fish and mammals. Both the nutrients and temperature in this region can vary greatly depending on the strength of the equatorial upwelling.

Spanish Scientist Cristina Fernandez, a PhD from the University of Vigo, who is aboard RRS Discovery is studying the effect of different nutrient and temperature regimes on the phytoplankton in this region. Under different global warming scenarios, this is to simulate how future warming and nutrient conditions may affect the phytoplankton, which is the base of the entire marine food web. This could have a knock-on effect through the food chain from the phytoplankton to fish and larger marine mammals.

Cristina is using an on deck incubator known as a ‘Planktotherm’, to vary both the temperature and nutrients available to the phytoplankton and to study their photosynthetic and growth response. The theory is that in a warming ocean, nutrients will become less abundant and so productivity will decrease which could have a knock-on effect higher up the food chain.

Cristina Fernandez from the University of Vigo analysing samples from the Planktotherm. (PML)

Sailing out of the narrow band of the Doldrums to 3 degrees south on 6 November, we abruptly encounter deep, blue, oligotrophic waters again. The mixed layer and phytoplankton biomass have deepened to 90 and 130 meters, respectively. We have, literally fallen over the line of the equator and into the South Atlantic Gyre.

On this vast slab of deep blue, the water is crystal clear. It is therefore easy to spot life on the surface. The lights from the ship at the pre-dawn cast lure a multitude of life upwards. Squid chase minnow like flying fish which in turn, attract hunting parties of Dorado, causing this flurry of life to scatter and dart back to deeper layers again.

The CTD cast reveals that there is less phytoplankton biomass. The main phytoplankton that live in this South Atlantic desert are the Cyanobacteria which are photosynthetic bacteria. These tiny organisms, measuring between 0.2 and 2 micro-meters, are one of the most successful group of microorganisms on earth and the most genetically diverse.

Cyanobacteria live in a broad range of habitats across all latitudes, are widespread in freshwater, marine and terrestrial ecosystems, and are found in the most extreme niches such as hot springs, salt works, and hypersaline bays. The ability of cyanobacteria to perform oxygenic photosynthesis is thought to have dramatically changed the climate and therefore the composition of life forms on Earth. Plants and eukaryotic algae all evolved from the Cyanobacteria.

The main species in these marine waters are Syneccococus and Prochloroccocus that can withstand extreme nutrient limitation. Syneccococus live in the upper layers and Prochloroccocus dominate the deep chlorophyll maximum. The sunlight is so intense at these latitudes that if these small phytoplankton are carried to the surface, they can explode due to the intensity of the visible and ultra violet light. They therefore reside at the deeper layers of the ocean, surviving on low light and re-mineralised nutrients.

Rebecca May from Plymouth Marine Laboratory is taking samples from the rosette to quantify the nutrients and oxygen in these regions. Glen Tarran, also from PML, measures the abundance of these small phytoplankton groups using flow cytometry, a technique more commonly applied in Medical Science to count blood cells. These vast blue deserts occupy 70% of the world’s oceans, and these tiny phytoplankton play an important role in maintaining the delicate food web that sustains life in these huge ocean ‘deserts’.

On average, the South Atlantic Gyre fixes 2.86Gt carbon per year. Some of the carbon fixed in the light zone is transported to the deep ocean. This process is known as the biological carbon pump; the mechanism through which organic matter that is formed during photosynthesis, is recycled and/or sinks through the water column. Phytoplankton, the marine green plants, not only provide food for the entire ocean, it also provides us with the oxygen that we breathe and locks up CO2 from the atmosphere – a proportion of which sinks to the deep sea floor as organic matter. These tiny organisms play a huge role in regulating the health of oceans and climate. 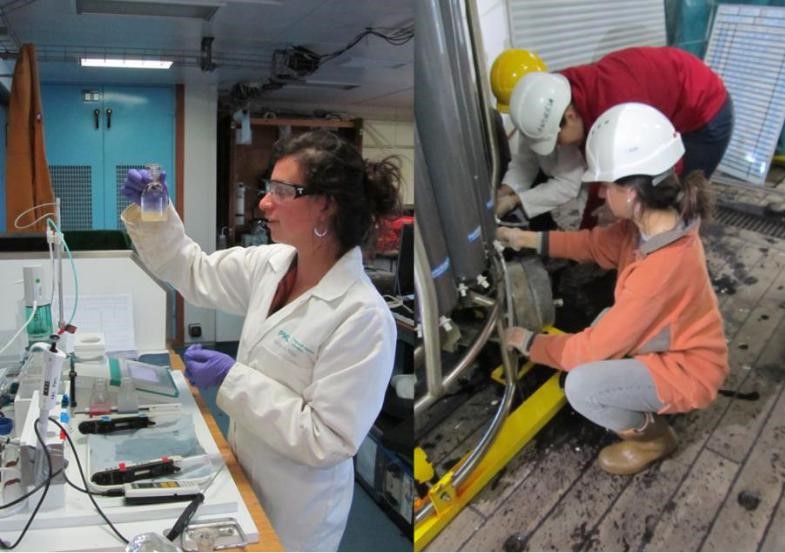 Rebecca May from Plymouth Marine Laboratory taking samples for the analysis of Oxygen and nutrients. (PML)

At 17 degrees south on 11 November 2019, we are close to the centre of the South Atlantic Gyre. Over a year ago, the last time one of the British Antarctic Ships was in this area, it deployed a mooring with sediment traps. These traps are used to measure the quantity of sinking particulate matter to the ocean floor. The sediment trap is made up of an upward-facing funnel that directs sinking material to a rotating carousel of sample bottles located at the base of the trap.

The carousel is programmed to rotate each month, so that the material dropping out of the photic can be measured on a monthly basis to build up an annual cycle of the material being exported from the centre of the South Atlantic Gyre. The traps also have a current meter and Acoustic Doppler Current Profiler (ADCP) which characterise the currents and water velocities around the trap, and can be used to trace the origin of different sizes of sinking particles.

On the Atlantic Meridional Transect, two traps are deployed in waters of 5300 metres. These traps sit 2500 metres above the sea floor. They are weighted to the seabed by iron ballast and chain, and have a series of floats that carry them to the surface when an acoustic release is triggered remotely from the ship. Ian Murdoch from the UK-NERC (Natural Environment Research Council) National Marine Facilities group diligent spends all day with the crew recovering last years and deploying this year’s sediment trap mooring.

Ian Murdoch from National Marine Facilities and the crew of RRS Discovery deploy a sediment trap in the South Atlantic Gyre. (PML)

Alongside the sediment traps, we have also been deploying a series of Deep Argo floats in collaboration with the US National Oceanic and Atmospheric Administration (NOAA). Argo is a free-drifting and profiling float that measures a series of parameters in the upper two thousand meters of the ocean to monitor changes in temperature and salinity. Today, there is a global array of more than 3500 Argo floats that monitor the upper ocean. Up to now, however, these floats have not had the capability of profiling to deep waters. Deep Argo floats have recently been developed that can profile from the ocean to a depth of 6 km, providing us with combined measurements of temperature, salinity, and pressure. On this voyage we deployed six of these floats, which will open our eyes to the unknown parts of the ocean. 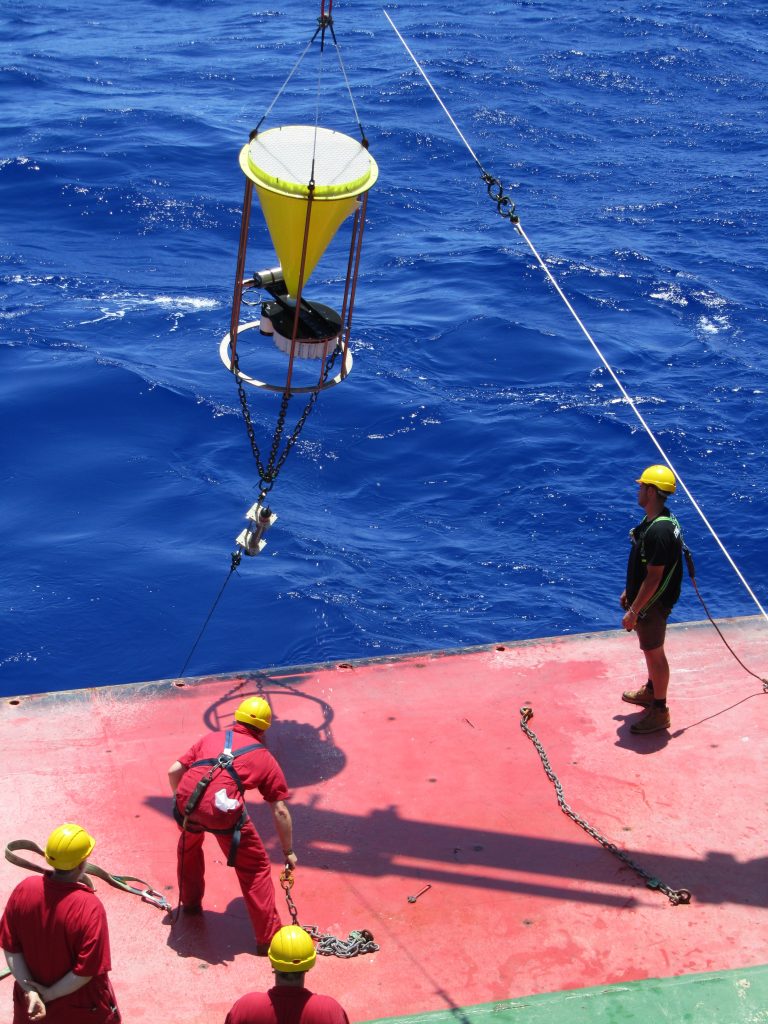