Traversing the Atlantic to measure flux

A group of scientists is again aboard the Royal Research Ship James Clark Ross voyaging the length of the Atlantic as part of an exciting new project to measure the flux of carbon dioxide (CO2) between the atmosphere and the ocean.

They are using a state-of-the-art ‘eddy covariance’ technique to gather measurements to validate a range of satellite data to gain regional and global estimates of this exchange of gas.

These measurements are needed for a better understanding of how anthropogenic emissions of CO2, a greenhouse gas, influence the ocean’s role in the climate system. To date, the oceans have absorbed around 40% of past emissions of CO2. While this has a buffering effect on the atmospheric concentration of the gas, it is changing the chemistry of the ocean.

The absorption of CO2 is causing a gradual increase in the pH of the oceans, a phenomenon called ocean acidification. This is having an adverse effect on many important marine species such as corals, oysters, crabs and plankton, and because of the unprecedented rate of acidification, they may not have time to evolve mechanisms to cope with the changing chemistry of the ocean.

This voyage builds on the work of the AMT4SentinelFRM programme, which made reference measurements at sea to calibrate and ensure the quality of data from the Copernicus Sentinel satellites. This enables satellite data to be used with confidence to address large-scale issues and scientific questions about how the climate is affecting the global ocean.

The current AMT4OceanSatFlux campaign is funded by ESA and is led by Plymouth Marine Laboratory, and involves scientists from the University of Southampton, the University of Exeter and the Institut Français de Recherche pour l’Exploration de la Mar, Plouzane, France (IFREMER).

Gavin Tilstone, Principal Investigator for AMT4OceanSatFlux said, “The addition of eddy covariance data to the range of high-quality measurements being taken on board, the AMT campaign provides verification of state-of-the-art methods for estimating gas exchange.

“Combining multisensor data allows the calculation of global ocean–atmosphere CO2 fluxes, which is central to our understanding of how the oceans regulate increasing levels of CO2 and the extent to which this leads to ocean acidification.

“This large-scale analysis of satellite CO2 air-sea flux estimates has never been achieved before in the Atlantic Ocean.” 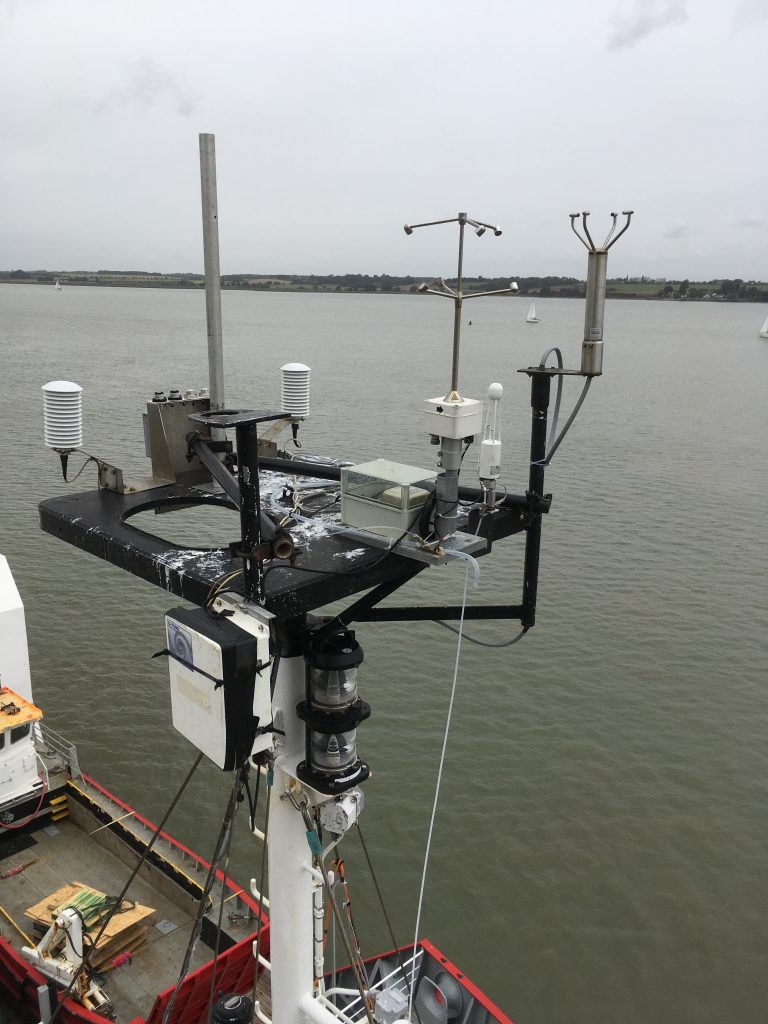 The voyage started at the end of September. With the ship docked in Harwich, UK, the first job was to install all the equipment. With all of the materials and supplies required on board, both scientific and for the ships stores, in preparation for the voyage across the Atlantic Ocean and the summer season in the Antarctic, there was a continuous stream of material being winched aboard. 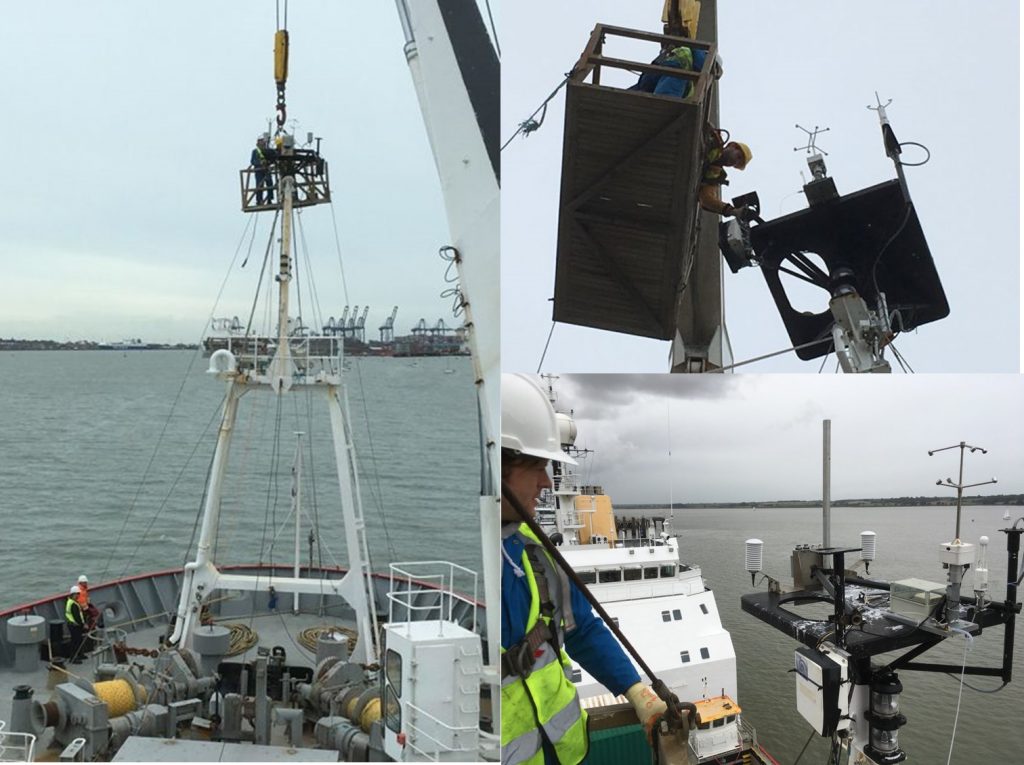 Tom Bell and Bob Brewin from Plymouth Marine Laboratory are winched up to the foremast to install the Picarro Eddy Covariance instrument that measures gas flux of the ocean and the HyperOCR irradiance sensor that is used a reference sensor for measuring remote sensing reflectance. (PML)

In amongst the melee, AMT4OceanSatFlux scientists were being winched up the foremast to install the array of automated instrumentation that comprises the instrument package for this campaign. Instruments include above-water radiometric optical sensors that measure upwelling radiance from the sea surface for validation of satellite ocean colour, infrared radiometers that measure the skin temperature of the ocean used to validate satellite sea-surface temperature, C-band radar which characterises wave properties that are detected by the Copernicus Sentinel 1 satellite, and eddy covariance which is a measure of the gas flux from the ocean.

This involved winching Tom Bell, Bob Brewin, Werenfrid Wimmer and Louis Marie up to a height of 20 m above the ship to install the instruments. The location of the foremast is chosen so that each instrument has a clear and unimpeded view of either the sea or sky. After 2.5 long days in port to install the instruments, lay cables, set-up the computers and power supplies to log the data, the ship sailed into the Southern Bight of the North Sea and to Portsmouth to refuel for the 4000 mile journey ahead.

Sailing out of Portsmouth into the English Channel and the Celtic Sea, coincided with a region of high pressure and clear skies with potential match-ups with the suite of satellites orbiting overhead. Each day, vertical profiles of the water column commenced to compliment the underway surface measurements and to reveal more of the physical, chemical and biological changes beneath the surface lit ocean.

Giorgio Dall’Olmo deployed an optical profiler to characterise the absorption and scattering properties of both particles and dissolved organic material and tests a new filter system so that these measurements can be made coincidentally. Bob Brewin also deploys a small oceanographic floating device, which has temperature sensors fitted to it, known as the Smartfin. It is a simple device that can be fitted to pleasure craft such as surf and paddle boards and Kayak’s.

As the ship traverses further over the Celtic Sea shelf, the Waters become clearer and clearer with secchi depth readings increase from 8 to 14 to 20 m. Once the ship reaches 51 degrees North, the secchi depth increased to 25 m indicating that the AMT4OceanSataFlux campaign has reached the desert gyres of the North Atlantic.

The ship continued south over the equator and into the Southern Ocean continually acquiring data that will be used to validate CO2 flux estimates built from a range of satellite data inputs. The RRS James Clark Ross is due to dock in the Falkland Islands, after nearly 40 days at sea, on 29 October 2018.